RPK's call for vote of no confidence getting support ... 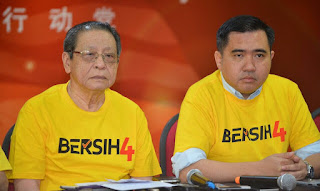 ... but Kit Siang resorted to take it to the streets.

Raja Petra put up a posting early yesterday morning with a theory that Dato Najib have prepered himself for a vote of no confidence for the coming October parliamentary session.

According to his argument, RPK believed Najib is ready to face that possibility. After sacking Tan Sri Muhyiddin, Najib seems to be getting things his way in facing up Tun Dr Mahathir. He foresee Najib would have preferred it and may turn it to his advantage. [Read him here.]

Two days ago, Lim Kit Siang said in a press conference to reiterate DAP's stand for a no confidence vote and remind of IGP Tan Sri Khalid's statement that such a move is not a police security concern. [Read in TMI here].

Surprisingly this morning, quite a few notable pro-UMNO bloggers are supporting RPK's yet another conspiracy theory and DAP's call. Their motive is basically to challenge critics and opposition claim that Najib has lost support as a result of alleged scandals involving 1MDB and RM2.6 billion political donation.

It could also be calling on the opposition bluff but argued as better that than hitting the streets. But why is Kit Siang still insistence in resorting to the streets? 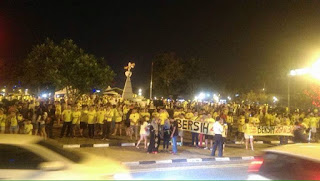 It must be an insult to UMNO because the Dataran the gathering was held is near the first gathering of Malays in front of the Kelab Melayu Batu Pahat to form UMO which later led to UMNO.

By the look of things, DAP has gone all out to get members and Chinese to come out for Bersih 4.0 which will be a 34 hours gathering on 29-30th August to be held in Kuala Lumpur, Penang, Kota Kinabalu and Kuching.

Unlike in previous Bersih, it is only Chinese youth and individuals than turn up. This time it is heard DAP members will be coming out in full force and together with PKR are getting Chinese to come out. He see it as giving the wrong message.

The statement was put up on Outsyed the Box yesterday but he seemed to take it off his posting as fast as he post it. So a copy of the posting is still available on Malaysia Reserve here. Why blog if too afraid to leave it up?

With PAS not expected to participate except for a segment of the renegade Gerakan Harapan Baru and past trend of declining attendance at public political demonstrations, there maybe concern that the numbers will not be as much.

Picking on where Bersih 3, there will be Bersih gathering at all major cities around the world. [See Fuziah Salleh's Facebook here].

Though the number at Kuala Lumpur's Bersih 3 was hardly to shout about compared to the uncontrollable and violent Bersih 2, having it global justify them to claim the participants were 300,000.

With support growing for the vote of no confidence, Kit Siang had to make the hard decision of contradicting himself hit the streets and DAP has to play the torchbearer role in the absence of PAS. One can read his blog here as he goes on his rhetorical ranting on democrasy, right to gather, and it's legality on the police.

It cannot be discounted that Kit Siang could be taken in by RPK's theory that Najib will survive the vote of no confidence and exploit the threat against him. He wrote:


If that vote of no confidence does come in October, Najib will exploit it and use it to his advantage.

Once the vote of no confidence is passed Najib will ask His Majesty the Agong to dissolve Parliament to make way for snap federal elections. Umno will contest the seats it can be assured of winning and increase its seats from 88 to 100-110.

Najib will then give Sabah and Sarawak what they are asking for and win at least 45 of the 57 seats there, maybe even 48. That will give Barisan Nasional roughly 150 seats with at best 72 going to the opposition if MCA, MIC, Gerakan and PPP do not win a single seat.

Aren't you a big mouth, RPK?

No less than his long time detractor, Dato Abdul Kadir Jasin was reported to agree. TMI reported here that Kadir said in forum "Protes Rakyat or Dewan Rakyat" forum that no street demonstration and vote of no confidence can shake Najib. 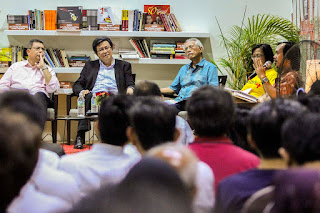 The Bersih 4.0 and the surround events seemed like a deja vu. Kadir speaking at an opposition organised political forum seemed like the time thee fight was to topple Tun Abdullah Ahmad Badawi.

All the Bersih demonstration with it's pre- and post-events, demands, arguments and counter arguments, actions and reactions by authority, organisers and supporters, and even down to the gathering points can only be expected to be a repetition of the past.

As Hafidz Haharom wrote in MMO here, Bersih is repeating itself that after 10 years, they themselves had not developed into anything significant. Same old, same old rhetorics.

With Malaysian ringgit plunging and Najib forming a Special Economic Committee to address an impending global economic recession, it has a similarity to the reformasi era. [read Rocky Bru here].

Though the core members should be different to fit with the different era and challenges. Still Tan Sri Nor Mohamed Yakcop ... zzzzz except the absence of Central Bank Governor, Tan Sri Dr Zeti Aziz is a surprise. Is there a new Governor to come on board?

Only different is the domestic economy then went into a bad spin. There was rising bad loans and business failures due to high interest rate to cushion the ringgit fall and tight credit prescribed by IMF willingly adhered by Dato Seri Anwar Ibrahim.

The young demonstrators at Bersih 4.0 will vehemently disagree out of their own ignorance.

This time Monetarist Zeti refuse to tamper with the bullish trend on the US dollar in the foreign exchange market. She is staying away from the peg and avoid raising interest rate on the money market that will have detrimental impact on the economy.

It is telling when one of his backbone Minister is now viraling John Mallot's article and the article published on Malaysiakini. [Read here].

Tun M did a snap election in 1999 and won with support from the Chinese. The Chinese feared a repeat the Indonesian reformasi will repeat itself here. The reformasi in Indonesia turned violent against Chinese.

Obviously, the senario is different in that department.


That will also give Barisan Nasional two-thirds control of Parliament. If MCA, MIC, Gerakan and PPP can pull in 10 seats combined then Barisan Nasional will get 160 seats versus 62 for the opposition.

The Boffin Boys in Najib’s office have done their arithmetic and they are of the opinion that a snap election can actually work in Barisan Nasional’s favour.

Wikipedia here described Boffin as "armed-forces slang for a technician or research scientist." They are supposed to be genius. RPK referred to HR as leading the Boffins Boys.

The rest of the Boffins Boys is heard to be a lawyer, an international PR man, a developer, and a caretaker. Different war requires a different general to lead.

how Najib going to win in a snap election when most of umno grassroot is going all out to kick him and the boffin boyz out.

they should do it now. since they are confident on winning on even larger majority. why wait. vote no confidence or no vote confidence, to hell with that. dissolve now. and win it bigger. failure to do so in near future will show how ball-less these people are. dont talk about strategy, cleansing, etc.

why walk when you can fly.
or can u really fly? or can u even walk without crutches?
let us see whether its flying or walking or crumpled. dissolve now.

if they dont do it then probably its a public admission that they are admitting they dont have balls for it. half past sixes? ball-less? the ball is in your court man.