The Decline of Malaysian Chinese 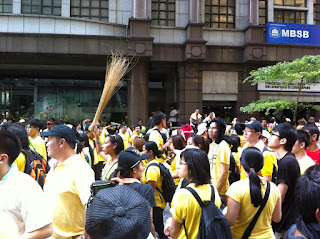 Malaysian Chinese are in fast decline – no thanks to the persistent efforts of a devilish party the Democratic Action Party (DAP) in sowing seeds of hatred into the Chinese minds.

The DAP zombies, will of course jump up in rage and hurl profanities at me. Well, I am immune to their daily dose of poisons. One day these DAPigs will self implode with poisons.

The Malaysian Chinese are in fast decline because many of them, precisely the DAPigs do not have the ability to think rationally anymore. Many of them are themselves a product of pampered childhood and they continue this with their own children. 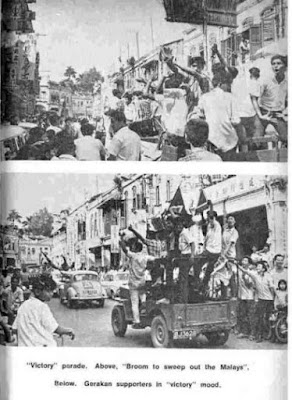 Yes, I am one of the dotting parents – loving and pampering my own children so much – and that’s why I am also worried whether this is the right parenting. So I have to occasionally steer them on the right path.

I put up our National Flag from the window of my master bedroom for the first time in 23 years we have stayed in our main home, because I felt the urgency to do it, to show my children a glimpse of patriotism. Whether they will listen or follow me is a very individual thing, but at least I know I have done the right thing.

I do not wish to delve into a philosophical and long-winded discourse into why I feel the Malaysian Chinese is in fast decline – in practically every front.

I only need to give you a few recent normal conversations I had with my own Chinese.


A woman: “Oh, the Bersih 4.0 Rally reminds me of those student rallies in Shanghai in the 1940s, carrying banners and placards. They marched bravely on the streets!”

Me: “Please, those are anti-Japanese marchers. They are true patriots. Bersih 4.0 is NOT. They are out to shame our country. Got it?

2. The Parenting Network (Facebook), one woman (and many like her): “Imported milk prices have gone up so high because of GST and our falling Ringgit…I have to give starch to feed my children!”

This Parenting Network in which I had recently left seems to me to be used as a subtle front for anti-government postings and comments.

Me: I feel today’s Chinese parents especially those in their late 20s right up to 40s (all young enough to be my children), complain over every little things.

During my late mother’s time, there was no such thing as imported milk. There was no cooking gas and during my early childhood, I saw her using wood and charcoal to cook. She sweated to make the charcoal burn. She also has to slit the chicken’s neck to let the blood ooze out, coagulate the chicken blood for food and she also has to boil the chicken to pluck the feathers. You can imagine when she was a child, the kind of life she led. Yet she lived up to the age of 90.

Today, many Chinese with dual income and many earning good salary/income still complain. They complain of this and that and curse the government. They are angry with GST but yet they drive new, expensive cars and buy RM800,000 to over RM1 million homes and yes deep in debts.

They readily condemn the government school and education system and worship the international school system, and of course, they have to pay expensively for it. Then when their budget is tight despite earning six figure income, they blame the government.

Why, because they cannot practice discipline, and personal financing well. I am a retiree, and not earning anything. Yet, I still have saved enough to treat my family at least twice a month to good meals at five-star hotels. Why?

I manage my finances well, I am debt free and I live below my means. My EPF dividends which I do not even take out but allow it to accumulate, is earning me more than some general managers earn in a year.

Although I have been a salary worker all my life and not even in management position, I do not buy new, expensive cars. I owned only one brand new car, a Proton Iswara (now sold) my entire adult life. I drive second hand cars and I buy my first home only at age 37. I had suffered hard times but I don’t complain the way the Chinese do these days. I practised deferred gratification.

Many of today’s Chinese only read thrash news, mainly propaganda from the DAP and yes, those Bullshit books by my former schoolmate Kee Thuan Chye and already think they are so well read.

3. This brings me to my former schoolmate Kee Thuan Chye.

He is very good with his pen. A prolific writer. In fact, many of his points and very sarcastic remarks hit bullseye and perhaps that’s why his book sell like hot cakes. I wish him luck.

But there was this incident on my OldFreees70/72 blog that infuriated me. You see, I had even gone to his book launching and autographing ceremony at Borders, Gardens Mall with my family to give him moral support.

Although I know his anti-government sentiments, I put that aside to show him support as an old Free (Penang Free School). Yet, later in the OldFrees70/72 blog, just because I differ in opinion, he called me an Umno cybertrooper. I don’t mind if it comes from those zombies, but I felt deeply wounded that he insulted me in front of my own fellow Old Frees on the Internet.

He is no longer a friend. In fact, I took his autographed book – No more Bullshit please, we are all Malaysians – that I bought and for the first time, burnt it outside my garden. I love books and will never burn books but because of this guy, I did the unthinkable.

So yes, he is one Chinese who has declined in my eyes.

4. A wealthy Chinese woman who earns millions wanted to take part in Bersih 4.0 Rally. She owns dozens of franchised retail outlets. Despite making good because of our nation’s peace and stability, and despite that she is well travelled, intelligent, a socialite etc, she cannot even differentiate between patriotism, loyalty and political views.

Her husband worried that she would take part quickly flew her off overseas. Another example of Chinese “decline” in mentality.

This is a posting on the MyNation blog that was shared by Lim Sian See in his Facebook. Feel free to comment but be reminded to "Plainly state your opinion, even if it differs. No hostilities, insults and bad languages be allowed release." This blog is already strict on it. No compromise and negotiation.


If there is some insane need to spew profanility, try at MyNation blog since Cheah Sin Chong is immune to such poisons from such uncultured individuals. However, he is still human and will have his limits to such unMalaysian DAP behaviours.
at 8/31/2015 02:36:00 PM

I have same thought that most young chinese being pampered too much, unpatriotic. During my school days i had many friends from other races, i loves ftiends with them, but now not anymore because mostly during conversation with them they will critisize the government, as though there is no good deeds from the government.
Thanks dap u succeed to made the chinese downgrade the government and good luck for next pru 14.

I agree with most of the post. Especially not happy wit those who use vulgar or profane language

It is a great pity that the present BN Gomen cannot take advantage of the fiasco befalling the opposition. I have been a BN silent supporter all this while....there is a lot of good things that they have done...of course there are also fiasco...but to errrr is human. However I feel deep sadness when the most recent fiasco involving this duit derma falling into Nagib Razak personal account and he do not deny it only saying that the monies was not used for his own benefit. OMG....and this come from the highest gomen employee in the land. En Nagib, irrespective weather you use or do not use it....it is ethically and morally wrong to have committed this offence.

I know that the opposition also rcv donation money straight into their pocket - even though they will deny it - but they are the opposition. I do not vote for them because of what they have done and become. I vote for the other good guy....however to have been told that the other party / good guy is also doing the same thing.....that is the ultimate betrayal of trust. You sir are no better then the party that you scorn. You have lost the Moral Highground that the previous PM before you have defended tenaciously.

I will still choose BN over the other parties because I believe that this is the last best chance for coporate governance that we Malaysian duly required. However I preferred a BN without Nagib Razak at its helm......

Anonymous said...
This comment has been removed by a blog administrator.
7:38 PM

Anonymous said...
This comment has been removed by a blog administrator.
8:48 PM

I for one grew up in a Chinese community. I loved them because they were just like us Malays, tolerant and understanding. But ever since DAP started the hate UMNO campaign, things have gotten from bad to worse. Inspite of all the insults and vulgarities, the Malays have showed calmness in their retaliation. But of course patience has its limits.

The Chinese forgot that they are playing away to the Malays but DAP has done a good job of indoctrination and the Chinese are so engrossed with their swollen ego that they won't remember.

The Malays will retaliate because they will always remember what the Chinese did to them. What, when and how will always be prime question. Why ??? The Chinese should know better.

The rot has already begun.

Agree with your strict moderating of comments. All bloggers and facebookers should do so. It's incests like these that are misguiding the public out of it's sensibility.

eh u arguing straw man again? The fact of the matter is Najib is not accountable for the USD700m and at the same time remove all who "question" him. Isn't that suspicious? Not only to the Chinese but to many Malay and Indians too. And now openly said at TI event in of all places KL.

Stop trying to misdirect the matter to race when the USD700m is still not answered.

Who said at the TI event? Does he has credibility and facts at his fingers?

Hope you are not chinese because many chinese openly admit that chinese is the most corrupted race in the world. They have no credibility to complain of corruption because every other chinese practises it.

I think you are chinese because typical of the sensitive chinese type, they only criticise others but have a hard time looking at themselves in the mirror by their own or by others.

I believe this posting got no mentioning of najib or 1mdb or 2.6 billion and is a subject of its own on certain segment of chinese's attitude as reflective of bershit. Have been taking drinks too early in the afternoon, have you?

We are letting these two comments go but it's still bordering on hostilities. Since it is not name calling and cursing, we allowed it as just hard hitting.

Anonymous said...
This comment has been removed by a blog administrator.
8:58 PM

Tut tut ... No need for hostilities, insults and bad language. Not a sentence, not even a word.