Sky may have fell on Sofia Jane BUT ... 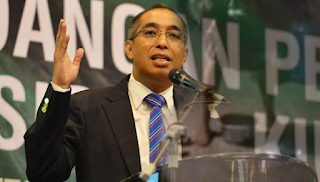 ... she's not about to give up. Salleh is being set-up as new nasi kangkang victim!

Continuing from where we left Sofia Jane here and here, it is heard that Dato Ahmad Shabery Cheek called several UMNO elected reps for closed door meetings to get their opinion and feedback on the proposed amendments to the 17 years old Communication and Multimedia Act.

In one of the meetings, legally-trained Dato Azalina Md Said attended. COO aspirant, lady Sofia Jane or as the gossip along the corridor in this agency's building would refer her as #sj was also in attendance.

Azalina raised matter on the provisions incepted in the CMA. Sofia Jane was blasted right in her face for the deficiency in the interpretation of the CMA and inadequacy in execution.

For someone aspiring to be COO as the next step to CEO upon the amendment of the CMA to decouple the executive role of Chairman to reassign the role to a CEO, it was a shameful moment indeed.

Despite trained as a lawyer and is overall head for adminstration which include the legal team responsible for CMA, her incompetence was glaring.

The Malay has a saying, "Sudah jatuh ditimpa tangga". It is Murphy's Law of when something wants to go wrong, everything will go wrong.


Sofia Jane had worked her way to the hearts of the Minister and agency Chairman by charming her way with the metaphorical nasi kangkang.

It is said she is already chummy-chummy with Shabery and by the look of things, she is destined to be allevated to COO after the amended CMA get passed in Parliament by the end of the year.

Shabery was transfered to Ministry of Agriculture and in his place is a strong Dato Najib defender and blogger in former Sabah Speaker, former Chief Minister, and now Senator Dato Salleh Said Keruak.

Prime Minister Dato Najib wants tougher acts on the excessive abuse of the Internet. He has voice aloud against the utter abuse, misuse and slander that goes around social media which in many times already breached national interests such as threat to internal security. Now, it tantamounts to threat to the economy. [Read MMO here and also yesterday's posting here.]

Change in leadership at MCMC has yet to see any change in attitude [read past posting here]. Salleh has to deliver this time. As they say, new broom sweeps clean and he will find out why the well provided CMA was not strictly enforced.

If Salleh is made aware that the slack in the enforcement points to Sofia Jane's incompetence, it is like putting salt in her wound. The sky already fell on her and she fears she will not be in the running at all.

Salleh will have his own criteria for the new COO. The position comes with the power to regulate and have management recommendation powers on licenses to be issued.

It  would have suited Sophia Jane's high taste lifestyle since it would be complemented with pandering  treatment from the industry players as they would butter up to her for favours. Being an opportunist and capable manipulator, she could gladly 'create' avenues for such buttering up moments be made available as options for 'industry consultation'.

Sofia Jane knows she isn't suited for the responsibility. One, despite having legal training she never did put her nose to the grindstone when she spend nearly half of her time in the past 15 years globetrotting and jetsetting in the lifestyle with an expense account.

The enforcement should have been taken care of, especially when there are already sufficient existing laws to deal with these feats which deemed as anti-national.

This lack of competent performance in leadership and inadequate interpretation of policy which is translated in below average execution, especially in regulatory duties is probably the reason behind last week's Cabinet reshuffle. 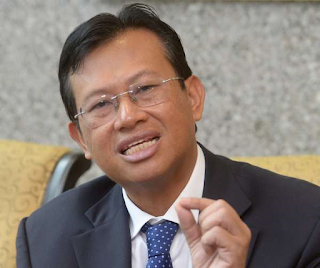 Many could be said about Shabery's former Ministry.

The power invested through Communications and Multimedia Act (CMA) is enormous. One is not talking about licenses and permits that could be issued which itself are opportunities to litterally print money, considering the growth of all communication related industries and near exponential growth of paying consumers.

Take mobile connectivity. There are already a third more lines compared to the number of inhabitants of the land. The very steep growth of social media users and accounts is reflective of the money generated from connectivity and data uploads/downloads.

Naturally, this new available 'Democracy via ICT' is an enabler for various very sharp tools that could insult and antagonise the social, cultural, political, racial and even belief harmony and stability this nation of vast multiple background and decandency.

In fact, it happened to many times of late. Access to information via social-media-enabled mobile devices made near lightning speed of information being passed around. In the lingo of the day, viralised.

Usually its information in the nature of dubitable, equivocable,  sensational, controversial and even contentional which made its way through a process of addendum, which not only distort the story further but worsens the situation.

This peril of the powerful double-edge sword in mobile and broadband connectivity could be dealt with sufficient and significant examples of enforcement since total enforcement is near impossible.

However, despite having the powerful provisions enacted by Parliament, Shabery's former Ministry agencies failed to make the CMA a productive tool for progressive use of communication and connectivity.

He had given indication from his re-appointments to the Ministry that he is not focus on his mission [read past posting here].

This shameful defect of enforcement did not go unnoticed, especially by UMNO leaders. Thus for the meetings with UMNO elected reps.

Salleh knows he needs to get tough by getting the right man on the job.

Rumours has it the Chairman who should have been a retired civil servant ten years ago wants to throw in the towel. He should get someone who can balance between industry competency, technology driven and CMA literacy to fit into the CEO/COO post.

Sofia Jane could kiss that COO post goodbye. That is unless she could stop Salleh from knowing what is going on.

For the time being, the typical Melayu in the agency will be too afraid to stand up and tell for fear that in the event she do move up to COO post, they may end up being send to freeze in the cold CPU room.

In the meanwhile, Sofia will be testing out and researching on Salleh's character, his likes and dislikes, his weakness, and she will be on the look out for any peculiar behaviour. The usual formula with Semenanjung boss will not apply. Sabah could be different. There are many tall tale stories of Sabahan and their mystic abilities.

But Sofia Jane will neither be disheartened nor give up. It is not in her vocabulary. She will get the right potion and try a new concoction of nasi kangkang on Salleh.
at 8/04/2015 12:54:00 PM

Can #sj's semenanjung bomoh take on a sabahan?

Dunno abt the rest but salleh orang jaga solat bah