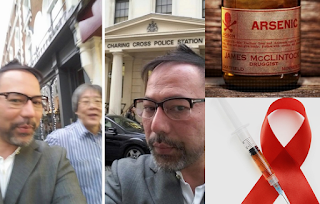 Ever since Dato Khairuddin Hasan and Matthias Chang made their trips to few overseas financial centre to make various report to foreign authorities, there have been a deluge of unsubstantiated reports on Dato Najib and 1MDB.

WSJ, whose rather fond of Malaysia these days, reported of responsive investigation, accounts frozen, Najib-owned company accounts in Hong Kong, and the latest unpaid money due to IPIC for US$1.3 billion and later an additional RM1.0 billion. [refer to 1MDB's reply to the allegations here and here.]

Over the weekend, Washington Post and several other foreign media called on President Obama to severe relationship with Najib.

One pro-Tun blogger proudly put up postings on the list of foreign news agencies giving negative report on Malaysia including the unconfirmed WSJ report of FBI investigating Najib.

As one of the early cyber warrior from the reformasi days, he failed to realise that they are emulating reformasi play-by-play. Reformasi painted perception of CIA and FBI investigating Tun M, and now same by Tun M?

Maybe it's in the plan to pressure Najib internationally in the same vein as Iraq's WMD. Perhaps someone learned a trick or two from meetings with Saifuddin Nasution, Johari Abdul, Azmin Ali and Rafizi Ramli in various places, including London and Yayasan Perdana office in Putrajaya. [Read past posting here].

Expect Dato Khairuddin Hasan to come out of remand to claim arsenic poisoning from the walls of the police lock-up. Not too far fetch, this cousin of Anwar Ibrahim could claim being injected with HIV virus. Second wife and actress, Ummi Aida to do a dramatic command performance to reveal it.

To the keen and not so gullible, it is glaringly noticeable Tun M and his team is behind the foreign media negative report. The reason it was pre-empted with the excuse Najib blocked all avenue to speak. Same trick applied from Pak Lah's days but only not true this time.

The sad part is Tun M was the person who taught Malaysians not be treasonous in consorting with foreigners and foreign media to undermine the country. Here it is he himself ending up the person breaking his very words.

And, his name or the names of people linked to him surfaced everywhere for consorting with foreign and local personalities and media people that are clearly linked to foreign covert operations and subversive elements dedicated to break-up the nation.

One may argue it is necessary evil to topple Najib but using Gene Sharpe's color revolution and reformasi style demonstration is an act of toppling the government. [Good to read Rockybru here on reason for Khairuddin's arrest].

Tun M's team aren't concerned with getting their facts right or arguing consistent with court practise on evidence.

Some turned angry when being engaged for an intelligent debate. For lack of education, they are incapable of being thorough and have understanding deep enough with the whole picture clear. They could only see from the limited scope of getting the right angle and sensational headline to get their report published in the print media.

As much as facts does not matter but their compromised principle, they are as RPK rightly described as merely playing the game of perception [read his latest here] and doing trial by media in the court of public perception.

It means truth does not matter. And they are not concern with it too but to only bring Najib down by any means. It also explains why no interest to answer with evidence on the 7-months accusation that RM42 billion lesap and the insistent MACC-denied RM2.6 billion "donation" was linked to 1MDB.

Such attitude is antithesis to greater maturity in politics and bringing Malaysia towards Vision 2020. It is third world politics of taking advantage on the gullible masses.

Before anyone play the paid defender of Najib accusation game, read back our concern in the past posting, No solution in sight.

The gullible masses may not realise but it is beyond the FBI jurisdiction to investigate into Malaysian cases. For them to do so, they will need cooperation of Malaysian police and other local enforcement agencies.

As part of his drama act, Khairuddin's chief lawyer, Matthias Chang claimed the arrest was made to stop their meeting with the FBI. If FBI was keen on the case, these obsessive crime and murder mystery solver will come to Kuala Lumpur. Furthermore, they have global network. Find out what Hoover did for FBI.

Firstly, there is the possibility they may have no plans to go to New York to see FBI but was only giving excuse to run away from the hands of the law.

Supposed they plan to, then it is likely that they need to convince FBI that there is an issue to be investigated. It means what had been provided are not convincing or of no value to American or FBI interest.

Will the American not take cognizance of the interest and face of their friendly allies, Saudi Arabia or Qatar?

Someone should ask how Xavier Justo end up getting caught and jailed in Thailand?

For Tun M to extend the lies, it is cheap politics that seize on public ignorance, an abuse of his statesmanship and unbecoming of an elderly person. How in hell would Najib be arrested under ICC's diplomatic immunity?

Many years ago, a Congo Ambassador was caught smuggling drugs for distribution into Belgium but the Belgian authorities cannot charge them. Unless Najib committed crime against humanity like mass murder, genocide and such, it won't happen.

Former head of state have a certain diplomatic immunity. If Tun M need to see Najib arrested and investigated, a certain southern hemisphere country would like to take a crack at him too.

From the practical standpoint of view, no Prime Minister or President have ever been arrested while in office and with their power. It makes no sense for any so-called claim that Najib tried to thwart attempt to arrest him.

They usually get arrested and charged when out of office.

In a previous posting here, we suggested learning from the Thai in countering color revolution. Tun M should learn from the Thai in getting Yingluck charged in court. He should bring Najib down first!

Maybe he is trying to.

Hopefully he will get Najib charged after toppling him because the last time around, he stopped seeking for charges against Pak Lah and Khairy. It happens so often in all the color revolutions - ACCUSE, TOPPLE AND FORGET.

By the look of it, RPK observed that Tun M looks sadly desperate and approaching futility [read here]. Najib will remain in office till next General Election and the pro-Tun will have their prayers to see BN lose answered.

Off course, just being sinister there. Election is a game of numbers. Do they know the numbers or it is just game of perception?

However, Tun M has one way of getting Najib to fall.

As what Tan Sri Zeti was quoted saying by pro-opposition media yesterday for 1MDB to explain, Tun M should be a gentleman to explain himself and put out his evidences.

His accusations hidden as questions have been replied but he is insistent. What more with him not trusting Auditor General report. The onus is now on him to prove.

Hope the people around him removed any attitude of painting anyone not blindly following him as traitors or paid mercenaries and bring forward this suggestions.

Few days ago we sent a sinister message to a political source that swore by Wall Street Journal report. Response has been silent.

His argument was similar to Dato Ibrahim Ali believing the 1MDB accusations just because Tun Dr Mahathir and Tengku Razaleigh said so. It is fine to take account the credibility of one's source but loud mouth must understand the facts and comb through the reports before talking.

It has to be factually right and make sense. Otherwise, they are in dire need for treatment of a Malay pychological disease called feudel blind loyalty.

Expectedly, there will be those taking the road to argue Najib should sue WSJ. Why be dumb?

Like Khir Toyo whose final judgement is due at 2:00 PM, judgement takes forever and Najib would find himself losing his Prime Ministership. His replacement will not give way should he be acquited.

The political style argument to reply would be why not Tun M sue Barry Wain for accusing him of swindling US$100 billion?

Since the RM2.6 billion is about political funding, sue those asking why only RM1.2 billion money was handed over to Pak Lah when UMNO used to own the Fleet Group business empire that must be worth say RM100 billion today.
at 9/22/2015 10:54:00 AM

Anonymous said...
This comment has been removed by a blog administrator.
12:08 PM

Anonymous said...
This comment has been removed by a blog administrator.
2:13 PM

A good write up but what about Zeti saying that 1MDB is making the Ringgit weak?

This Khairuddin Abu Hassan is just a political animal who want to enjoy high life and be in good cosy jet setter. He can claim to his wife that his flying on private jet plane first class treatment and staying in 6 star hotel all paid for. Oh yes he will definitely ask for cash expenses in the range of 20K ringgit minimum some expenses. His wife shall miss this gossip once he's in jail.

He don't give a damn about Malaysia or melayu.

since when politic is clean ? the main concern is Malaysia.. not Najib nor Tun... if najib has to go then let it be


My memory might be failing me, but I don't recall of ever reading about a state-owned company during the premiership of Dr M getting entangled in a whopping RM42 billion quagmire. That within a five-year period of being set up, too.

Nor do I recall any instances of Dr M pocketing the ridiculous amount of RM2.6 billion of purportedly 'derma' money for the party into his personal bank account.

The sly, old man must be pretty cunning and pulled the wool over our eyes, eh?