It's not our field of expertise but just sharing some interesting thoughts.

Once in a while, it is great to attend conference, or seminar or forum to refresh and update oneself. Thanks to an inivitation from Wanita UMNO, we got ourself a spot at the World Communication Forum Kuala Lumpur.

The Kuala Lumpur Conference is organised in conjunction with the WCF Davos. It was held at the PWTC. So we've earned our keeps for the free meals, few songs by Siti Nurhaliza last night and most importantly the knowledge.

And, we saw an idea we had during the Dotcom boom in the 90s, but we've said to "forget about it", is now happening. A chap sold off his developed product for US$2 billion before commercialisation!

Anyway that was not the reason we went to WCF but to pick up few pointers on the latest in the specific areas of crisis communication and managing reputation. 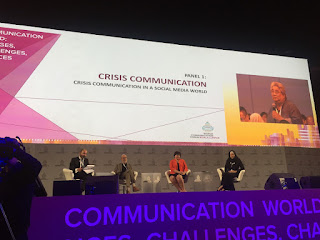 During the crisis communication session, one participant posed a question.

He commented about the American speaker, Allen Mayer and Ukranian speaker, Yaryna Klyuchkocvska was more into averting a crisis and another was in a war mode thus more of a propaganda style crisis communication. In a subtle manner he refuted Yaryna's attempt to explain Ukraine's side of the MH17 crash by saying your problem was CNN.

What would the solution be for a crisis situation where it has reached the point where public has reached irrationality, beyond reason and lost trust to any attempt for explanation?

Allen Mayers, whose client include Hollywood celebrities, was saying the root cause of crisis are mostly self inflicted and social media enforced. He had been promoting prevention and avoiding mistakes, thus his answer was simplified as it's a credibility issue.

In an almost macho cowboy manner, he basically said you are in a dead meat situation, so there is no solution but resign.

What was not told to the cowboy was the situation may not be a credibility issue but effective propaganda by the other side and poor communication by a gun slinging hatchet man claiming communication man.

OK OK .. some will say it the truth. Fine, is there sufficient evidence and can it hold out in a court of law?

Yaryna had undergone the emotional ordeal to defend her country, which she claimed was in crisis from the Russian propaganda, offered a solution.

Own up, come clean, no spinning and no cover-up. Show sincerity. There is a chance of winning back the trust. Then work on it from there.

In her presentation, Yaryna gave some good pointers on crisis communication:


1.  Offense is better than defense
2.  Truth does not matter. Stories do. No answer will lose credibility.
3.  Truth is never simple. The simpler story wins.
4.  Develop a story and stick to it.
5.  Persistently generate newscycles.
6.  Engage stakeholders
7.  Package information for easy consumption. Info specific.
8.  A crisis can be an opportunity
9.  Pre-crisis track record matters. Crisis is not time for PR.
10.All communication are crisis communication. It has to be fast.

Am afraid the third speaker from MERCY lost it all. She was talking about going to a crisis situation instead of crisis communication.

The session wrapped up in a mind map: 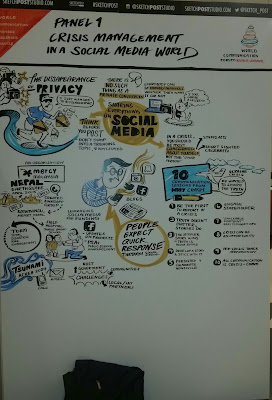 The second session on reputation management was interesting.

The first speaker was a Turkish, Prof Dr Ali Murat Vural. He himself was struggling to communicate with his limited oral ability in English.

His presentation came off as telling managing reputation is everything. Get off your high ivory tower, brother. It's a real world out there.

The two ladies and particularly the Malaysian speaker was impressive. Galina Panina from the Ukraine had a simple answer in managing reputation. Forget about it!

Reputation is verb and not a statement or noun. Why bother but just maintain your principle and be good at what you do. The reputation part will come by it's own.

Something interesting she said which seemed in-sync with the last speaker from Malaysia. "If you have more than one customer and you have a bad reputation, stop being goody goody" What is she saying? 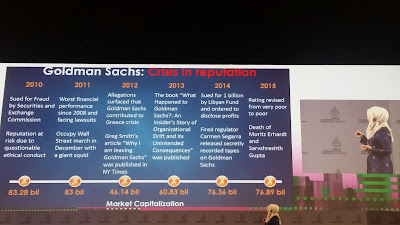 The scum bucket Investment Banker was still making money despite the bad reputation!

However, she gave some pointers on the avenue to manage reputation on the social media: 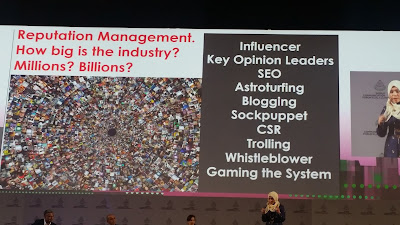 The mindmap summary within for the session: 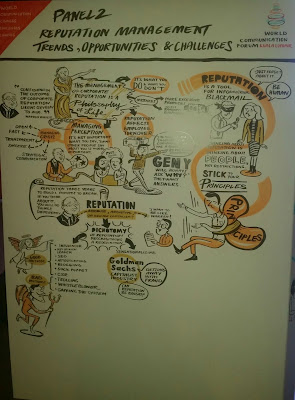 And, there was also Paul Holmes, A PR Guru and writer on PR in the Holmes Report giving the key note speech.

Despite feeling old at 53, Holmes still express curiousity and excitable of the new ideas flowing in the communication world. He highlighted few trends.

Communication is merging with marketing. PR work is now being done by others like Advertising Agenceis, Management Consultant, etc. Traditional PR must be complimented digital and online communication. Relationship is more critical today. Importance of the role of Chief Data Officer.

Holmes talked about brand journalism. The dilemma between fact story versus emotional story. At the end of it all, integrity is everything so do not spin. 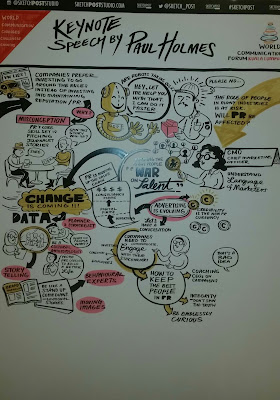 Dato Shahrizat would be one of the speaker today on leadership communication. She should touch on her experience in crisis communication and management.

Habibur too but he is just an idiot.

Fire Paul Stradlen. The guy supposed to transform UMNO ala new Labour. What does this Brit know abt local issues and politics.

No one on earth can make good of najib. You want to know why? Because his closet is open for all to see and what is in the closet is real. No illusions, no cock-ups, just the real deal. How unlucky for him that the guy who opened the closet was none other than the old ex-premier who stuck his neck snd stood up to the zionist.

It is game over so the sooner pink lips realize, the better everything and everyone will be.