No place for royals and politicians in FAM


Malaysia was given a 10 goals drubbing by UAE last Thursday night in the World Cup qualifier.

NST reported the netizen's rage over the drubbing [read here]. It's five days already, but the public is still hurling sarcasm at various parties for the loss.

Naturally, Dato Najib was conveniently blamed. One sarcastic joke made fun of the 10 goals as the much talked about favour in exchange for the RM2.6 billion Arab donation that went into his private account.

1MDB was linked to the loss but the name changed to 10MDB or 10 (gol) Malaysia Di Belasah.

Another joke used the cliche explanation for ringgit drop to explain for the loss. It is not only Malaysia that had poor results but a global phenomenon. Korea beat Laos 8 - 0, Qatar beat Bhutan 15 - 0, Kuwait beat Myanmar 9 - 0, Qatar beat Guam 15-0, and Saudi Arabia beat Timor Leste 7 - 0.

One joke started out sounding like a serious report on resigned coach Dollah Salleh statement to defend his players from the blame of non-committal. At the point it was about to talk of socio-cultural difference of Malaysian youth of today vis-a-vis the past, it strayed to lampoon a song: 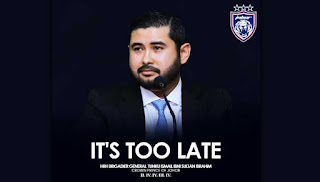 The first to criticise FAM was Johor's Crown Prince, Tengku Ismail ibni Tuanku Ibrahim. He was reported here as saying, "If the head wasn't right, the tail follows suit."

At half time, TMJ as he is often referred to, commented that it was too late to make a comeback from 7 goals behind. And he went on to rant on JDT's official FB, "It was supposed to be an election to change Malaysian football, but now it is too late."

TMJ lost to his auntie, Tengku Azizah's husband, Tengku Abdullah Sultan Ahmad Shah for the Presidency of FAM last year. There is no room at the top for Tengku Ismail despite him being instrumental in making JDT into a football phenomenon with fanatic fans.

He used the opportunity to remind the football management of the country of his presence. 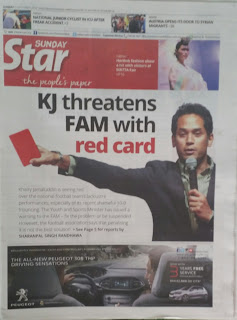 Khairy was taking the opportunity to drive his same frustration to want the sports association in the country to take a more progressive approach in sports management.

Sports and Youth Minister have wanted a complete overhaul of FAM and insisted the President should take action of those around him. He was formerly a Vice President in FAM.

The Star quoted Khairy saying, "After the dismal and shameful performance by the national team, I have almost reached the conclusion that those in the FAM are not fit to be there."

Khairy could be referring to the still in-denial and defensive FAM Secretary General.

UAE has a per capita income on nominal GDP of US$44,770, which is higher than Malaysia's US$12,127. By right, more football talents should be available in Malaysia to be polished into top level footballers.

Excellence in sports has much to do with an individual sportman's individual performance. Sportsman need to have the motivation, enjoyment and sense of taking charge in their sporting pursuits.


To reach the elite level in sports, it requires the right natural ability, emotional and psychological toughness, and discipline.

And to achieve success in team sports, there is planning to be done in putting together a team [read in ASC here].

To enable all these be done, FAM should learn something on management from Coach Bill Walsh, one successful football coach. Only different is it is American Football, not football football.

His winning story was a case study in organisational culture in one back issue of Harvard Business Review [read here]. 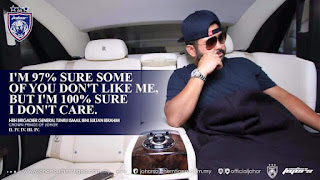 An excerpt from the interview:


Management today recognizes that to have a winning organization, it has to be more knowledgeable and competent in dealing with and developing people. That is the most fundamental change. The real task in sports is to bring together groups of people to accomplish something. In the old days, the approach was rather crude. The organization would simply discard a player who did not fit a specific, predefined mold. If a player did not conform to the way management wanted him to behave, or if he made the organization uncomfortable, it got rid of him. That was the typical response.

Today, in sports as elsewhere, individualism is the general rule. Some of the most talented people are the ones who are the most independent. That has required from management a fundamental change in the art and skill of communication and in organizational development. Most important, there has been much more recognition and acknowledgment of the uniqueness of each individual and the need that people have for some degree of security.

Despite not following local football as used to during the last glory days of Johor FC, something need to be said bluntly and honestly.

Putting aside the technical and operational issues, Malaysian football's inability to harness the talent, develop the sports, raise the levels of sportsman to elite level and putting together a successful management team lies in the upper echelon of FAM.

The association had become a platform for royals and politicians to seek popularity, public presence,  career relaunch pad and other sinister reasons. Sure they are useful to raise money and raising the profile of the sports. However, the poor results is only indicative of poor management.

In the long term, since as far back as can be recalled of royals involvement in sports leadership, has it been a rise up the success chart?

Money can buy instant winning team like instant noodle but it could not develop the sports to achieve excellence on a continual basis. At the same time, someone should audit the money flowing into football. Judging by the poor performance, they could be serious leak.

To address it, there must be a political will to address problems associated with sports leadership. For a start, sports should be lead by those enthusiastic participants and the basic merit in the ability to manage sports.
at 9/06/2015 05:03:00 PM

And to think we pay taxes to keep these people up top, that's just beyond me.

That title is either wrong or misleading. Wrong because the two kinds dont even be on the field when matches happen, and misleading because it contradicted the fact Malaysia had her finest hours in football under the rules of the two kinds people.

Kj, having elected to the vice presidency during Baba was around, should know once interference goes into the FA malaysia will be delisted and will not be recognised at all. He should know that and the fact he tends to be like Indonesia makes the whole matter worse. People dont expect such from someone graduated from oxford.

What you said and what Tengku Mahkota said have all been said before: We say just get the Pahang sultanate to resign from FAM for a fresh start for Harimau Malaya.

Maybe we should send our women's team instead and probably they will do better! Hahahaha. Then the pak untas will be so mesmerised that they forgot how to play football!

S'pore lost to Syria only 0-1. Not so bad considering that the population of the small island is only 5.3 million. And draw with Japan...

"Another joke used the cliche explanation for ringgit drop to explain for the loss. It is not only Malaysia that had poor results but a global phenomenon. Korea beat Laos 8 - 0, Qatar beat Bhutan 15 - 0, Kuwait beat Myanmar 9 - 0, Qatar beat Guam 15-0, and Saudi Arabia beat Timor Leste 7 - 0."

Then Malaysia is in the league of Bhutan, Timor Leste, Myanmar, and Laos... be it in Economy and sport. Soon employment market will follow. Don't you all get it.