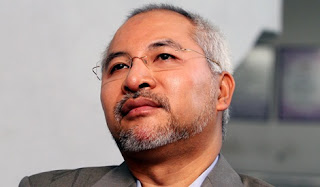 Since charged in December 2010, the corruption case against Dato Dr Khir Toyo (KT) should see it's finality tomorrow.

Sometimes longer but that is how long cases can take for those wanting to see lawsuit as the deciding factor in a political issue. The very reason Tun Dr Mahathir chose to ignore the RM100 billion swindling allegation by former Wall Street Journalist reporter, Barry Wain in his book.

Maybe it is the common Javanese blood in us. And, maybe the sympathy to a fellow plebeian. Not discounting also, he deserve to be given a second chance after undergoing dugaan (challenges), self realisation, and mending his ways.

Something about Khir Toyo's corruption case does not jive. Love him or loath him, KT deserve justice and fair hearing.

Not that a viral anonymous message entitled When Judges Briefing The Judges received was convincing.

What more the alleged conspiracy of an arranged secret briefing to selective few of the presiding Federal Court Judges by one of the presiding Court of Appeal lacked any named accuser to be taken seriously and is a contempt of court to do so. More so, the accusation of collusion between a Judge and Prosecution need to be substantiated.

The instinct still say something ain't right. From the day the issue of KT's palatial home became an issue, the motivation was suspiciously political. Hidden hands had worked to see KT destroyed to make way for a once preferred someone.

More so, High Court proceeding was seriously suspicious. This blogger witnessed the strange manner the High Court Judge delivered his verdict in an unprepared manner. [Read 2010 and 2011 postings here and here].

Before the Federal Court make their allegedly pre-determined 4-1 verdict against him, hopefully there is the odd chance that Chief Justice and new Attorney General intervene to investigate to the conduct of the case and call for a retrial.

According to a certain unnamed law enforcement sources, KT is being charged under Penal Code 21 involving conduct of public servant. The burden of proof in KT;s case is not heavy as all it need to show was there was a transaction with someone with dealing with the state.

The big irritation with that info was as to how a Menteri Besar could conduct his personal affair since every other person would have direct or indirect dealing with the state government.

Rather a novice poser but there are many suspicious matter involving this case. Just few days ago, a letter of leading defense lawyer, Tan Sri Shafee Abdullah was found in the social media claiming there was factual error in the Court of Appeal judgement. That is serious! 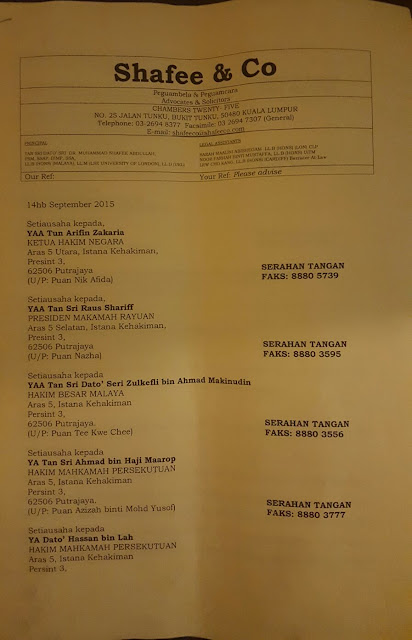 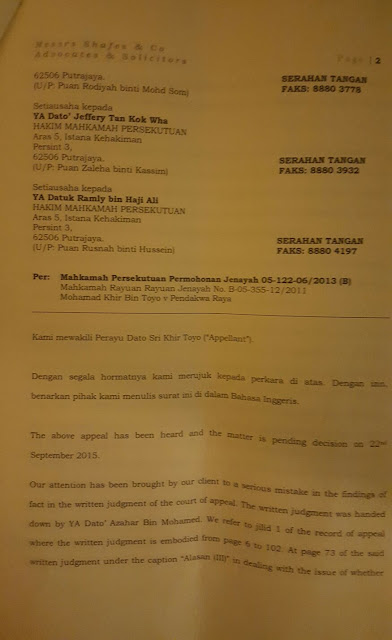 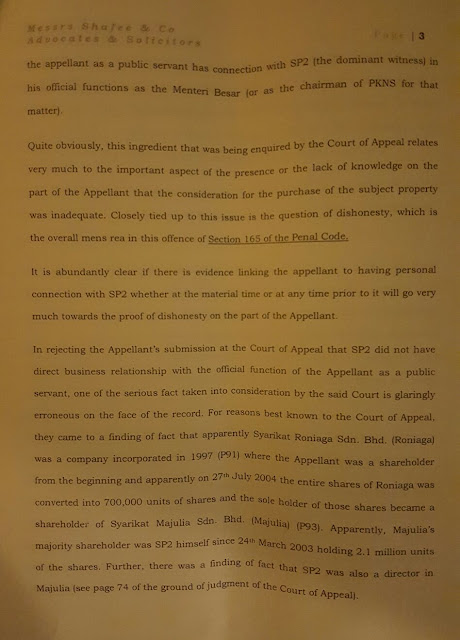 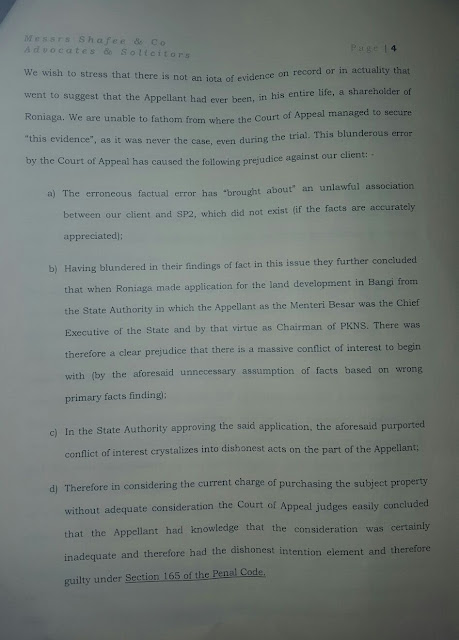 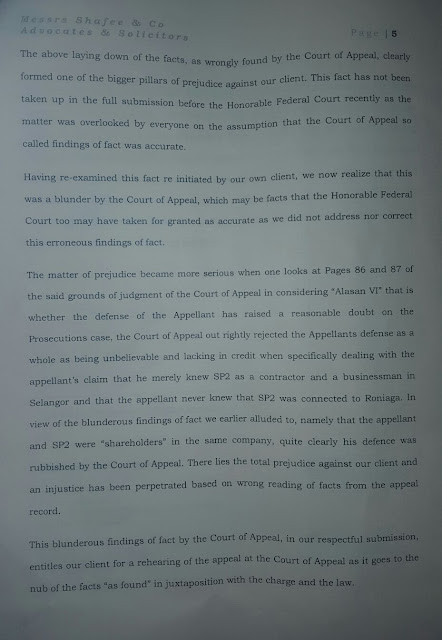 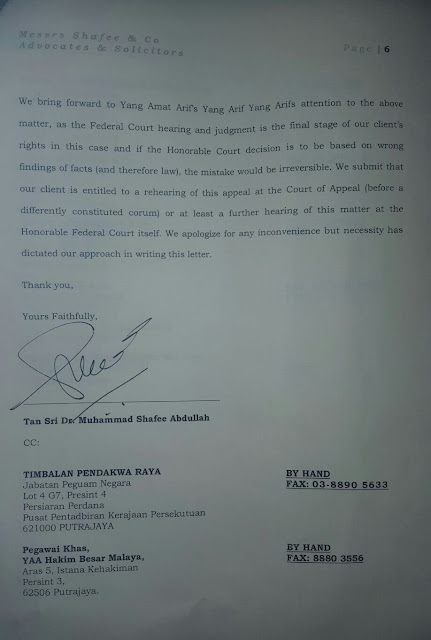 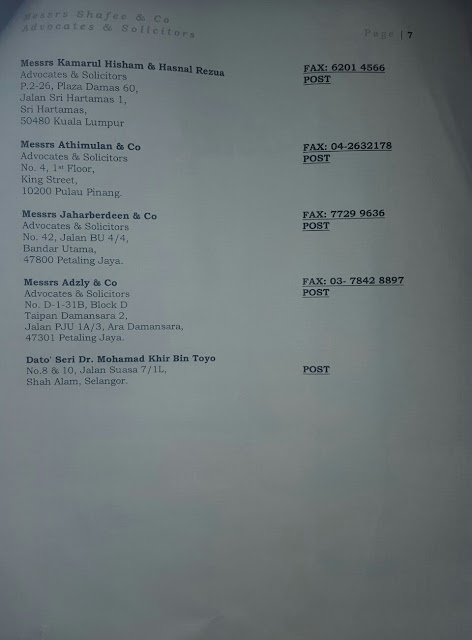 Wouldn't that partially substantiate that suspicion that KT was fixed and will be send to the slammer for a year and home repossessed for political reasons?

Former Attorney General Tan Sri Gani Patail was reported commenting on the case twice in Sinar Harian. Earlier he warned KT for commenting in the media. Is that not Mala Fide or an act done in bad faith or intention?

Sources from the court claimed the leading Judge at the Court of Appeal, Justice Dato Abu Samah questioned the then Attorney General for prosecuting a case that should not have been prosecuted in the first place.

A conspiracy minded person would have been suspicious as to why the result turned out to 3-0 against KT at the Court of Appeal and verdict not read out by Abu Samah but Justice Dato Azahar.

It is a spurious incidence that Azahar rose to Federal Court at Gani's recommendation. But it invites suspicion. More so now that Shafee Abdullah revealed a falsified fact.

The case may seemed acceptable from the legal standpoint but it makes no common sense.

As far back as 2011, it was known that the main witness, Shamsuddin dan Nasir made conflicting statements in court with regard to who paid for the house and how much.

Prosecutor claimed KT forced Shamsuddin to buy the house. In his statement in court, Shamsuddin said he bought the house because it is beautiful and came to see the house several times with his children. Why would Shamsuddin bring his children if he was buying for KT?

The prosecutor failed to prove Shamsuddin got something in return from KT as MB for selling the house "cheaper". There is a valuation report to substantiate the purchase price and for Bank use.

One reporter, unnamed too, wondered as to why KT should be charged. He took Bank loan of RM3 million to pay for the house.

One could never speculate the possibilities a conniving person could do but she felt that it was proof enough for the court to understand the logic that if it was a corrupt transaction, he could have paid cash and used a proxy.

Forget the conspiracy, but the law must make sense.

Just cause he is not the son or son-in-law of a former Prime Minister and merely the son of a Javanese  padi planter in Sungai Besar, he does not deserve justice.

So he was arrogant as MB then, but he is not the first such MB. There are many others far worse than him.

Justice must be dispense fairly. Judges must not do their conduct in a suspicious way and hide behind the contempt of court law. If they do so, there is nothing the common men could do but pray that God punish these wayward judges in their lifetime.

The problem is Khir Toyo is no the PM . What is right is right, should't have anything to do with blood .

I am curious - why are you so interested in this case?

Are you worried that KT hasn't been adequately represented by his lawyers?

If you are hinting at a "conspiracy" to "fix" him, who would benefit from this?

AI has always said that there was a "conspiracy" to "fix" him.

But I don't recall you taking up the cudgels for AI?

Are you being "selective" in deciding what could be "fixed" and what is "for real"?

Anonymous said...
This comment has been removed by a blog administrator.
4:25 PM