Is "Perhimpunan Merah" the answer to Bersih color revolution? 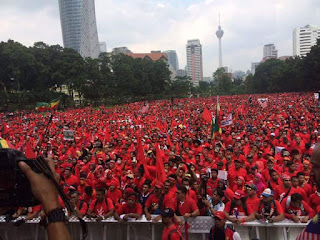 The Russian have long suspected that US covert operation involving NED, Freedom House, George Soros, and NATO were behind attempt to start a color revolution in Russia. [Read here and here]. In Macedonia, Soros was detected to give money to students [read here].

In March this year, RT, formerly Russia Today website reported that the Russian is undertaking a research to counter color revolution. [read RT here]. Part of their strategy would likely be joint collaboration with China as Tass News Agency [read here] reported statement of Deputy Defense Minister, Anatoly Anatonov after the Umbrella Revolution in Hong Kong in November last year.

Already color revolution NGO are being crackdown [read FB here]. More on possible strategy by Rusia in this You Tube here and article here.

Putin have given a stern warning that color revolution will never take place in Rusia. In this news report here, he told security officials:


"People should understand that instigating conflict between people of different ethnic and religious background, the promotion of nationalist ideology, mass violations of public order and calls for forceful overthrow of the existing regime are all ... direct manifestations of extremism."

As written in a previous posting here, Bersih has progressed in accordance with the Gene Sharpe manual from issues of freedom, election and democrasy to calling for the downfall of national leader. It is time for stern action.

Malaysian security official is aware of Bersih as a covert operation with link to NED, George Soros and front NGOs. 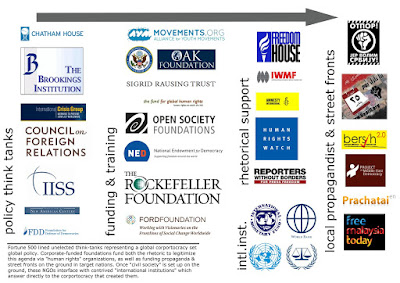 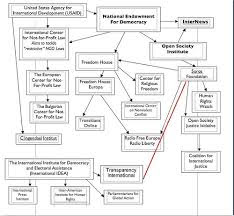 Even Transparency International that had their conference recently and used the occasion to promote Bersih and stooge opposition agenda are linked to NED and Soros.


As per the Russian view, Bersih is viewed as a color revolution designed to bring about regime change.


Forget what Ezam has to say but note the analysis of Dr Chandra Muzaffar. The regime change is to be replaced by someone friendly to them. The hidden hands are seeking to place Dato Seri Anwar Ibrahim as their stooge.

What would government's response to Bersih?

Off course, the action taken by Russia would be deemed to stern and Malaysia need to play this delicately in view of the balancing act between the two superpower of US and China.

An article in Land Destroyer Report of 2012 entitled A Counter-Color Revolution in Thailand? suggested the Thai experience as the counter to color revolution.

In the Thai experience, the pro-Thaksin red colored group were backing a government that was serving as Western stooge. Thaksin Shinawatra's background as adviser of Carlyle Group affirms his affiliation.

As pointed out by Dr Chandra, the interest of the west with Malaysia and Thailand is to gain control of the biggest and most important sea lane in world in the Straits of Malacca.

Thaksin had the support of the west. Edelmen media group's role was clearly seen. He was Prime Minister from 2001 to 2006 and He was ousted in a millitary coup in 2006.

With help from his neo-con allies, Thaksin ran a media campaign against the Thai government.

He operated from abroad to influence Thai politics through his People's Power Party that ruled in 2008, and its successor organization Pheu Thai Party, as well as the United Front for Democracy Against Dictatorship or "red shirt" movement.

He started a color revolution that saw the country's politics split into a conflict between two groups: 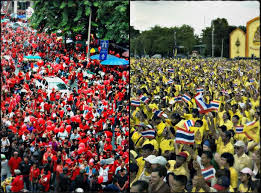 Thaksin group was red and the anti Thaksin group together as a response with the yellow colour. Behind the groups are: 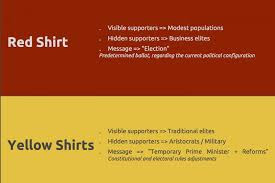 Thaksin could still not return but managed to put his sister, Yingluck Shinawatra as Prime Minister from 2011 to 2014. Yingluck was removed by the constitutional court for abuse of power and is currently being charged.

The profile of yellow and red group in Thailand could not be the same but could the same fomula apply and be the counter color revolution strategy much sought by the Russian and Chinese.

Where the yellow one demanded Najib to quit, the red one is demanding that the democratically elected leader to stay.

Yellow one is not the only people power in town. The red one is also the voices of people power and holding power. Thus far their presence is larger in number though some will intentionally wish to doubt.

And, seen together is Nik Abduh, the Youth Leader of PAS.

By visibility alone, it is fair to say that the yellow ones are not the only representation of rakyat. The red may face critics from supporters of one particular Bersih 4.0 attendee but their visible presence yesterday at Padang Merbuk and at the Hari Malaysia event in Kota Kinabalu is sufficient to say they have every right to be heard too.

With that past, maybe it is time to really test the real voice of the rakyat through their representative. Dato Najib should be a gentleman and go for the vote of no confidence in early October.

It is a good test on Najib's leadership. If he succeed, he has legitimacy to stay and let the people decide on him in the next general election. There is likelihood that Najib will pass the Parliamentary test.

This is despite some non-Parliamentarian in UMNO and Bersih 4.0 attendee is actively in discussion with Azmin Ali, Saifuddin Nasution, Johari Abdul and Rafizi for a collaboration to oust Najib in the manner of Tony Abbot [read CNN here].

Anonymous said...
This comment has been removed by a blog administrator.
12:09 PM

Anonymous said...
This comment has been removed by a blog administrator.
1:00 PM

I see that both the organizer of bersih 4.0 and baju merah just pure dumb. they are not fighting for the sake of Malaysia but merely for their pocket and the master order. dumb pure dumb

Maybe you should update this post when the God-send Green Shirts hold their 60,000 strong rally next.

It shows the theme melayu is still relevent. The numbers are mobilised in 2 days. It is a reminder to kit siang that spirit of dato harun is still alive, ready and willing to take him on. That is why these cinakui are jumping on a hot pan. Like to see that they go down to penang at the real heart of petaling street and bt bintang.

It was said that Annie "took all the trouble to learn about the Malay psyche," by her new Malay boyfriend.

Annie is love with his Chinese (yellow/Bersih) boyfriend. Her new red-shirt boyfriend is more handsome or due to her climatic changes. Hope there be no more Bersih rally, Annie and her new Malay boyfriend will find their true love and live happily ever after.

Besides her love affair, Annie would have acknowledge that the political stability is at stake. An alarm to our racial harmony which is within reach to the reachable.

Mentioning about the Red-Shirt rally, it was perceived controversial in manner, spit and image for racial tones as said.

What is obvious, the rally seems to bring about a political agitation by partisan. It is of everyone concerned. Many come to wonder what is going to happen next after the event of the colors reversal and cultural observance?

My take while waiting for further development of the political color reversals.

The situation now is volatile allocating that the game for power is usurped.

Without doubt, politics and economy are intertwined actuality and inseparable. Political crisis leads to economic crisis. Economic crisis can be overcome within a short time by instituting right policy but it is not so for political crisis.

At the present political scenario, we are going in for a long haul unless the rakyat recognizes the double trouble and endangerment.

God forbids that the preamble is demonstrated by what is happening in the countries and other so called the Middle East conflicts are undergoing political turmoil.

More importantly and I think, we may want to stand up against and champion the avoidance of prolonged political turmoil in Malaysia within Malaysian geopolitical landscape in order to maintain political stability. In mind, we must champion the respect for LAW as our forefathers were instrumental in formulating the LAW that we are observing today.

In reality, there are discrepancy among the ethnic communities. The gap between the haves and the have nots is in realization. Without political stability as such, we have to pay for a high cost of the causes we created. Therefore our survival come what may but whether Malaysia boleh is questionable.

An offence has already been committed and it will remain to haunt the individual who had committed the offense.

Our focus should be on peace, harmony and rule of law to project the image as Malaysians.

For every problem there is an opportunity but one must seize the opportunity. We are here all to be that leaders so that the population on the whole can compare us with all the aspirations.

We have to learn to change our mindsets and outlooks. Campaign for avoidance of state of affairs in other political turmoil countries and respect for rule of law and give the leadership in ourselves at all time to deliberately achieve peace and harmony.

Our fellow Malaysians are in dire need for our leadership to champion the message of peace, acceptance and tolerance among us. In spite of these we still need a prime leader who can inspire us.

This is proof that UMNO is ruled by MONEY.

I went with my own pocket money. Cakap baik2 lebih lagi...