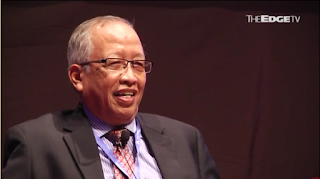 The talk of 1MDB latest appointed member to the Board of Advisory, Tan Sri Dr Samad Alias complaining for not getting brief was heard over the Hari Raya open house.

However, it was brushed off since many politicians, media and bloggers managed to get briefing with 1MDB albeit in various capacity.

It is now out in the open when Samad Alias made known of his official resignation yesterday. Dato Nazir Tun Abdul Razak took the opportunity to take potshot at his eldest brother-led government as he wrote in his Instagram:


“Respected, honest, professional appointed by the Govt and welcomed by the Chairman with fanfare.

“But denied access to information by management. If this is true and tolerated, what message does it send to other GLC’s/agencies?”

It puts into question Nazir's ability in making character judgement. And, how could he not know Samad Alias had dealing as Chairman of PKFZ-linked company, Tadmax Resources Berhad?

Samad Alias joined 1MDB as member of the Board of Advisory on January 29, 2015. Last month on July 2nd, it was reported in the media that Tadmax's sale of their Pulau Indah land to 1MDB was settled.

If the purchase of TRX land by Tabung Haji was made a big hoorah by the blogsphere and media, in which TH CEO, Tan Sri Ismee Ismail is a member of the Board of Director of 1MDB, this went off without a whimper.

Certain political party made an issue of the land purchase because it was a former land associated to the PKFZ scandal. However, it did not get the Tun Dr Mahathir mileage yet.

For 1MDB, the land purchase would be part of it's role to "clear logjam" as enabler of development. It's also sorting out inherited problem from previous administration.

PKFZ was a financial scandal that saw former Transport Minister, Tun Ling Liong Sik charged in court and former Prime Minister, Tun Dr Mahathir appeared as witness. It was a surprise because the real MCA polician culprit was hardly touch.

Ling has been acquited.

Tadmax was formerly known as Wijaya Baru Global Berhad. It belong to the MP for Bintulu, Dato Seri Tiong King Seng. A member of the Board of Director, Dato Faizal Abdullah was linked to the PKFZ  scandal.


"Port Klang Free Zone (PKFZ) is a 1,000-acre (4.0 square km) commercial and industrial zone established in 2004 in Malaysia. It is a regional distribution hub as well as a trade and logistics centre offering extensive distribution and manufacturing facilities. It is located along the Straits of Malacca, Port Klang, Klang, Malaysia. The PKFZ was previously managed by Jebel Ali Free Zone Authority (JAFZA). However, it was taken over and rebranded by a local company in 2007."

"Controversy began when the Malaysian Parliament's Public Accounts Committee met with the Port Klang Authority (PKA), because of dissatisfaction with huge cost overruns amounting to RM 3.5 billion (USD 1.0748 billion) associated with the Port Klang Free Zone. The original cost of setting up the integrated free zone was supposed be RM1.845 billion but increased to RM4.6 billion when the project was completed four years later.

PKA purchased 1,000 acres (4.0 square km) of Pulau Indah land from Kuala Dimensi Sdn Berhad at RM 25 per square foot for a total consideration of RM 1.8 billion (inclusive of interest). Kuala Dimensi made a capital gain of RM 993 million because it had purchased the land from Pulau Lumut Development Cooperative Berhad for only RM 95 million (at RM 3 per square foot). Moreover, the Minister of Transport saw it fit to reject the Attorney-General's view that the land could be acquired for "public purpose" under the Land Acquisition Act at RM 10 per square foot.

In 2007, the Malaysian Government gave a soft loan of $1 billion to Port Klang Free Zone. In the press release, The Ministry of Transport, Malaysia put the blame on the previous regional industrial park management company of Port Klang Free Zone, JAFZA for mismanagement. The PKFZ initial plan was to develop in two phases, covering 500 acres (2.0 km) at the cost of RM 400 million. However, the JAFZA advised PKFZ to develop the entire project in a single phase, costing RM1.845 billion."

The chronology of PKFZ could be found in Sinchew.com here.

The talk along the cafe of politics was that PKFZ was a project used to raise political fund during the previous administration.

So why did Samad Alias as someone described by Nazir as "respected, honest, professional" involved himself in a company with unsavory character like Tiong and Faizal?

And, does his resignation from 1MDB has anything to do with Tadmax after having settled their land sale?

Since Tadmax had involvement with 1MDB, does Samad Alias had no inkling on the background of the buyer to his company's land to complain he was not briefed?

On that claim, Arul Kanda said in a statement issued today:


"1MDB can confirm that our President & Group Executive Director, Arul Kanda, personally met Tan Sri Samad in January and March 2015 to discuss the company's affairs. Amongst other information, Arul Kanda shared with Tan Sri Samad details of the 1MDB strategic review and rationalisation plan. This included a slide presentation which showed the extent of future debt and interest obligations of the company, and a discussion on proposals to address the key issues facing the company.

Not accusing "honest, respected, professional" Samad Alias as breaking the law, but it does appear he may have not fulfill his end of a bargain by washing his hand off 1MDB after his company sorted out their long time problem.

But you must acknowledge that the "full story" of the PKFZ project has never been told in exacting unvarnished detail.

To this day, no one (apart from those in the know) knows why JAFZA pulled out, lock stock and barrel, out of the PKFZ project.

If 1MDB took it on itself to "unclog" part of the PKFZ project, one has to ask how and why the project got "clogged up" in the first place.

Much like one has to ask, in this day and age, if IPIC has pulled out of it's deal with 1MDB (as was reported in a Singapore newspaper and which report has not, up to now, been retracted).

So, where is the "openness" and the "transparency"?

This article is inaccurate. Tadmax made a press release about 2 to 3 months back rebutting the points raised by Tony Pua and in there, you can read that Tiong sold the company years ago.

Faizal Abdullah's presence indicate Tiong-Faizal interest is in Tadmax. The company was put together and listed to dilute the PKFZ land impact and allow them to recoup lost value.

Doesn't 1MDB have an in-house team of experts who can vet these types of transactions?

There is no need to blindly accept the recommendations of an "advisor", no matter how "well connected" he or she is.

Whatever happened to "due diligence" and "good governance"?

You seem to be strangely relaxed about the whole PKFZ imbroglio.

In case you were elsewhere in 2010 and 2012 and didn't bother to google before ommenting, you could read :