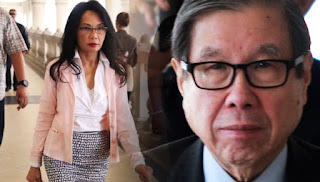 Puan Sri already lost at the Court of Appeal in June last year. The Federal court ruling will mean the trial for their divorce case will be held in Kuala Lumpur.

This blog have been following the case since 2014 to seek answer to an age old corporate mystery as to another shareholder of MUI Group. It has no more political relevance since a recent about turn but the curiosity remains.

Few  months back, there was also a court order in the UK to settle. There is also a concurrent suit on his same divorce case running there.

It was reported two months ago: 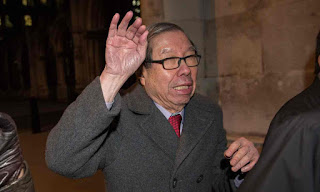 The chairman of the Laura Ashley fashion business, Dr Khoo Kay Peng, has been ordered by the high court to offer his estranged wife settlement of their divorce after running up legal bills of £6.1m.

The 21-day ultimatum delivered by Mr Justice Bodey was said by Pauline Chai’s lawyers to be the first time an English family court had used its powers to force a claimant to “lay out his stall”.

The protracted separation, which at one stage was also running in competing hearings in Malaysia, is believed to be one of the most expensive divorce cases ever to come before the UK courts.

She is the mother of the couple’s five grownup children and says she is entitled to half his fortune. Khoo disputes her claim and maintains he holds assets worth £66m. The couple were married for 43 years.

The gulf between the parties means there will have to be costly investigations to establish the true extent of his wealth – unless they reach agreement. 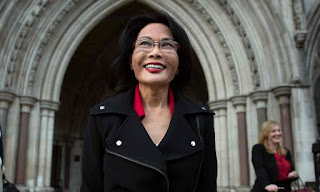 Costs began to escalate when Dr Khoo fought and lost a bid to have the divorce decided in the Malaysian courts. He accused his wife of “forum shopping”, preferring to negotiate a settlement in London where ex-wives of the wealthy have traditionally been successful in securing larger payouts.
Advertisement

Chai, who was Miss Malaysia 1969, won the argument that London was the appropriate location. She argued that the family moved to a £30m mansion in Berkhamsted, Hertfordshire, before they separated. The house became her main home, where she stored her collection of a thousand pairs of shoes in bedrooms, a corridor and the basement.

Ordering “open offers of settlement” to be made by both sides, the judge said at a case management hearing: “I am striving to exercise some control over this titanic case. Otherwise the case will inevitably proceed on its expensive way to the detriment of the parties and the court’s resources.

“The actual resolution of the finances of this couple, who have more money between them than they could spend in their lifetimes, has unfortunately taken a second seat. The legal costs bill is going on for £6m at a stage where the case has barely reached the first fence.”

Georgina Hamblin of Vardags, the law firm acting on behalf of Chai, described the order as the first of its kind in the English court. She said: “It is a monumental development in family law and the strongest possible message to this husband finally to settle this case.

“The wife has been waiting three years for the husband finally to put his cards on the table and make her a fair offer. An English court has never gone this far before and in forcing an open offer sends the strongest possible message that it will not put up with time and cost wasters.”

The couple married in December 1970 and separated on Valentine’s Day 2013. A decree nisi was pronounced in January this year and is due to be made absolute later this month.

The couple bought their first property in England – Wentworth Park – in 1995, and then five years later acquired the 1,000-acre Rossway Park estate at Berkhamstead.

The judge was told Khoo has indirect interests in a variety of businesses through two holding companies in Malaysia as well as substantial holdings in Laura Ashley and Corus Hotels.

The pair are in dispute over the extent to which Khoo built up his assets during the marriage and how much his wife should benefit from them.

Toby Hales, a partner in the family team at the law firm Seddons, commented: “For many years, judges in the family court have remonstrated against divorcing couples and their lawyers for the inordinate costs involved in litigation.

“Although some are claiming that the order by Mr Justice Bodey is ground-breaking, the reality is that the current state of the law and court procedure are likely to undermine his arguably good intentions.

“This is a brave but ultimately futile attempt to bring two people to their senses who are clearly quite content to litigate each other to death. The key question is what the court’s penalty will be if Dr Khoo does not comply.”

Desmond O’Donnell, a family specialist at Thomson Snell & Passmore LLP, said: “The judge’s order is unprecedented and no doubt reflects his frustration with the parties’ apparent inability to reach a settlement, after years of litigation.

“The emotional cost, and more particularly in this case the financial cost, must have been a significant part of the judge’s thinking and the order which he made.”

In KL today, The Star reported below: 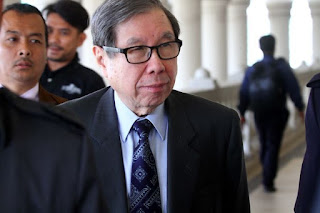 This follows the decision of the Federal Court's three-man bench on Thursday, led by Justice Tan Sri Suriyadi Halim Omar to deny Chai leave to appeal against a Court of Appeal ruling.

On June 19, last year, the Court of Appeal ruled that the Malaysian courts had jurisdiction to hear Khoo’s divorce petition.

The Court of Appeal had also decided that Chai, 69, did not have the right to choose her choice of domicile as the common law rule stating that a wife’s domicile must follow that of her husband, was constitutional and applicable in Malaysia.

Suriyadi, who presided on the panel with justices Tan Sri Ahmad Maarop and Datuk Zainun Ali unanimously dismissed Chai’s application for leave to appeal and ordered her to pay RM20,000 in costs.

Chai, a former Miss Malaysia/International 1969, wanted the British courts to decide on the divorce proceedings as she claimed she had not resided in Malaysia since 1980 and was currently living in England while Khoo, 77, wanted their divorce case to be heard by the Malaysian courts.

The couple was married in 1970 and have five grown-up children.

On Nov 28 2014, the High Court in Kuala Lumpur ruled it had jurisdiction to hear Khoo’s divorce petition and this decision was upheld by the Court of Appeal.

Meanwhile, Chai had filed the divorce petition in a London court on Feb 14, 2013, seeking £500mil (RM2.75bil) settlement. It was reported that Chai would get a smaller portion in matrimonial property if the case was decided according to Malaysian law.

Chai’s counsel, Datuk Seri Gopal Sri Ram, earlier submitted there were three legal questions relating to the issue of common law rule on wife’s domicile which the Federal Court should decide as it would be to public advantage.

He argued that his client’s legal bid was not academic as the validity of the domicile rule would determine if Malaysian courts had jurisdiction over her.

Khoo’s lawyer, Datuk Dr Cyrus Das said Chai’s application for leave to appeal was academic because she obtained a decree nisi from the London court on Jan 7, this year.

He said the legal questions posed by her counsel for the Federal Court to determine were no longer relevant to her since she had elected to get her relief from the London court.

Outside the court, Das told reporters that following the Federal Court’s decision, the Court of Appeal judgement stood and his client would be allowed to proceed with his petition in Malaysia, which was filed in December 2014.

Meanwhile, Chai’s lawyer, New Sin Yew, told reporters that at the same time, financial proceedings were currently ongoing in the London court for the purpose of division of matrimonial assets. – Bernama