1MDB: SC's incompetence and too much politics 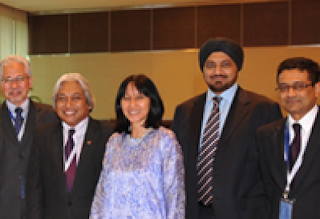 Assuming the US Department of Justice got their facts and evidence together, though it is still no guarantee to be true judging by past KARI record, part of the alleged laundered money may have originated from few bond issues.

The 1MDB bond offers was made out and subscribed. The money went into an account abroad and allegedly went all over the world, including allegedly laundered into assets purchased by the four; namely Taek Jho Loh, Riza Aziz, Khadem Al Qudaisi and Mohamed Al Husseiny.

That is what was made to be understood by DOJ's document. Surely it would not have triggered Bank Negara Malaysia (BNM). The money was raised off-shore and bulk of it did not return back to Malaysia.

By right, Securities Commission should be involved since a Malaysian government company based in Kuala Lumpur was the issuer of the bond. Usually, SC would be vetting and approving the prospectus before it is launched and marketed to investors.

SC had a role to play to ensure the condition of the bond issue, especially in aspect of the purpose, utilisation of fund, procedures, etc. are met.


If SC had done their job, the questionable aspect of the money flow as per the diagram by The Edge below would not have occurred: 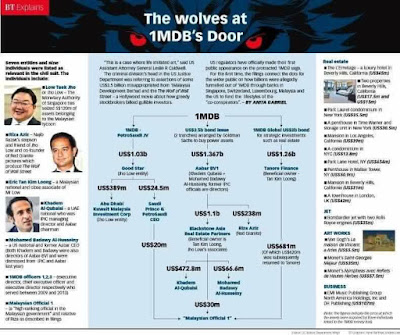 There could have been loopholes somewhere and SC should have spotted and stopped it.

This is serious because PKFZ financial scandal was also about bond and within the path of SC. It raises the issue of SC either failed to play their role or is incompetent.

Over the last few days, it is heard SC charged someone and court made a decision in which the charges by SC's DPP and decision by the court was faulty.

It embarassingly misquoted the section of the act with the alleged offense. And the judge found the dude guilty of both?

Soon to be news.

All these happened not only during the Chairpersonship of Tan Sri Zarinah Anwar but also Ranjit Ajil Singh.

When Zarinah left to be replaced by Ranjit in 2012, there was much hope such nonsence by SC like allegedly special approval for family member would stop.

However, it did not happen. The role of monitoring and control is still lacking in SC.

For that matter, the PAC's competency is up in question too. Why was SC not called in for proceeding on 1MDB?

To be fair, the new Chairman Dato Hasan Ariffin should not be blamed. He is not expected to know and have familiarity with bonds. Why did Dato Nurjazlan or Tony Pua not call in or made an issue to call SC in?

Nurjazlan did not hold back as PAC Chairman so it rules out he is covering up. Tony Pua used to be shareholder in a public company and being an Oxford "I'm-to-clever"  wunderboy, he should be familiar.

Both too cannot be blame for incompetence. What happened to civil servants that are supposed to advise PAC?

However, we have to raise the issue of competency of PAC members, particularly the opposition members. They made an issue on the OSA status of Auditor General Report. What is the big deal?

Now that Tan Sri Ambrin Buang has spoken and admitted he requested for OSA because earlier preliminary report was leaked for political expediency to campaign for PM's removal, will they clarify the truth to the public?

Dato Puad Zarkashi was ridiculed by the public for highlighting this fact.

The public seemed ignorant and gullible to.opposition instigation. Auditors can only raise issue of probable irregularity but not confirm it. Only investigation by relevent authorities and forensic audit can confirm wrongdoing!

Many may not realised that issues raised by Auditor General in their annual report are mostly cases of auditors unable or refuse to understand explanations.

One of the problem with the 1MDB issue have been too much politics. Tun Mahathir and DAP is too driven by politics that the issue lost it's focus.

He is so possessed that he can't put his facts right. Mahathir's statement is not accepted by the court in Najib's lawsuit against Tun Ling Liong Sik.

And, he failed to get Najib cross examined in his lawsuit.

If the allegation by DOJ is a sure thing, why the need for diversions by Sarawak Report spinning East Coast Rail will cost RM60 billion? It's not even discussed in cabinet yet.

Then Rafizi's new allegation on Tabung Haji. Not worth discussing. Anything coming from him are nonsense. 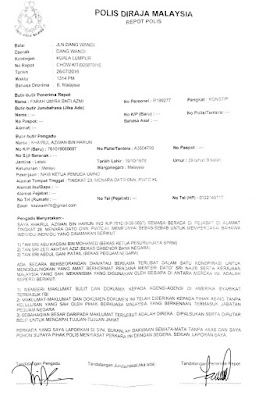 He claimed they conspired to topple PM.

Why is he repeating the same conspiracy theory as before?

It is not a line that the public will buy into after the DOJ filing is publicly available [get it here]. If there is any truth, it takes time to to do so. Not when the iron is still hot.

Did he ever thought that the cooperation between MACC and FBI in the investigation may have been made known to PM himself?

PM, police and 1MDB expressed willingness to assist investigation. He insist the affected persons to defend themselves in the US court. In addition he wants the reputation of the government cleared and no public fund misused.

Some maybe cynical of his statements but the fact is it is on record.

Gani Patail has responded. He said to Bernama, "These frivolous allegations are publicity seeking stunts with no substance.

"Attempts at character assassination would only trigger a backlash and undermine the goverment in the long run."

Opposition have offered a coalition of 10.lawyers for the trio.

Does Azwan want the backlash to happen? So happen Dato Khairuddin Abu Hasan also made a police report. 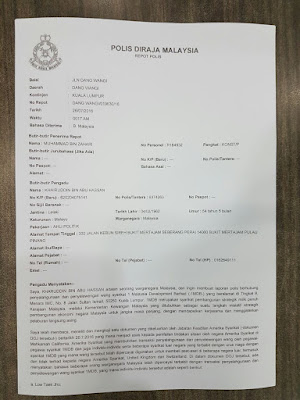 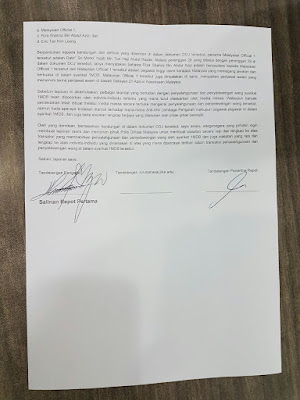 As for Azwanbro, is it by coincident or planned?

Better it not be a stunt to save himself. It is rumoured he is under investigation in Perak. The IP stacked on the floor could be as high as the dinner table. Azwan's act has put Khairy in a fix.

Does Khairy knows what is Azwanbro up to? These Perakians can be so unpredictable and as unreliable and incapable as one Perak blogger.

He better not collaborate with Azwan for there is talk of certain members of the cabinet is starting a coup against PM and he could be accused.

So far it is only non-commital statement of Ministers statement on latest DOJ. Even Dato Hishamuddin was non-committal when Tan Sri Muhyiddin was critical then.

Tan Sri Shahrir Samad denied of such happening. The hipster former Minister is quite on the ground.

So it could be Azwan trying to match Khairy's smart statement:


KUALA LUMPUR: Any criminal investigation into the findings of the civil suits filed by the US Department of Justice (DOJ) should be led by Malaysian authorities, said Umno Youth chief Khairy Jamaluddin.

"It would be preferable that should there be any instance of criminal fraud, those investigating be led by Malaysian enforcement agencies," said Khairy, who is Youth and Sports Minister.

More in The Star here.

Can Mukhriz say something or he is comfortable being perpetually up-staged by Khairy?

Khairy could be responding to an earlier IGP statement to refrain from responsibility to investigate civil suits.

IGP has responded to explain he does not want the suspect to run away. No investigation commenced on Azwan's report.

The problem with Azwan's report is he does not know what is happening off the public radar. Maybe he is trying to by-pass the OSA.

At least, add one more conspirator for the act of incompetence ... the SC.

Raja Petra has a different twist to the events that unfolded:

Ranjit been sleeping far too long. This isnt about politics, but SC shud have done some real work. Thanks for finally see whats actually going on but since shit got to the fans nowadays no one want to be a fan anymore.

A supposely sovereign fund to a run off? Good lord. Why Jo didnt say a word before? Balls gone?

And as for azwanbro, heard that the higher ups didnt keen at all. His arse on fire?

In the West, the Whites were dominance in politics, social and economy. Malays didn't have that. They have been scundered by the people who swear to god that they could deliver plenty of doh on silver platter but it did not happen as expected. They might also losing another asset: the political dominance. Pity them.

Again, not addressing the issue at hand. The fact is, all the supposed allegations and innuendoes have been proven correct. Does it even matter what the thief says? Its proven that 681 million was not a donation. Money trail in doj's docs shows otherwise. The only reason our beloved pm isnt suing or getting hot is because they didnt use his given name but instead opted for M.ofishel 1. Maybe someone told him, if he sued, it would be admission.

They will name him. You know why they havent though?

But all this will not happen if the number 1 person in Malaysia, the MO1 did not flex his muscle to get this 1MDB saga top go on and on and on...
As the PM, Finance Minister, Chairman of Investment Committee of 1MDB where every decision need his approval, and the person who is instrumental of 1MDB, Najib is the master of incompetence.

Has court proceeding commenced and a judge made a decision?

Has any lawyers said in court I rest my case?

Guess you know there are none. Maybe you are not familiar with process of law.

Maybe you are right. But that is based solely on news report and your own conclusion.

Maybe he trusted people and they failed him. It happened before with Omar Ong. All aristo including Mukhriz fall into that trap.

Guess we made a mistake to ask around ourself and not totally trust newspaper and newsman.

We over heard of a meeting between a former 1mdb official and someone in damansara.

Seemed to have a third person.

Our plan and His Plan

8:42 SAHIH INTERNATIONAL[Remember] when you were on the near side of the valley, and they were on the farther side, and the caravan was lower [in position] than you. If you had made an appointment [to meet], you would have missed the appointment. But [it was] so that Allah might accomplish a matter already destined - that those who perished [through disbelief] would perish upon evidence and those who lived [in faith] would live upon evidence; and indeed, Allah is Hearing and Knowing.

One simple yet mandatory question.Can the 1MDB case pass the red line?What the red line is?BRD.Beyond Reasonable Doubt.Can the ANC and its corroborated agents like Sarawak Reports (Credibility at questions with doctored pen drive data from Justo Thailand High Court Affidavits),WSJ tainted editorials and half past eleven the wrath monger retired old man tun pass the red line.A simple lost credibilty of Sarawak Report has already collapsed the case prematurely.Its a premature ejaculation than spoilt the opera and a terribly bad screenplay that even DoJ and its AG was taken for a joy ride by none other than the puppetmaster.The most tainted old man tun.Even buried six feet under,his wrath will illuminate thereafter but understandable.

8:30 And [remember, O Muhammad], when those who disbelieved plotted against you to restrain you or kill you or evict you [from Makkah]. But they plan, and Allah plans. And Allah is the best of planners.