Burden of proof is on Mahathir 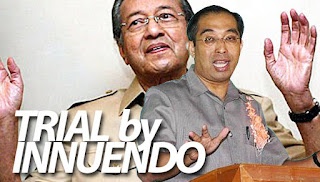 There is a basic legal principle that the accused is innocent until proven guilty. It means it is up to the accuser to prove the guilt of the accused. In fancy legal jargon, it is called burden of proof.

In court, the accuser, usually the prosecutor, have to substantiate their allegations with proof. They have to establish a prima facie for the court to direct the accused to defend him or herself. The accused only need to raise reasonable doubt to be acquitted and off free. Failing to do so will lead to a guilty sentence.

This principle should be applied in a court of public opinion. The allegation on Dato Najib in relation to 1MDB need to be substantiated with proof by the accuser, inclusive of Tun Dr Mahathir. Thus far, he has not live up to the burden of proof.

Instead Tun M, paka-Tun (no more pro-Tun because they are now opposition), opposition and alliance of foreign media are shifting the onus of proof on the accused Najib or third parties like Attorney General, Police, MACC, BNM, and foreign investigators.

When an explanation given, they refused to accept and loudly accused interference in the investigation to justify their misguided insistent that any result of investigation must meet their expected outcome. Yet no proof of such wrongdoings offered.

They can suspect all the conspiracy theories but nothing wrong was done and not in accordance with set procedures.

It gets more ridiculous. They accused and insisted AG or MACC, or PDRM or BNM as being wrong or in-cohoot to acquit Najib. They made such claim merely based on their suspicion from assumptions derived from their limited logic and common sense.

Without proofs, any assumption remain an assumption. Logic and common sense is mere speculation.


Since their basis of allegations are rely on WSJ and SR sources as their Quranic (or Biblical or Vedic) truth, why won't they insist on Tun M to reproduce those allegations into a legal document or official statement? No more asking and recycling questions but be specifics with the what, when, whom, where, why and how of their allegations.

As the practise in court, the evidence they wish to offer must be without doubt. Otherwise, like the accused in court, Dato Najib must be allowed to get away scot free.

Have any evidence or story by the detractors of Najib able to offer anything without reasonable doubt?

So comes the argument, which is shallow and dunce, to insist that Najib should sue anyone that wrongly accused him. If justice in a court of public opinion have to be dispensed in a court of law, then stick to the principle of law in making accusations.

Shallow logic ... the accused have to spend money to get his innocence? Najib have better things to do. RPK latest posting raised the following explanation:


... according to UK’s Defamation Act 2013, Najib cannot sue Clare in the UK. This is because he does not have any connection to the UK. This has been explained many times before, but somehow these people are either deaf or are pretending they do not know this.

So we have these opposition people repeating again and again: why does Najib not sue Clare if he is innocent and if Sarawak Report is lying? Are these opposition people so dumb that they cannot understand that Najib cannot use the UK courts to sue Clare? How many times need we repeat that? Even 100 times and they still do not seem to understand it.

Their same argument could be turned around against them:


... why does Tun Dr Mahathir Mohamad, Muhyiddin Yassin, Mukhriz Mahathir, Shafie Apdal, and so many more from the Anti-Najib Campaign (ANC) also not sue?

I mean they cabar Najib and ask him to sue and say that if he does not sue then that means he is guilty of all the allegations made against him. However, all those others do not sue as well.

Mahathir has been accused of setting aside a budget of RM2 billion in the campaign to oust Najib and that RM600 million of this is being used in the media war and to bribe Mat Salleh journalists and bloggers in the UK, US, Australia and so on. If that is not true why did he not sue?

Mahathir has been accused of stealing RM100-200 billion of Umno’s money, which he parked under his proxies, cronies and family members (and which he refuses to return to Umno). If that is not true why did he not sue?

Mahathir has been accused of directing Petronas to bail out his son’s shipping company to the tune of RM2 billion when the company was worth less than half that value. If that is not true why did he not sue?

Mahathir has been accused of manipulating MAS to cover the RM30 billion Forex losses that Bank Negara suffered by playing the money market (and which literally bankrupted the airline company). If that is not true why did he not sue?

Mahathir has been accused of covering up the crimes committed by Ling Liong Sik and Eric Chia involving billions of taxpayers’ money. There is even an allegation that not only did Mahathir cover up the crimes but that they acted at the behest of the old man. If that is not true why did he not sue?

The list of allegations against Mahathir runs into pages but Mahathir did not file a single suit against all those people who alleged he had committed these crimes.

Muhyiddin has been accused of massive corruption when he was the Menteri Besar of Johor and more recently he has been accused of having an affair with Nika Gee, someone else’s wife. Muhyiddin merely denied it, with a very feeble denial on top of that, but he did not sue the person making that allegation, Nika Gee’s husband.

Mukhriz has been accused of pressuring his father to make him the Deputy Prime Minister by removing Najib and replacing him with a proxy Prime Minister so that by 2020 or so he can take over as Prime Minister. If that is not true why did he not sue?

Mahathir and all those in the ANC have been accused of fabricating stories regarding 1MDB with the purpose of trying to oust Najib so that he can be replaced with a proxy Prime Minister and with Mukhriz as his Deputy Prime Minister — who will later take over as Prime Minister. If that is not true why did they not sue?


In comparison to their long list of allegation, RPK observed:


... there is only one allegation against Najib, and this is regarding 1MDB. Najib has denied those allegations but they have not come forward with any evidence to prove that Najib lied.


Since they are making the allegation then they need to prove it. Instead they are asking Najib to prove his innocence, which is not his job.

For that one allegation against Najib regarding 1MBD there are dozens of allegations against all those who oppose Najib. But none of them have come forward to sue to prove their innocence. And yet they insist that Najib sue to prove his innocence.

There must be something wrong with these people.

Quite sure they can't argue intelligently with civility and could only able to vet out anger, name calling, and dishing out insults.

What proof is there left when even the Auditor General's report was OSAed.

This is one serious and valid question.

Since 14/4/2016, its coming to 100 days? since it was told that investigation was launched to the Laporan Ketua Audit Negara (Sinar, 2016) and yet no one was apprehended. What is the progress on that?

Suppressions of information have cause the concerned people to look at the so called dubious sources. But you cant look at this as an opportunity to wipe out all the allegations once and for all. It is a shame that a foreign press broke those news and in one way, dictates the thinking of our people. Call it how u like but this avenue should have been one way to forever bury the so called lies.

As i told u, we were once proud umno people. Even more proud as a malaysian. But not anymore.

The onus to proof is on the accused becos he is the govt. The infomation is with him. Reveal the info, people will beiieve him. Cakap kosong tak ada guna. Sarawak Report gavev a series of document to proof if. Why ban the site, if not for cover up.

Another thing. When asked to produce the proves they will divert the question by asking where's your conscience by supporting the corrupt never mind that its not yet proven that the accused is corrupt. Spinner?

Many comments with some level of argument but this pakatun cannot refrain themselves from dishing insults and venting anger. What is the point of commenting and writing at length when you still put keywords that will bar from release?

Either they have no manners or inadequate to argue intelligently. And imagine these emotionally unstable people thinks they have the power of reasoning and logic to suspect and judge Najib as guilty.

yeay...now you are the moral police.

anger is good, if you don't over do it. That is the reason Allah give that emotional feeling to human kind. Just as why Allah gives the feeling of love, sad, happy etc. and to protect those emotional feelings, Allah ask us to be patience and seek guidance from the Quran and Muhammad the messenger.

back to your argument. do Malaysian have to right to be angry and at the same time be judgemental to Najib.

Of course we can. if a citizen of a nation can't be angry with the robbing of the nation's money and at the same time be burden with high cost of living arising from extra taxes and doldrum economy, i think that nation is sooner or later going to the dog.

2 simple questions for you to answer:

why Najib let the AG's audit report on 1MDB be OSAed? this is after last year he ask the nation to be patience and wait for the AG's report.

why are you omitting the fact that BNM had already issued letters to PAC and also AG to clarify that investigation by 2 foreign authorities reveals that Good Star did not belong to Petro Saudi but actually belongs to Jho Low?

they are so many questions that are not answered and will never be answered or was lied upon frequently, but lets start by those 2 questions I mentioned above. please don't get arouse just because your relative can't answer your question and think because of that, your argument are good coz there are many people that can easily argue with you based on facts and reports (PAC/AG/ foreign authorities investigation that are already in the news or IPIC media statements). No need to refer to SR or WSJ.

Just a quick question for you:

why the need to OSA the AG report?

Whether the others questioning the government are Paka-Tuns or Pakatoons...if doesnt matter for nobe of them are answerable to 1MDB. The Government is. And being the voice of the government...go ahead explain the need to hide the AG's report.

No stone will be left unturned.

Ya lor.
Proof the billions money in the account is legal or illegal.