Apandi moved in for the kill 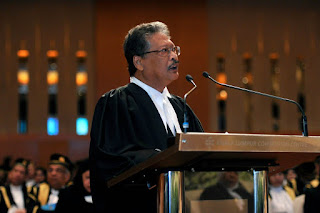 This is not about Lim Guan Eng's case.

He and Kit Siang can do all the roadshow and propaganda but his fate is sealed when Federal Court Judge turned Attorney General, Tan Sri Apandi that took up the case. As one lawyer friend said, no AG would take up a case unless it is a sure thing. More so for a Federal Court judge.

Joceline Tan is right to say DAP is in a critical situation. Guan Eng attempt to rile the public will fail as the facts are rolled out in court. So this posting is about Bar Council or The Bar.

At an AGM. they passed a motion to  call for his resignation. It was to DAP lawyer, RSN Rayer a contravention of the Legal Profession Act 1976 (LPA). It is also seditious and challenging Agong's prerogative to appoint the AG.

A legal association rejected the Bar's interference into the institutional affairs of the AG.

Before that in March, the Bar filed for a judicial review against AG's power to decide not to prosecute Dato Najib.

That is obviously a political stunt that will get thrown out by any court. It is the constitutional power of AG to make that call.

In April, the Bar made a new fuzz over the proposed amendment of the LPA and sensationalised it by claiming to oppose appointment of AG as Bar Chairman.

Apandi Ali have been quiet and contained his disgust but he is no pushover.

The Bar has gone overboard. Thus they can only to be blame for Government to protect the interest of members and the profession by preserving the integrity of Bar Council.

Apandi hinted that he is not taking all these laying down. He asked media to sue politicians that lied but knowingly it was intended for politician-lawyers.

And told off Tun Dr Mahathir not to play psychological game on him.

Indeed, he is only interested in playing it legal.

In the midst of much attention on the Lim Guan Eng case, Apandi, which was described by Bigdog as akin to Prosecutor Robert Jackson of the Nuremberg trial of 1946, dropped the long awaited bomb on The Bar.

He wrote in Berita Harian to explain and express his support for the new amendment to the LPA.

AG will not be made Bar Chairman but two representative from the Government will be appointed into Bar Council committee and state committees.

It serves to meet section 42 (1)(l) of LPA to develop good social and working relationship amongst Bar members and with others involved with law administration.

Naturally, the incumbent members of The Bar will oppose the amendment.

Bar President, Steven Thiru complained to Singapore's Straits Times with claim that Najib administration is "threatening the Malaysian Bar's independence and an attempt to muzzle criticisms".

They are feeling the heat also from a new requirement to raise the meeting quorum from 500 to 25% of members, which is equivalent to 4,000.

Say what he likes but there is no question about curbing the Bar Council. It is only serve for better governance, making it more representative of the members and in the right direction to lessen politicisation of The Bar for the few.

As a professional body, the Bar should be solely focus on such a role.

If some members want to be politicians or have strong leaning in their role towards politics, they should join and be active members of political parties.

The members are more interested to cari makan as lawyers. They prefer to see that the Bar serve such need of it's members and play the role to uplift the professionalism of members.

Maybe it is of no interest to the opposition. And maybe their attention is geared too much on Lim Guan Eng.

If it is so, then it is a smart move by Apandi to sneek in when everyone is looking the other way. He has moved in for the kill on these hooligans and anarchist in suits and dark ties.

It only serve these law breakers pretending to be law practitioner right. Hope police is serious to investigate them for sedition for convening the AGM.

The Bar have been too much and it has reached intolerable level of subversively being in-cohoot with foreign government to steer the nation away from nation building agenda.

If it had been #No2BC in the past, hopefully we could put up a thumb's up for them in the near future. It has been a long battle.

AG should not stop there. It was reported in the mainstream media that AG has asked that the content of the court proceeding should not be openly discussed in public.

In other words, latest actions by Guan Eng is subjudice and actions could be taken against him. A repeat of law defiant behaviours during Anwar's second sodomy trial should not recur.

For that matter, statements by Mat Sabu and Dato Mahfudz Omar are seditous, in contempt of the court, and defamatory.

There should be no compromise. The law is there to be abide to. Those ignoring and intentionally breaking it should be dealt with accordingly.

I am curious, brudder.

In the reams of reports about 1MDB, there's no one as yet who has been found culpable, been formally accused and charged in court.

How can this be?

In Singapore, "supplementary actors", like an ex-BSI Singapore bankers has been charged with multiple offences, including money laundering.

These are figments of imagination?

You said multiple offenses. What are the specifics to implicate directly Najib or 1MDB?

Arbitration means settling dispute. Will that mean IPIC and Aabar side also did not fulfill their side of the agreements? Are you so sure and with evidenciary backing that it was solely 1MDB's fault? We believe you are not so sure and purely speculating to make one and one to be two. A binary number could be 10. :)

thegreatteadrinkerdownsouth said...
This comment has been removed by a blog administrator.
9:59 PM

You obviously were conned by foreign media common con to mention "linked to". It made you think it is 1MDB. Some dog that pissed by 1MDB construction site could be linked to 1MDB.

If you had read and understood it plus the media source is reputable and reliable, give details and specifics on the charges and allegations including whatever DIRECT and FORMAL LINK it has with 1MDB.

Devil is in the detail and not what you understand which obviously you do not understand much.

And hello ... Where did you get the notion 1MDB formally refused to proceed with the Arbitration? Mahathir whispered to you ka?

Arbitration has to be done using lawyers, expensive or not, la ... pandai. It is the practise to get the best representation. IPIC also got lawyers and expensive one also.

IPIC can claim anything but the facts in court that matters. Guan Eng also denied he committed corruption on the streets. Botak Chin claim innocense till the noose is around his head. But does it matter?

Use your pandai head and ask around as to how things operate in an absolute monarchy???

Stick to Apandai and Bar Council. Don't deviate from subject!

I guess u must be a very experienced and knowledgeable person in this 1MDB issue!U seem to know anything and everything abt 1MDB that you could easily defend and deflect statements made by the commentators! Not to mention the fact that you're also a racist imbecile.

thegreatteadrinkerdownsouth said...
This comment has been removed by a blog administrator.
3:23 PM

Great comeback, Voice. These macai supporters, when they have nothing to more to say, they start to deviate, obfuscate and play the race/religion card.

Drinker - looks like your argument is only re-reporting of news report. Nothing affirmative. Still personal opinion and probably guesswork.

If a voice is too clever by half, I assume you are clever. Just a day before hari raya 1mdb reminded that the dateline to response is 11th july. Earlier stmt said they will honour the condition in agreement to resolve dispute thru arbitration.

Where did you the info they refuse to proceed with arbitration?

thegreatteadrinkerdownsouth said...
This comment has been removed by a blog administrator.
5:04 PM

We are not in a court where you are a lawyer asking a witness with that kind of simplistic arm twisting question on bith way. Only idiot witness fall for that cheap stunt. Clever witnesses would ask the question to be quoted until it is clear what it is and not leading to any twisting. If they are lucky, the lawyer would not ask the intended question in any other way at all and end up looking dumb.

You are arguing your case but asking others to read and research on our own. Only means you do not have the facts. With the cheap stunt for yes or no answer, it puts your understanding of the issue questionable.

In the first place, wHy would 1mdb even consider of not proceeding with arbitration when it is stated in the agreements between them that disputes are settled thru arbitration? Again, get your facts and understand right before you try to give an opinion of your own. So what relevence is it whether 1mdb is confident or not.

Your issues have no relevace to new LPA and Bar Council. Take your quarrelsome and cabar mencabar comments elsewhere please.