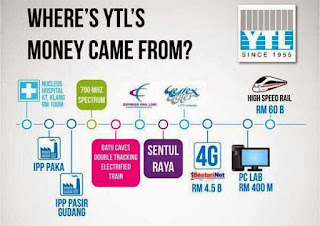 Thanks to crony capitalism, YTL grew to be a giant from a series of direct nego contracts.

It all started with the fast track  IPP contract in Pasir Gudang and Paka, Terengganu. Though there was issue with the ranting by the late Tan Sri Ani Arope, it cannot be disputed that YTL made easy of money of more than RM1.5 billion revenue per year.

The 21 year old PPA was signed on March 21st, 1994. It has expired in September 2015. [Read MMO here]. In early October last year, YTL Power won a bid for the extension on the existing power plants to cover for expected power shortage due to delayed new IPP projects [read Sun here].

Howewer, the land lease too needs renewal from TNB. They decided enough is enough with this free ride nonsense that came at the expense of the rakyat.

This have been bottled up inside for too long. Since the old man cannot stop playing his destructive politics, it has to be said in the open.

It was so typical of Mahathir era privatisation deal for his immediate cronies to make easy money. This is something Syed Saddiq will never know and understand. He was still in his nappies.

It is strongly suspected that he had interest via shares through a proxy company. It made the deal easy to put together. All it need was a cabinet that dare not stood up against the boss. Everything else was senang cerita.

Project paper was "stolen" by bribing a former TNB engineer. Technical expertise and management from and out-sourced to ABB, respectively. Energy source subsidised by Petronas. Funding forced on local banks

TNB directed into a PPA at a more pricier per unit cost and based on a take-or-pay mechanism. Their land was "given" to YTL by TNB at a cheap land lease. [Read these blogs here and here].

Any Ahmad, Ah Chong and Masing could do.

The Ministry of Energy, Green Technology and Water (KeTTHA) confirmed the much talked about failure to have YTL sign the PPA with TNB. [read Sun here].

TNB was directed to sign the land lease by Energy Commission (EC) but they are not going to. In fact, they are taking the 8 months dispute to court by seeking a judicial review.

What is the dispute with YTL unit which TNB seeks to settle?

Industry players said that issues in relation to the land where YTL Power’s plants in Paka and Pasir Gudang are located have been a stumbling block to the proposed agreement to extend the PPA governing the plants.

“It is a longstanding issue brewing for several months now. The move to seek a judicial review on an order by the Energy Commission (EC) and the minister directing TNB to remove certain conditions that it (TNB) wanted fulfilled prior to the signing of the new PPA agreement with YTL Power will resolve the issue once and for all,” said an industry player.

According to previous reports, YTL Power, Malaysia’s first independent power producer (IPP) to sign a PPA in 1993, had built its power plant on land that was leased by TNB.

It is said that TNB wants back the portion of the land not utilised by YTL Power before signing the new PPA to extend the contract to supply power to the national grid.

TNB had stated then that the agreement between the national electricity supplier and YTL Power to lease the latter’s land in Paka in Terengganu and Pasir Gudang in Johor to build its power stations was also affected by the end of the PPA.

Also in October last year, the Government announced that YTL Power had been given an extension of two years and 10 months from March 2016 to December 2018, with a capacity of 585MW.

However, the PPA governing the extension has not been signed yet.

Although the EC had selected YTL Power for a short-term power supply extension last year, the power player has yet to sign the contract with TNB due to the conditions set by the utility giant in the new PPA.

Energy, Green Technology and Water Minister Datuk Seri Dr Maximus Ongkili said the Government had approved the extension, but that YTL Power “just needed to sort out the land issues with TNB”.It was when the EC issued a directive asking TNB to remove these conditions that TNB decided to file the judicial review.

According to officials familiar with the power supply situation then, YTL Power was the first IPP that was built when banks were not prepared to fund such infrastructure. Hence, the land where YTL Power built the power plants were leased from TNB to mitigate the risk factor to raise financing.

The YTL Power plants were built with funds raised in ringgit, which was not common then as financial institutions were not familiar with financing power plants.

Subsequent power plants were built on land that were owned by the IPPs themselves as the risk factor decreased.

“Hence, that is why YTL Power’s power plants are on leased land while the rest are owned by the IPPs themselves,” said an official.

The ministry, in a statement yesterday, clarified the situation on the short-term agreements.

It said the Government, via the EC, had conducted a competitive bidding exercise last year to procure additional power supply on a short-term basis by extending the PPA of the first-generation IPPs.

It added that PD Power and Kuala Langat Power have signed the extension contracts, while YTL Power is yet to ink the deal due to the conditions precedent set by TNB on its agreement.

“TNB is also challenging the directive issued by the EC to extend the PPA,” it said in the statement.

On Monday, TNB announced to the stock exchange that it had applied for leave to begin judicial review proceedings against the EC and the Energy, Green Technology and Water Minister.

TNB said that it was seeking for a judicial review on a direction issued by the EC to TNB, which compelled TNB, among others, “to remove the incorporation of conditions precedent required by TNB” in the proposed new PPA with YTL Power.

The direction, dated April 7, was made following the minister’s direction to the EC on April 1.

Affin Hwang Capital Research, in a note yesterday, said that YTL Power would be negatively impacted if TNB was successful in its judicial review proceedings.

As the PPA for the power station in Paka, Terengganu, has yet to be signed, YTL Power does not derive any earnings contribution from the Paka extension yet, it said.

“A possible scenario is that YTL Power would have to make payments for the land lease, while a worst-case scenario would possibly see YTL Power not successfully securing the PPA extension,” the research housed said.

The research house estimates that the extension to the Paka plant currently contributes about 12% to YTL Power’s target price of RM1.60 and about 10% to its financial year 2017 (FY17)-18E earnings per share.

It has maintained a “hold” on YTL Power, with an unchanged 12-month target price of RM1.60. 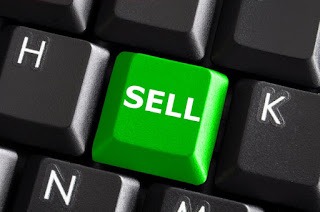 To recall, YTL had to withdraw from participating in a "negotiated" IPP in Johor involving the Johor palace in 2014. Thanks to Bigdog here for torpedoing YTL Power-SIPP Energy for the 4A power plant in Pasir Gudang.

Serve him right for pretending to be holy in his new image as reborn Christian and call for end of crony capitalism. TNB should fight to stop the biggest culprit of crony capitalism from continuing to make easy money from endless string of rent seeking deals.

Since analyst are unsure and recommending a cautious hold on YTL Power shares, suggest a sell when it opens Monday!

Since this is talking about Mahathir's crony, Najib should seriously consider to re-examine the MOU for YTL's High Speed Rail from Kuala Lumpur to Singapore to ensure there is no more "free ride" but make sure it is payback time.

No special reason for any preferential treatment for the invisible hands that bankrolled the current attempt to topple the government. The IPP cronies met Tun Dr Mahathir in Argentine prior to GE13 and from thereon, planned to "hit" 1MDB despite no conclusive allegations.

Don't try to dispute because there were known witnesses who is not happy with that conspiracy.

In case, anyone doing cheap psywar by talking badly of 1MDB during the festival visitings, make sure it is not recycling allegations from politicians, questionable media source, selfie fanatics and wannabees.

Be sure they have the specifics what, when, why and how. Not just their common folk logic and guesswork.

If they have it right, you have every right to agree. Otherwise, tell em not talk to cock over something they know nuts and it is only on their unsubstantiated perception. Make sure they have some resemblance of knowledge in financial market, off shore banking and ...

Sorry not giving away a trump card. Already they are stonewalled at every step.

Yeah right. When people bring u proofs, you say you want to see a video recording of the act being done by the accused. You're with the wrong horse. Morally bankrupt. You reap what you sow you mong

I guess this is what hapens when a kerala mamak runs the country for 22 years in classic kerala fashion.
Mahafiraun and his family has done enough damage to this country. Prime Ministers that follow this kerala bullshit called mahathir will have to spend decades trying to clean up his shit!

Woi, kerala shit! You don't own this country!

TNB and YTL are profit making companies. Tun Dr. Mahathir knew the government of Malaysia was not capable to invest in power business with all the government money. So private sector had to invest in power business. Private sectors have been investing building hospitals and colleges and even high schools. Can you imagine what would happen to the government with no private hospitals and there is no private colleges and schools?
But for a private company to invest in power business is that the risk is too high so YTL took the necessary steps to reduce the risks. The point is the rakyat have to pay ,ore because the government cannot afford to subsidize the rakyat. In some parts of Kampong Cham in KampongChea the electricity is sold at RM2.50 per unit to the poor people. Supplied by a private company.
To be fair to the rakyat, Electricity business should be more competitive. More companies should compete against TNB at all levels.

Did YTL took any risk to deserve the higher price? All was given ...