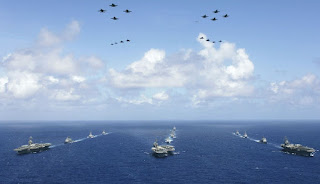 While everyone was victoriously celebrating the end of Ramadhan, Foreign Minister Dato Anifah Aman must be the most nervous person in the country.

He seemed to be enjoying himself engaging in small talks and diplomatically entertaining the visitors at the cabinet open house on the first day of Raya and few days later, back in his kawasan in Kimanis, but his mind was elsewhere.

Anifah is nervous of the outcome of the tribunal convened by the International Permanent Court of Arbitration (PCA) in the Hague as initiated by the Philippines against China on Jan 22, 2013. It followed the tense standoff between the naval vessels of the two countries at Scarborough shoal in 2012.

Vietnam has dispute with China over the Paracel island.

The ruling favoured the Philippines but either way, the outcome of PCA will not offer an immediate solution to the territorial dispute on the South China Sea claimed by China, Philippines, Vietnam and Brunei. It could heightened tension within the region. 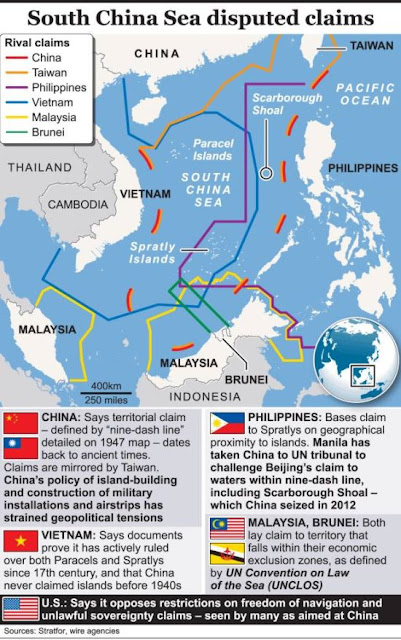 China made known earlier that it will not abide by the ruling of the PCA and will not negotiate with Philippines based on the arbitration ruling. [Read Chinanews.com here].

They boycotted the hearing claiming it has no jurisdiction on the matter. In an arbitration proceeding, China is entitled to choose a representative in the tribunal but they refused. They also disputed the choice of a Japanese judge to preside the proceeding and cited bias as reason.

China have been holding navy games in the South China Sea area preceding the ruling. They claim it is part of their annual plan.

On the diplomatic front, China offer negotiation with Philippines with areas of cooperation in joint development and scientific research should it chose to ignore the ruling. Philippines responded with a willingness to share even if it wins the legal challenge.

AFP reported that China is enraged with Philippines arbitration proceeding and US military presence in the disputed area.

US destroyers have sailed close to Mischief reef, where China have been putting up military installation. The American aircraft carrier, USS Ronald Reagan have been stationed at the South China Sea since early July. [Read The Hindu here]

Time.com reported two US aircraft carriers are streaming to the Pacific. Admiral John Richardson, the U.S. chief of naval operations said, "We don’t get to do two-carrier operations very often."

China propaganda machine have been on overdrive and whipping up nationalist sentiment.  [Read The Star here]

China’s ambassador to the UK, Liu Xiaoming was quoted by Reuters to have said, “We do not know, we don’t care, in fact, when this arbitration decision will be made, because no matter what kind of decision this tribunal is going to make, we think it is totally wrong.

"It has no impact on China, on China’s sovereignty over these reefs, over the islands. And it will set a serious, wrong and bad example. We will not fight this case in court, but we will certainly fight for our sovereignty.”

Liu also commented on countries in alliance with the US in this dispute, "They probably believe that they have America (behind them) and they can get a better deal with China. So I’m very suspicious of America’s motives."

"China gains reputational power by showing the US that it can’t dictate Chinese actions."

Reuters reported Beijing’s ambassador to the United States, Cui Tiankai told an international conference that the international tribunal’s ruling will "intensify conflict and even confrontation" and blamed the rise in tension in the region on the US' "pivot” toward Asia in the past few years. 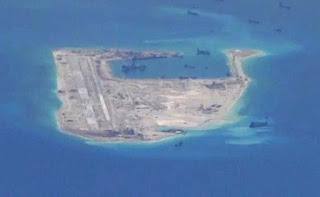 The tribunal ruling may compel Beijing to curb its dredging in the South China Sea and stop the creation of new island to be claimed as Chinese territory.

Gregory Poling of the Center for Strategic and International Studies told Time.com that "China is more likely to increase its island-building, and perhaps impose a blockade on Philippine sailors" as happened before in 2014.

The US may invoke it's 1951 defense pact with Philippines and China declare an air-defense identification zone as happened in 2013.

Mark J. Valencia commentary in The Japan Times viewed "U.S. “rebalancing” to Asia has come face to face with China’s desire to control its near-shore waters." The ruling is a prelude to the inevitable war between US and China.

Doomsayer are predicting that it could escalate into World War 3. [Read couple of American warmongers here and here].

Since the China navy exercise, Japan has activated it's radar system in East Asia.

Moscow have plan to create a naval base in one of the western Pacific island. Russia are vocal alliance with China and planned to conduct war games with China and Brunei.

The clash of superpowers off the shores of Sabah and Sarawak was something Malaysia chose to avoid.

Malaysia took a diplomatic option following the presence of China Navy 60 miles off the coast at Bintulu in 2014. China was offered to jointly develop on Malaysia's claimed territory and was recently commended by China in an international meeting. That way it is China's indirect acknowledgement of sovereignty.

Philippines chose the legal approach to dispute China's claim of historic right along the "nine-dash line" claim. They argued and the tribunal ruled in their favour yesterday that it does not conform to the United Nations Convention on the Law of the Sea (UNCLOS), an international treaty signed and ratified by both China and the Philippines. [Read The Star here]

Julian Ku, law professor at Hofstra University said to Reuters, "If the nine-dash line were declared invalid, then in theory all the other countries would be emboldened." The victory to the Philippines could spur Taiwan, Vietnam, Malaysia and Brunei to file for their  overlapping claims.

"It can signal its displeasure at the ruling by extending that program and militarizing the islands it controls, risking confrontation and even conflict with emboldened Asian neighbors and the United States. Or it can suspend the program and adopt a more conciliatory approach, at the risk of a loss of face domestically." 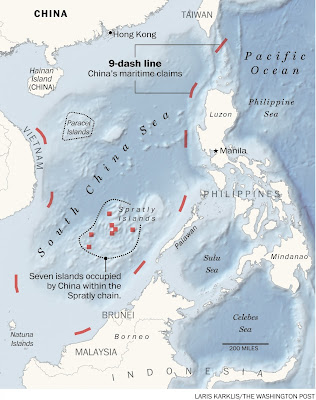 More is at stake for China and the disputing countries.

"Some $5 trillion in commerce, roughly one-third of global trade, flows through the South China Sea every year, while its fisheries account for 12 percent of the global catch, and significant oil and gas reserves are thought to exist under the seafloor."

US is far from the theater of war.

The war will not only be off the shores and Sabah and Sarawak, but within reach of the endlessly at political loggerhead Semenanjong Malaysia. And, Malaysia is in no position to defend itself after opposition through SUARAM have been undermining our lower-than-average defense-to-GDP budget for political expediency.

Should war break out, demands for 20% oil royalty by Sarawak and more autonomy by East Malaysian states will be of no relevance.

Sabahan Anifah maybe getting sleepless nights but more worrying is Malaysians lackadaisical attitude towards security and development on the foreign front.

When Lahad Datu was "attacked" by Shafie Apdal's Suluk relations from Philippines, opposition leaders was on a blame game and believed to have collaborated with the enemy. Malaysiakini was fault finding and putting our security personnel at risk with their expose of security operations.

There was no outcry from the public then.

Certain diplomats at Wisma Putera can be too comfortable to assume everything remains the same and the future is an extension of the past. While, the leadership at MINDEF seemed to be playing diplomat instead of concern for sovereignty and defense of the realm.

One can only hope Malaysians could be awakened to this bigger threat that could negate our sovereign existence and end the prosperity we have enjoyed. Lost and carried away they are by the tales behind the selfish power quest of some mamak.
at 7/13/2016 01:17:00 PM

When Lahad Datu was "attacked" by Shafie Apdal's Suluk relations from Philippines,

An uncalled for remark n below the belt la abitw...despitw his shortcomings..he did resign as compared to the other two tu la..

If you just started following this blog, you miss the following comment:

Shafie was also avenging Musa's support for an RCI on "Projek IC".

Though claiming himself to be a Bajau Laut, Shafie is actually a Suluk. Most of his voters are "Projek IC" citizens of Suluk origin from southern Phillipines. The same people involved in various kidnapping of Malaysians and foreign tourists off the coast of Sabah and Sarawak.

In the midst of the RCI, Shafie was defensive of his fellow Suluk. Taking an excerpt from our December 5th, 2014 posting:

Federal Minister, Dato Shafie Apdal was rather non-commital and taking a politically safe stance. He asked for agencies to be more careful [read MMO here]. It is to consider the feeling of his fellow Bajau Laut which roams the sea from Phillipines to Sabah.

To conclude, the video by PKR conclusively showed Shafie have been collaborating with opposition to depose a BN state leadership. He was not sulking and it is long over due to have him sacked by UMNO!

Read the rest in http://anotherbrickinwall.blogspot.my/2016/06/shafies-sulking-all-act.html

We have been at Shafie's back for years. His game is not over. Till he quits public life, he is game.

Someone who makes a political career by creating supporters through keeping rakyat impoverished and dependent should not be foregiven.

He is still an ongoing concern.

The Chinese are thieves all over the world.
Now they see an empty sea and of course they will try to steal it.
War is inevitable.
They Chinese are too poor and two billions of them are greedy.
The world have to keep them in.