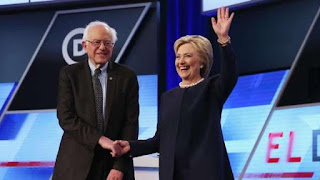 The past three mornings, we have been glued to CNN to follow the pre-election Democratic National Convention in Philadelphia. Thanks to satellite TV and Internet we can today follow LIVE an event we followed on American TV in America 35 years ago.

The Democrat had always appeal to us over the Republican. If we did continue grad school in Boston and work in the States, we could end up taking up US citizenship like some Malaysian friends are doing now and politically be Democrat.

The sceptics usually say it makes no difference as to who is the President because it is the Israeli and big business lobbyist that determine policies. The election does not matter to us.

True, however, this year's election is different. It is historical ...

The election this fall (or autumn as the Brit would call it) could elect the first woman President. After 240 years of independence in 1776, there is that chance for another glass ceiling for woman broken at the highest office in the most powerful nation in the world.

While we regularly kid about woman drivers and their bad habit, soon there will be a Madam President to dictate the policies of the world.

Knell to the driver.

The American could finally relent to allow a woman to hold the highest office in the country. Something the British, German and New Zealand had done. Our south Asian continent neighbours in India, Sri Lanka, Bangla Desh and Pakistan had done so long ago.

Hillary Clinton looks good on paper. Her opponent Donald Trump, is the most politically incorrect, self-centred and disgusting human demagogue. She is leading the polls but still yet to be a runaway winner.

Trump is within striking zone and any of his salesman trick could swing it and win. After days of Trump bashing by the President, Vice President, and practically all that spoke, the latest polls is scary.


Hillary and her democratic party has got to work hard. It is not as easy as a cheque from daddy as to insult Trump. Billionnaire, Bani Yahudi-owned media and big business is backing him. False equivalence technique is regularly and subtly applied.

Read what Tony Schwartz, the guy who co-wrote the book "Art of Deal" has to say. Trump is threatening lawsuit.

Constant demonising of Trump at the DNC maybe the much needed publicity for Trump. A lesson to learn from Malaysian BN's endless attack on Dato Seri Anwar Ibrahim. It did not turned for the better and Pakatan Rakyat received the majority of popular vote. A 5% swing in popular votes could be the end for BN.

The intention to follow the DNC is not to make commentary as we will be regurgitating CNN. But it is to learn, to understand where we slackened and to emulate as to improve our politics to be more mature and rational.

Donald Trump as the candidate to represent the Republican is not representative of the maturity and rationality of America's expansive and complex politics. Thus the choice to follow the DNC closely over RNC.

Trump blew it in Cleveland last week. The question is: Can Hillary make a comeback and shake off Trump's dirty game to "cartoon" the opponent by creating trust issues on her?

We've selected quite a few speeches in the past three days before Hillary's scheduled finale speech tomorrow.

The agenda are different. In certain area, it may not come well with our eastern culture. The openness may something not many Malaysians can stomach. Basically the environment is different. Appreciate that.

Malaysian politicians could learn much from listening to their speeches. The way they deliver their speeches to touch the heart, inspire, and invigorate the audience with the most appealing fact and story.

Their articulation of issues are clever and impressive. It is so unlike us where politicians had to communicate in the simplest manner for the understanding of the common people. For that, it sometime made our politicians look ridiculous.

In America, they communicate to uplift public knowledge and understanding of issues than stoop to common folks cliche.

The creativity they approach a subject before coming to the point to promote Hillary is astonishing. All done with openness and embrace of civil liberty, freedom and diversity. And, it is all about issues.

The much talked about speech for the past 3 days must have been that of First Lady, Michelle Obama on the first day:


She expressed her aspiration as a mother for her children and future generation American intertwined with her praises for Hillary Clinton.

Her words "When they go low, we go high" could be something not only Americans but Malaysians to emulate towards a more mature and rational politics.

Before Michelle, there was Cory Booker:


For those unfamiliar with the young black senator who was eschewing history in which in Malaysia, only Tun Mahathir was capable of delivering, he was introduced by gorgeous actress Eva Longoria:


Some of our own actress forgot the date for Merdeka when asked on TV...

And another female star in the making, Massachusetts Senator Elizabeth Warren:


The sensation for this primaries season must be 75-year old Senator from Vermont, Bernie Sanders. He closed the first day:


Bernie's left leaning democratic socialist ideology to promote the political revolution. He caught the American imagination and got his anti-corporate America agenda heard on the most unlikely platform of a mainstream American political party.

Bernie's supporters have been most vocal and visible throughout the convention. They vociferously demanded he be nominated instead to the extent of claiming conspiracy in the part of top party hierarchy to ensure Hillary's win.

And, we thought only Tengku Adnan, Saifuddin Nasution and Lim Guan Eng do such stuff.

Clinton offered an olive branch to undertake a joint declaration with Bernie. In turn, it was Bernie officially nominating Hillary as Democratic party candidate.

President Barrack Obama endorse Bernie this morning with his "feel the Bern" comment. It did appease them for a while to listen to the President's speech. At the time of writing, there are report that Bernie had turned independent despite expressing preference and urging his supporters to vote Hillary over Donald. It could be just speculation.

The second day was still about bridging with the Bernie supporters:


One of my favourite satirist back in  the States 35 years ago on comedy program, Saturday Nite Live is now a Senator from Minnesota, believe that!


There was former Secretary of State, Madeleine Albright:


The highlight must be Bill Clinton:


"I met a girl ..." resonates the classic "To kill a Mocking Bird" as he weave past achievements of Hillary in between their courtship, marriage and life together to the gawking and bedazzled crowd. In one stroke, he tried to dispel allegations on Hillary without answering any with the punchline Hillary as the "real change maker".

Not to be left out was multi grammy award winner, actress Merryl Streep. She can still hold her own against the politician in public speaking at a political rally:


The third day was pack with power as we heard Former Secretary of Defense and Congressman, Leon Panetta:


A speech that inspire and gave hope. He dispel Donald Trump's make America great again to claim America is still great and we need to make America greater as he admit he still need work to done. Off course, it will back track if the leadership is not passed to Hillary.


Hillary is due to speak tomorrow morning. DNC coverage by CNN begins around 8:00 AM Malaysian time.

Today they talk about economy. The other whole day videos available in the links: Day 1, Day 2 and Day 3.

One particular video by former Governor of Michigan, Jennifer Granholm highlighted how job was created in states dependent on auto industry and the rejuvenation of the industry.


Ths good-looking Canadian-born Harvard law graduate had elaborated how it was done in 2012 DNC here. Her clean energy proposal is worth a listen here.

There were lots of other powerful speaker. Among others, Reagan staff Doug Elmert, Khizr Khan - the father of a fallen Muslim soldier, woman and Latinos Sheriff Lupe Valdez and fallen police officer family, and Rev. Dr. William J. Barber, II.

But off course, the long wait was for the finale as Chelsea introduced her mother. She spoke:


It was a great set-up for the Democrats campaign, but can they realised it after Democrats took to Bernie Sanders anti-establishment slant to bash Wall Street, and big business interest?

As far as we see, the issues and concerns expressed has lots of similarities to us Malaysians, though championed by one over the other or both side of the political divide albeit via their own unique ideological angle.

And maybe we were smitten by the finer looking politician in Jennifer Granholm but her practical non-ideological way of problem solving in addressing job problems and economic development without sacrificing social programs is someone more needed by Malaysia.