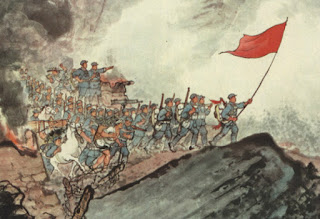 In 1912, China overthrew the last emperor of the Qing Dynasty. The anti-monarchist and nationalist revolution led by Dr Sun Yat Sen ended the warlord era.

Dr Sun's revolution received funding from the Soviet Union, which at the same time funded both the Kuomintang (KMT) and Communist Party of China (CPC). A lesson to be learned on having foreigners involved in any internal disputes.

That eventually led to a split in the revolutionary rank and civil war broke out between KMT and CPC. Successor to Dr Sun, General Chiang Kai Shek led the KMT and Mao Tse Tong for CPC. The war was not only about power and personality but also ideological.

Between 1927 to 1950, there was a halt in 1932-333 and the two warring faction came together to fight against the Japanese invasion in late 1937. Although the battle cease by 1950 and Communist technically won, it never officially ended. It only resulted with the existence of two China; mainland Peoples' Republic of China and Taiwan's Republic of China.

If DAP's current internal strife or Civil War prolongs, it could possibly emulate a similar outcome.

An analysis by a new portal, Malaysia Outlook, seemed to indicate a Civil War erupting in DAP sparked by the on-going corruption case against Lim Guan Eng and plans for a Penang snap election.


Speculation has been rife that Penang’s ruling party, the DAP, would dissolved the 40-man legislative assembly to pave way for a snap state election.

It’s learnt that the DAP central executive committee (CEC) had decided in a meeting on Monday to postpone the triennially held party poll, due for this year, for another 18 months as a shielding move for the snap election.

By postponing it, a source said a faction in the party, tagged as ‘Team A’, wanted to ensure that Penang Chief Minister Lim Guan Eng would continue as the party secretary-general until the next general election.

“By postponing the party CEC polls, Team A can get rid of all its enemies in the party’s candidature for the snap and general elections.

“This will ensure survival of the dynastic rule in DAP if Guan Eng goes to prison for corruption,” claimed the source.

DAP is counting on Prime Minister Najib Abdul Razak to call for the general election next year rather than in 2018.

DAP’s grand plan to call for a snap state election however, has hit a snag.

After a lengthy deliberation during the meeting, PKR president Dr Wan Azizah Wan Ismail said that the party was unimpressed with the reasons given to hold a snap election.

“PKR political bureau has taken a stand that we were not convinced with the objectives and directions to hold an emergency election,” she said in a brief statement released on Tuesday night.

But she said PKR would continue to deliberate on the issue with other coalition partners, Parti Amanah Negara (Amanah) included.

PKR and DAP top guns are said to have discussed the matter in an earlier meeting.

The DAP is split right in the middle now, thanks to the graft charges brought against Guan Eng.

While Team A wants a stand-alone snap poll, another faction, labelled ‘Team B’, is dead against it.

Team B wants to get rid of Guan Eng as the chief minister, and subsequently as the secretary-general.

An insider said a group of seven top Penang DAP leaders held a closed door meeting to discuss about the political situation immediately after Guan Eng was detained by the Malaysian Anti-Corruption Commission (MACC) on Wednesday June 29.

In the meeting, a consensus is said was reached after much deliberation that Guan Eng had to relinquish his position as chief minister once he was charged the next day.

However, the plan is said was foiled by the timely arrival of DAP supremo and Guan Eng’s father Kit Siang and DAP action national chairman Tan Kok Wai in Penang on that night of arrest.

“The local leaders were ‘advised’ by the party seniors not to rock the boat,” said a branch leader.


The popular Chow Kon Yeow is being lobbied by the Team B faction in DAP to become the next Penang Chief Minister.

Of course Team A is against it, hence postponement of CEC election and the urgency to hold a snap state election.

A reliable source said Team A had outlined plans A and B to face a snap poll.

Plan A is to retain Guan Eng as the chief minister if DAP and its allies win the snap election as expected.

But, if Guan Eng was sent to jail over the corruption charges he faces now, Team A would appoint another person, not Chow, as the chief minister.

That Guan Eng’s successor will also be appointed as party secretary-general.

If this happens, Penang will have another outsider, this time from Negeri Sembilan, as the chief minister.

The state seat speculated to be presented to Anthony Loke is Tanjung Bungah, currently held by Teh Yee Cheu.

Tanjung Bungah is a state seat under the Bukit Bendera parliamentary constituency.

Team A is said to have toyed the idea in a secret meeting among its leaders after the CEC meeting on Monday.


Teh, alongside woman assemblymen Yap Soo Huey of Pulau Tikus and Lydia Ong Kok Fooi, are expected to be axed for the state election.

According to some internal survey, current public support for the DAP and Pakatan Harapan is favourably 52%, largely due to sympathy that Lim was a victim of selective persecution and prosecution, against 48% for Barisan Nasional (BN).

The DAP wants to capitalise on that public sentiment to regain Penang because the party believes support could erode if Guan Eng was imprisoned prior to the general election.

“If Guan Eng is jailed, the voters could be convinced that the DAP government may not be whiter than white as claimed by the party,” said an observer.

With PKR “unconvinced” and Team B rapidly canvassing grassroots backing for its plan, how Team A going to push for the snap election would be a beguiling political play.

Penangites are in for an exciting few weeks. 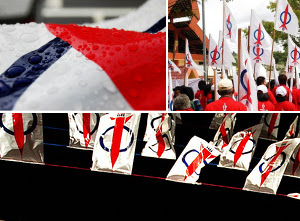 Naturally, the corruption charges by the Attorney General could be synonymous to the USSR for splitting DAP into Team A and Team B. However, it does not reach the level of ideological divide between Communism and Nationalism.

This DAP Civil War is still about power and personality. In short, it is about threat to the grip of the Lim and Singh on DAP.

One can go further back to the days of Kerk Choo Ting, Wee Choo Keong, Hu Sepang et al, but it would get lengthy. Suffice to say, the dissatisfaction against "Emperor" Lim and his "warlord" have been going on for decades.

Since there was a common enemy to fight against, which is something similar to Japanese invasion, in the form of UMNO, this is unity element to ignore these rebels. This time around, the "ideological" element has surface in the form of RM, not Rosmah Mansor, but Ringgit Malaysia.

Before war breaks out, there are events leading to it. So do not take the 9-dash line and other events for granted. It could lead to something bigger later. [More to be written later postings]

Prior to this, Lim Kit Siang had manouvred against possible uprising against him, summarised by the following pictoral [taken from this blog here]: 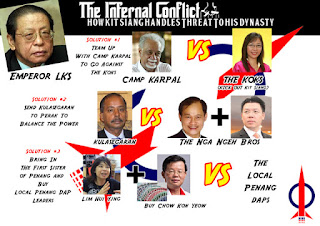 The Penang DAP have been brewing against the last minute entry of Lim Guan Eng into Penang for GE12 after much effort by Chow Koon Yeow [and indirectly Tun Mahathir for whacking Tun Abdullah. OK OK ... guilty as charged.]

There was a need to manipulate the DAP election of the CEC: 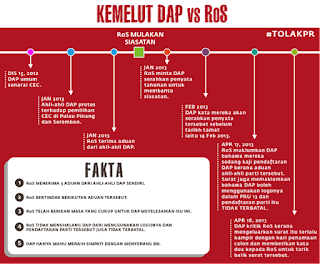 The CEC issue have brewing for quite sometime. In 2013, a report called Equity Report surfaced to reveal accounts of the manipulation of the CEC election [Read in ...deep tots here].

Karpal Singh slam the book for the intention to destabilise DAP. Utusan Malaysia added spin to the report on the book and got sued. Similar happening to DAP's action to silence Joceline Tan and The Star.

There is no more Karpal around to add roar to DAP's voice. Politics has changed. Public is fatigue with too much politics.

DAP or more precisely the Lims are on a survivor mode. Remember May posting, Honeymoon over for the Lims? As DAP would see it, they need something to unite the party. A snap election for Penang is a strategic idea.

However, PKR is not agreeable. Guan Eng have not been strategically nice to PKR. He removed PKR local council members. They have been sore over the state budget for their rural constituency. One cried during the state assembly seating. They almost voted against the state government in one usul from UMNO.

Now it is payback time. PAS too will see it as payback time for DAP's preference to back PAN or more politically correct to them, Amanah.

It will be tough for DAP to take on the state election alone but they will win.

DAP will still be around but if history still repeat itself, there will be a "Taiwan." UMNO already have off-shoots of "Taiwan, Penghu, Quemoy, Matsu and other islands". Time DAP have one too.

The problems with PKR can be easily settled. DAP could trigger upheavel in Penang PKR. Many of the Melayu core leaders in PKR have been ousted as Cabang leaders to be replaced by Chinese young members. As told by one retired media source, it involves 13 Cabang. [Not checked on the numbers].

If the snap election does not happen, UMNO and BN should just leave them alone to quarrel among themselves.

But if the snap election happen, UMNO and BN should focus on doing the campaign not so much to win but tailored towards GE14. As Anil Netto said in his posting, there is an elephant in the room and it will not go away for a long time.

Will Tun M campaign with DAP in Penang to defeat BN? It will be a blessing for UMNO. Their media should give lots of coverage.

interesting perspective ... still lim dynasty is bigger then the party which is not sustainable in current good governance era ... DAP real colour expose since they now govern a state ... people judging DAP by their conduct and performance ... walk the talk .. in reality more of plain talk cock only ... no where to hide for lim dynasty.. they have to go !!!