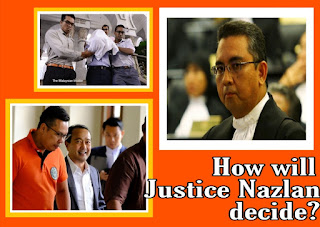 Failure to comply with the rules of discovery may, in more serious cases, result in an action being dismissed, or a defence being struck out and judgment entered accordingly - Shearn Delamore & Co.

And he told the court the transfer was acting on e-mail instruction from IPSB's fund provider, Yayasan Rakyat 1Malaysia (YR1M).

In case the public forgotten, Dr Sam was the second person remanded for questioning by MACC in July 2015 and was mentioned to be charged for corruption in the charge sheet leaked by Sarawak Report, which was allegedly prepared by Tan Sri Gani Patail and subsequently denied by MACC.

Dr Sam's statement proved SRC money did not go to Najib's personal account as per the charge made by AG and investigated by MACC. This could certainly throw off the case

Nevertheles, it doubtful High Court Judge Mohd Nazlan Ghazali dare to allow it. It is not due to the open secret among certain lawyers that he is Dato Gopal Sri Ram's "boy".

If he could not make MACC provide document to the defense team's discovery, it is unlikely he could dismiss the case or rule no prima facie.


KUALA LUMPUR: The defence in the corruption and abuse of power trial of Najib Razak has complained that the Malaysian Anti-Corruption Commission (MACC) is blocking their client from getting information on his closed bank accounts with Ambank.

Shafee raised this matter today just before the proceedings started after a short lunch break.

The lawyer said the bank was cooperative but the anti-graft body was a stumbling block. 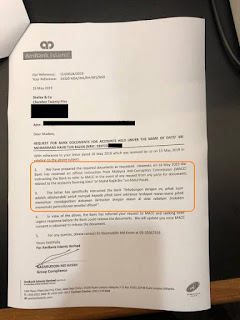 “This came to a stop recently when an AmBank officer told us (the lawyers) that the bank had been instructed by MACC not to provide any documents pertaining to Najib’s accounts without their permission,” Shafee told Nazlan.

He said the bank could provide the documents and Najib too was entitled to them.

“The account holder is always entitled to documents when the account is active or has been closed […] to know what had been transacted,” the news portal quoted him as saying.

He claimed the MACC’s order to the bank came from investigating officer Rosli Hussein.

He said the defence had just sent an e-mail to the prosecution before the lunch break.

Meanwhile, Najib, in his Facebook posting, lamented that the prosecution had rejected several times his lawyers’ application for discovery of documents in relation to this trial.

He said MACC yesterday suddenly sent a letter to the bank to prevent them from providing detailed transactions of his bank accounts.

The former prime minister claims, to his knowledge, such things never happened in other similar cases.

Ambank Raja Chulan branch manager R Uma Devi, who was a witness in the trial, said Najib had four current and one savings accounts.

Another three, all current accounts, were opened in July 2013 and closed in March 2015.

The Pekan MP faces six charges of money laundering and criminal breach of trust in the transfer of RM42 million to his account from SRC International Sdn Bhd, a former unit of 1MDB.

He is also accused of abusing his power as prime minister by giving government guarantees on SRC International’s RM4 billion loan from Retirement Fund Inc.

In his Facebook, Dato Najib said MACC wrote a letter to Ambank to block any documents relating to his personal account to defense lawyer. He expressed concern as it has never happened in Malaysia.

And Najib further disclosed that court was told of letters from Saudi Arabia's Ministry of Finance and Saudi princes confirming transfers to his two accounts, which could be witheld by MACC.

Sources claimed this development is an embarassment for MACC. When queried, certain officers responded with the remark "bodoh!" and the more politically correct described it as a bad move.

The portal Malaysia Choice blamed the boo boo to Dato Shukri Abdul in his capacity as Chief Commissioner and directly at the compulsive Director in-charge of AMLA, Muhamad Zamri Zainul Abidin. 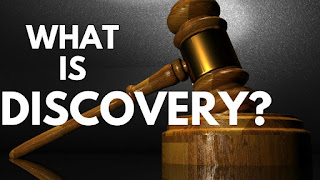 Tay & Co explained discovery is a process whereby each party reveal to each other documents in their possession before the trial to remove any element of surprise in the administeration of justice.

To take an extract from a paper co-authored by the late Tan Sri Prof. Ahmad bin MohamedIbrahim in an Australian journal:


In Malaysia, the High Court has power to order for discovery. This provision is clearly mentioned by section 25 (2) and Para 14 of the Courts of Judicature Act 1964 (CJA). Para 14 expressly requires that these powers are to be exercised in accordance with any written law or rules of court relating to the same. According to Order 24 rule 3 of the RC 2012, discovery of document is only allowed upon application by any party to the case and after the court making discovery order.

According to a legal source, withholding documents is not really an offence. However, it could raise adverse inference against prosecution that they are intentionally suppressing crucial evidences and can lead to an aqcuittal.

To quote from the same journal:


When the court order for discovery of information or document as prescribed under Order 24 rule 12 of the RC 2012, the party receiving the court order is expected to comply with it. If the party fails to comply with it the court may make order that ‘the action be dismissed or order the defence be struck out and judgment be entered accordingly.’ (Order 24 rule 16 (1)). Nevertheless, this court order is subjected to any written law or any rule of law, which allows the party so ordered to withhold the documents on the ground that the disclosure or production of those documents would be injurious to the public interest. (Order 24 rule 15).

While another source believe, since it is part of Court Order, it could amount to contempt of court.

To the common logic, what is the problem with account holder Najib requesting from the bank statements of his account? How does withholding the documents "be injurious to public interest" as that was the argument used by Tommy Thomas against earlier request for documents?

When this issue was raised yesterday, Tommy was visibly upset and may have presumed it was a defense ploy to buy more time. Well, it was him who asked for more time on the 1MDB case despite AGC memo to judges to not allow delay of the Najib cases.

How will Justice Nazlan decide? 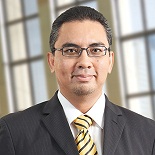 Mr. Mohd Nazlan Bin Mohd Ghazali serves as Head of Corporate & Legal Services, General Counsel and Executive Vice President at Malayan Banking Bhd. Mr. Bin Mohd Ghazali served as a Secretary of Malayan Banking Bhd since December 22, 2005 to April 8, 2015. He was practising at Zaid Ibrahim & Co. for 5 years as a Partner and served as its Head of Equity Capital Markets Department. He joined Maybank in 2005. He had been with the Securities Commission for about 7 years until ...

Justice Nazlan was appointed to Judicial Commission on April 10, 2015 and made High Court judge on January 30, 2017. Interesting that a Pakatan Rakyat blog gave coverage to his appointment.

He graduated with a Bachelor in Jurispredence and Master in Arts from Oxford University,. Malaysiakini reported him as an alumnus of MCKK.

Justice Nazlan took over the case in August 2018 to replace the then presiding Justice Mohd Sofian on calls 1by the Malaysian Bar to recuse himself as he is the younger brother of Pahang state executive councillor and Benta Umno state assemblyman Datuk Seri Mohd Soffi Abdul Razak.

If memory did not failed us, Sofian made a favourable decision in favour of rhe accused during the early part of case management to invite the call by the Bar Council. Justice Nazlan was transferred from civil court to take up this criminal case while Sofian was transferred to civil court.

It means a civil court judge is presiding over a criminal case for the first time. And, a civil case lawyer in Tommy Thomas is conducting his first case as prosecution and a criminal case.

The case relates to banking and investments which are usually dealt with in civil court. Justice Nazlan's background at Maybank, ZICO and Securities Commission should make him conversant in the subject matter.

However, decisions in civil cases is made based on the legal premise of "on balance probability", while criminal case is based on "beyond reasonable doubt" and burden of proof lies with the prosecutor.

On top of that, his years at SC means he may have withheld documents to the parties being charged. Since it is not an offense and seldom defense know IO knows, it is common practise among law enforcement and prosecution.

Will Justice Nazlan be "balanced" or "undoubtful" or political? 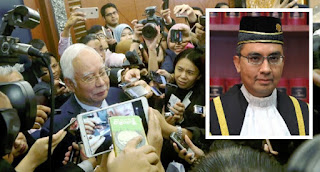 On the other hand, one observer said the manner the SRC case is being handled, including the pressure on the earlier judge to recuse has politics written all over.

Tommy's AGC request on judges to expedite the case is likely intended to meet the political narrative, agenda and scheduled roll-out of the new ruling government. For that matter, one of Shafee's quality as lawyer is his political communication skill to express the right political soundbyte for media. It was something he acquired as DPP, taking up politicians' cases, and comes naturally to an Indian Muslim.

Lawyers and judges deny it, but whether they like it or not and more so, contempt of court tend to be applied to only officers of the court - procesutor and defense lawyers included, cases that have political flavour has a tendency to have a political outcome. Take note of Muhammad Adib Inquest outcome.

The first sodomy case of Dato Seri Anwar bin Ibrahim ended against him. With political pressure applied, he managed to get Federal Court to review and acknowledge a major point of law ignored by 12 judges from High Court, Court of Appeal and Federal Court to gain his acquittal.

The graceful, fair play and forgiving Tun Abdullah Ahmad Badawi had a part. (Yeah, yeah ... don't bring up the past, please. Stick to the fact.)

The second sodomy case of Anwar was clear cut. Despite appeals made, he was eventually convicted by COA and held at Federal Court. By applying political pressure from abroad and manouvering with and against Tun Dr Mahathir, he earned a pardon.

Currently, the constitutionality of the decision is being politically questioned. More so, there are elements in PPBM out to obstruct his rise to Prime Ministership in order to stretch Mahathir premiership for few more years.

A new political rhetoric has also emerged on his status as an ex-convict.

Off late, many statements by politicians seemed towards building up sentiments and eventually it will be politicising cases in court. If the rulers succumb to the sentiment, court decision will be put aside and justice is done but subsequently denied. In the case of the innocent being judged guilty, it is a miscarriage of justice.

Dismiss SRC and move on for other cases. It is time wasting and could end up a royal pardon, because the government determination to imprisoned Najib is overdone and revolting to the public. Only those factually deficient and perception-centric within Kadir Jasin's coconut shell circle thinks public will be enlightened by what they think they know.
at 5/16/2019 03:08:00 PM

the case is an extension of "killing" Najib, or UMNO, with one year passed and both is still pretty much alive, adding to the fact that the particular person don't have much time left,only a matter of time if the judge decides whether to dismiss the case or not.