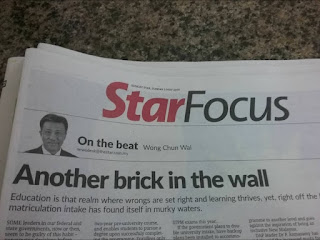 "Another Brick in the Wall" was Pink Floyd's several parts songs from their 1979 album, The Wall.

It is rock opera, which explores the life of a character facing abuse from his schoolteachers, an overprotective mother, and the breakdown of his marriage contributing to an eventual self-imposed isolation from society, symbolised by a wall.

Critics described it as overblown and pretentious but it is one of greatest rock album or all time and one of the most well known concept album of all time also.

This blog used Another Brick in the Wall to represent one brick or voice of many bricks that make up the wall.

Wong Chun Wai's column of same title in The Star today dealt with the recent issue of opening matriculation entry to other races.

Like food, education is an area many claimed to know because the eat daily and had some level of education, more so for those with tertiary education.

So it is best not to stretch one's view on education more than our limited expectation on the outcome of education.

Chun Wai rightfully pointed out the weakness of the Minister to make policy announcement without thoroughly thinking of the implication.

However, Chun Wai failed to comment a glaring conflict between the statement of the Minister and his Deputy.

Dr Maszlee U-turned a decision and maintain the 90% Bumiputera admission for matriculation. Teo Nee Ching denied a decision was made which was clearly intended to have the option for more non-Bumiputera remain open.

Actually, the statements of both Maszlee and Nee Ching typically reflect New Malaysia. It is basically old Malaysia narrative guised as PH promises (manifesto) albeit broken and failed.

Maszlee failed to understand the policy implication of his statements. He failed to come out with an equitable education access solution to the old racial quota.

While, Nee Ching is stuck in post-May 13 1969 DAP mindset and merely looking only at expanding Chinese interest under the guise of general Malaysian interest.

Chun Wai is suspected of being bias and his arguments subtly backing Nee Ching's chauvanistic stance.

During Dato Najib's administration, Chun Wai bodek him with his Moderate Malaysia tagline and earned a place on the Board of Trustee of a Najib initiative, Global Moderate Movement.

That tagline is no more heard and The Star seemed to pander to Malaysian Malaysia's ideology for equality across all races which not necessarily translate to a just Malaysia. Chun Wai's version of Moderate Malaysia was itself a guise for Malaysian Malaysia but merely lallang for a politically correct swing to the then BN government.

It is not the interest of this blog to pretend to be a Maggi Mee instant educationist, but Chun Wai missed the issue of matriculation program by looking at it as a mere cost effective route for students.

That was not the sole purpose of matriculation when it was established!

Why Chun Wai used Another Brick in the Wall as the title of his Sunday column beats the hell out of us?

Does he believe someone out there don't need no education and be left to self-imposed isolation from society?

The much hoopla over matriculation would have bern better used to encourage public discussion for the MOE of PH government  to resolve and standardise the confusing post-SPM education options for University entry or other career routes.