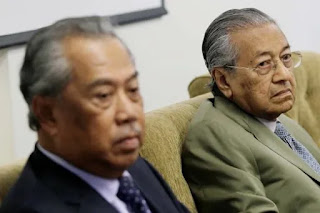 The drama played out by PPBM after the emergency MPKT meeting was that everything resolved and all will back Tun Dr Mahathir. Tan Sri Muhyiddin Yassin claimed ignorance and apologised to Mahathir.

There have been thousands of political quarrels that will have this sort of scene as part of the repertoire but subsequently, the quarrel will continue. More so, one is talking about the quarrelsome Mahathir.

Muhyiddin also has a history of being sneeky to play along, prepare and confront at the last minute to ouster his target.

Mahathir does not have much time and it is only expected that his move agaunst Muhyiddin will be soon and swift. The war between Mahathir and Muhyiddin has been declared.

Initially, the rumour was Muhyiddin will resign from the Johor PPBM Chairmanship after Hari Raya, but it does not take long. Mahathir already announced removed exco member, Mazlan Bujang as new state Chairman.

[Correction: The Star reported the then Chairman of PPBM Johor was former MB, Dato Osman Sapuan. Muhyiddin is PPBM President.]

The ole dictator has reared his ugly head again. The more reason no regret for leaving him and not fall for his so-called civil libertarian new facade.

Not only is Mahathir making his move on Muhyiddin, he has sent out a cybertrooper to fix up his main man, Dato Dr Rais Hussein.

Mahathir wants everything "My Way" and no way will anyone change his decisions and instructions.

He must have clearly said it to the Johor new MB, Dato Dr Sahruddin in their first meeting to maintain the old exco and not accede to any of the wishes of Sultan of Johor.

Subsequent to Muhyiddin's audience with the Sultan, the new MB announced changing the line-up. The power to determine the line-up lies with the MB and the Sultan could only request.

The new MB maybe a Gen Y and could have his own mind, but this budak jawa Muo will not have the guts to disobey Mahathir. The decision to change has to be Muhyiddin.

Frankly, the decision made was good. The man replaced was too vocal against the istana. 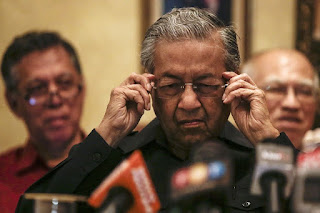 It was said that Muhyiddin told the emergency meeting that he was not told by Mahathir. Most likely, Mahathir did not buy as Dr Sahrudin would have told him. Talk in Johor is Muhyiddin replaced the exco line-up with his people.

Either Mahathir was testing Muhyiddin or he is setting up a bait, both way Mahathir is finally acting on Muhyiddin for silently making moves to dominate the party.

Before GE14, Muhyiddin was removing the protem divisional heads of PPBM to be replaced by his men. Dato Mukhriz went along with the scheme as he parked his friends everywhere too. But he was rather naive to not realise he was used.

Muhyiddin's men, by virtue of being more senior in politics, were generally made Division heads or candidates for MPs.

This was the reason for grassroot uprising before GE14 that saw founding leaders such as  Dato Hamidah Osman, Cikgu Kamarul and many more left in disgust for not being appreciated and being made use of.

It was not UMNO doing as alleged by PPBM then.

Muhyiddin should have been aware that Mahathir is in the know. For one, Tun Siti Hasmah was roped in to appease Hamidah and convince her to be patience.

Tun Daim passed a remark to fault Muhyiddin for weakeing the party before GE and he resigned to think that giving money for PPBM's campaign is an investment that will not pay off. He can say so because it was Muhyiddin that has been raising money in the hundreds of million for PPBM.

Leveling off the tree stump 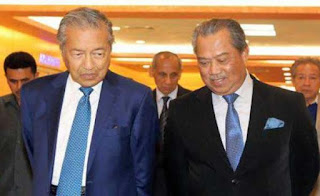 Muhyiddin then felt that as he is party President, he should be running the show and Mahathir should just be the figurehead. Correspondingly, he should be elevated to Prime Minister till the time Dato Seri Anwar takes over.

Over time, he realised that he was made, to use his own term, "tunggul" (tree stump). Mahathir. wield the influence. Despite no executive power as Chairman, Mahathir was dictating the show. Muhyiddin  was resigned to oblivion and media seldom gave him much coverage.

His pancrease cancer only worsen his political situation in PPBM to dicey and gullible. Although his cancer condition is under control, thanks to the chemotheraphy and complimentary dietary plan, the thinking on the ground is that it is time for Muhyiddin to make way.

Without lifting an eyelid, Mahathir is ready to level the ground off the tree stump. And, former NST reporter turned PPBM cybertrooper, Firdaus Abdullah's twitter posting is meant to be so via Rais Hussein. 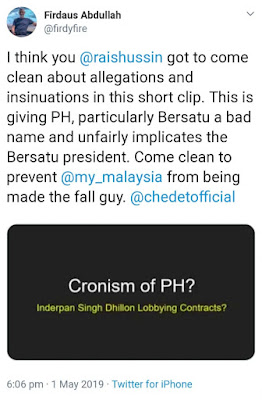 Firdaus is lazy at research, not informative and analaytical enough to figure things out himself, and plain feudelistically loyal to Mahathir. 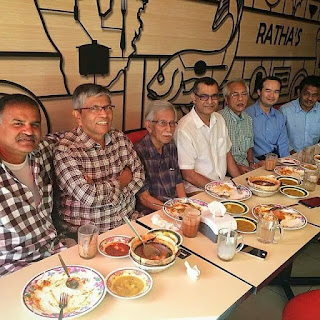 And maybe Daim too, if he remained loyal to Mahathir.

Firdaus's intention to fight corruption maybe sincere, but what he does not know is he is not fighting against Muhyiddin's proxy from getting the contract to bring in foreign worker. Decision was already made.

Indirectly, Firdaus is helping people linked to Mahathir and Daim to get the contract instead. Four companies heard to have been approved by cabinet are related to Berjaya group, Maju group, MyEG and Yasmin.

Quite sure everyone knows, who Berjaya and Maju are linked to. MyEg is the public listed company in, which the Chairman is Dato Noraesah, anak menakan to former PM Tun Abdullah Badawi. Yasmin group is brought into the bidding by Tun Daim, but whether it is proxy or not, it needs confirmation. It could even be Mahathir's family member.

That is the info from a source that has been reliable in the past.

With Muhyiddin as Home Minister, this is a low hanging fruit to make hay while sun shine for the #KerajaanSePenggal.

It is not easy for Muhyiddin or his men to take a bite into cancelled RM3.5 billion SKIN system contract for Immigration from Prestariang. The corporate sharks are controlling the beach and corporate vultures controlling the sky against any other interest.


When Daim's brother-in-law, Dr Muhammad Khalid said contracts are cancelled and reviewed in order to remove big profit margin and cronies or proxies of BN from making money of contract, it is trademark Daim's half truth. It is meant to replace with one of their own and deny BN source of funding.

Mat Khalid bullshit and lied in this video, particularly in the opening on stock market. Mana boleh small cap did better than index?

Malaysian stock market did worse than all those countries he mentioned. Between an economist and a stock market operator, what does economist know about any financial market?

His style of talking seemed to emulate Daim's 1, 2, bang! What happenned, why it happenned and this is the solution said in simple folks logic but factually not right. However, the views of this PM's Economic Adviser is seldom presumptous.

Mahathir to be PPBM President


So, upon whacking Muhyiddin through his crony, what is Mahathir's plan?

This game by journo-turn-cybertooper is planned. The charge against Muhyiddin will be led by his own nemesis, Dato Khairuddin Abu Hassan. He left PPBM to join Amanah instead because of his quarrel with Muhyiddin. 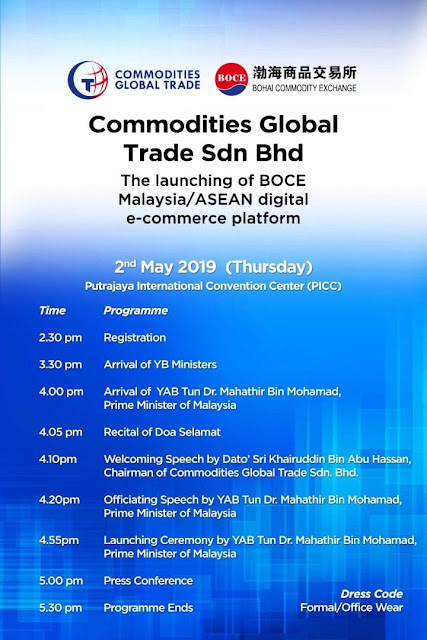 Khairuddin is now the Chairman of a Putrajaya-based China company, Commodities Global Trade Sdn Bhd. He will be delivering a welcoming speech for Mahathir today.

The attack against Muhyiddin will intensfy and it will be led by a group of cybertroopers calling themselves Nagas. It could be the same group that launched the same attack against Najib. Nagas is the name of a mamak shop near Seri Pacific and PWTC where UMNO political boys hangout. It has since changed name. . 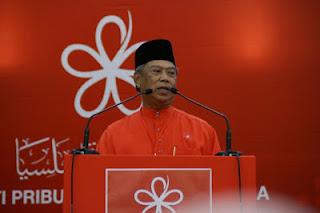 Words on the grapevine is Muhyiddin will be nudged to resign and not contest the PPBM party election due after Hari Raya. The date is still not announced yet, but the jockeying has begun. The latest it should be held is by October.

If Muhyiddin refuse to budge and still defend his Presidency, Mahathir may run against Muhyiddin. If all members gets to vote according to SASU system, Muhyiddin has no fighting chance. Naturally, Mukhriz will remain as Deputy President and will takeover the Presidency from papa.

Dato Redhuan or Pak Wan the flying car Minister should not dream of taking on the chosen one, even how boboi he is. If Muhyiddin step aside and avoid cases like BESTARI from further investigation by MACC, Mukhriz will be PPBM President.

There goes Azmin too. Upon being made Minister in charge of Economics, he does not look at all impressive. Azmin could have used the Felda white paper to the hilt, but it made no impact. The potential as PM material is still not realised. 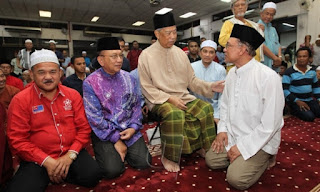 The Muhyiddin disobeyance could also be pre-planned. There is the possibility that Muhyiddin and his team will move to Anwar and he will be back in the running. His numbers will fare better.

For all you know, Azmin is pretending to be on Mahathir's side. The month Anwar is said to make his move is May to June.

Mahathir's plan to bring more UMNO MPs to jump is also a serious one. Dato Bung Mokhtar will be charged soon for offense at FELCRA. That is punishment for not crossing over.

As far as Dato Hishamuddin, who lately is being whacked from insde UMNO by Zaharin Yassin and Rafi Awang Kecik as the mastermind behind getting UMNO MPs to crossover to PPBM, the corruption case on his boy is not Mahathir's doing. But, Anwar and Lim Guan Eng discouraging him from crossing over.

well, judging by the infighting that is brewing, it should be suffice to say that we might not even going to have #kerajaansepenggal , most likely #kerajaanseparuhpenggal