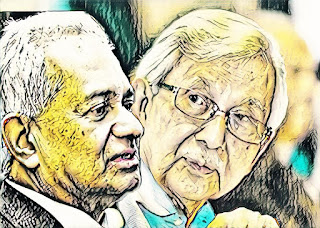 If you take on the mantle of a profession or an important job, you are taking on the responsibilities and duties which must be fulfilled by those in the profession or job.

Taking on the mantle means taking charge or assume role of leadership. Cambridge dictionary described mantle as a position of responsibility or authority.

This statement confirmed Tommy lost his mantle. It is unthinkable for a supposedly brilliant defense lawyer to assume public could not figure it out. For quite awhile, this blog saw indications he was losing it.

Back in June 2018, this blog posed the question of whether he can prepare the cases on 1MDB, SRC etc. against Dato Najib and Datin Rosmah. 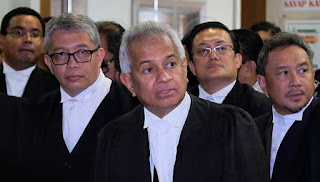 Tommy said they have a strong case against Najib and Jho Low based on the charges pending in court.

Piling charges in court does not mean there is solid proof. It only means there are triable issues, but left to the court to ascertain the merit of the evidences after scrutiny by defense lawyers.

If Tommy has solid proof, why the delay in the 1MDB trial to August? Why Deloitte and PMO was raided recently? Why the pondering to prosecute the recipients of alleged 1MDB money?

If it is to be done, make sure PPBM's Dato Mustapha Mohamed and Ruslan Kassim, Dato' VK Liew and LDP, and UPKO are charged too. No exceptions!

Mahathir himself admitted not enough proof to call for RCI with the excuse government still formulating concrete charges against Najib on 1MDB.

It means still gathering evidences and trying to put together a concrete charge that could ensure the imprisonment of Najib without need to abuse power to interfere in the judiciary.

Seriously, why the drama of finding new lead for Jho Low when Special Branch should be in the know already?

The latest propaganda is alleged sex scandal of Jho Loh.

Bringing back Jho Low from "China" means world attention will be on him and not Najib. The world knows he is the culprit!

SRC case too is not hitting the ball out of  the park. Ony political pressure would make High Court judge Nazlan Ghazali decide there is a prima facie case against Najib.

In yesterday's proceeding, Dato Dr Shamsul Anuar Sulaiman reiterated the same line that the money transfered by Ihsan Perdana to Dato Najib account was from Yayasan Rakyat 1Malaysia. He was not in the know the account belong to Najib and money ultimately came from SRC.

The subsequent witness and former KWAP CEO, Dato Azian Mohd Nor reiterated the same facts, which KWAP legal head clarified Najib is not to be blame.

DPP Ishak Mohd Yusoff in a "beat about the bush" manner failed to implicate as though Najib's directive led to KWAP's approval of loan to SRC.

Meanwhile, the latest from the Ajib Inquest saw Tommy's interference to remove Syazlin Mansor, the lawyer representing the Ministry for Housing and Local Government.

The lawyer's husband is Minister Zuraidah Kamaruddin's Press Secretary, but Zuraidah has since absolved responsibility to say she is redundant.

Syazlin inappropriately was cross examining in a fact finding Inquest, but why AG removed her with few days of Inquest left?

Tommy said she often contradicted DPP's position, but would the DPP's action beyond usual practise be misconstrued as fix up by Indians in authority to cover-up the murder of a Malay by Indians?

Tommy acted as if he is about to lose his job, but still not know what is expected. PAS has called for his resignation.

Seriously, Tommy absolutely lost it when he called on civil societies to press on Pakatan for reform. For heaven's sake, he is the AG for Pakatan. Why is he criticising the government he is serving?

He is admitting his own failure to bring about the promised reform. At least, he admitted AGC are mortal and indirectly his solid proof may not be as solid as any immortal beings could provide.

Daim losing his mantle too? 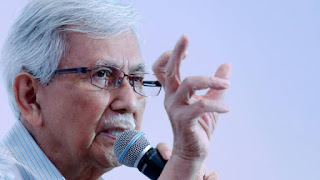 The same could not be said of Tun Daim.

The Chairman of Council of Eminent Persons should still be in the know and capable of moving things. He could call on a former Chief Justice to resign.

In a previous posting on GST, this blog wrote:


... the outcome of Daim's six months promise to straighten things out with a Guan Eng and Tony Pua sabotaging his every move would be an interesting case study and pivotal moment in history and politics.

It comes on the back of a scenario where the government's back is against the wall and Guan Eng cannot stop talking.

The PH government need Daim to return as Minister of Finance for the third time and replace Lim Guan Eng.

The country's problems need to get fixed. There should be serious effort to fix it but none seen convincingly done.

It does not exude confidence to foreign investors. PM could mistakenly announce free toll. In the past two days, foreign investors dumped RM360 million worth of shares which was absorbed by local institutions. 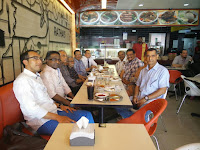 As it is, Daim seemed to have no one capable of assisting him.

He is being assisted by Dr Muhamamd Khalid, Faris Rabidin, Endie Shazli Akbar Ali and his son on policy formulation.

Feedback received from senior people are not impressed with their experience in policy formulation for crisis management. How useful is Faris's Indonesian experience?

They have political biasness and presumptous in their assessment of problems that need fixing. Dr Muhammad accused previous government of high debt but an Investment Banker notice himself pursuing lons in Switzerland.

Only Tan Sri Halim Saad is seen with Daim during the trip to China in the negotiation of ECRL but is Halim his "operator"? Where are the rest of his men?

Does he has other younger members able to execute and divide up work without the need for hand holding?

On media, Daim is assisted by Dato Kadir Jasin, but him and his other hangers on, including a so-called Corporate Adviser of Protasco have only secondary education.

They are merely doing political propaganda instead of confidence building public relations on the economy for government.

Kadir is losing credibility as fast as Salleh Said Keruak or Mat Maslan used to. An AMK leader openly said the public has stopped buying into repetitive attack on Najib, 1MDB, and such.

The fact that Daim is talking to the press more often these days than working is worrisome. It shows Kadir not doing an effective job at Ilham Centre and running out of ideas. .

Whatever the actions of Daim's "media" team towards Guan Eng, it is difficult to move forward with Guan Eng undermining  and presuming his initiatives are to feather his nest through cronies.

There was a poorly concocted and inaccurate claims of a Mr X in message made viral by DAP RBA in respond to his attack of Guan Eng.

The latest must be Mahathir statement on toll which is meant to undermine Daim by Guan Eng.

Apparently, Daim is feeling dejected and frustrated, but at the same time, his side is still relently undermining Guan Eng and blocking him and his proxies too.

However, Anthony Loke may not have the same attitude as Guan Eng towards Daim.

His decision to request another six months of suspension in the implementation of the RTS would have been consulted with Mahathir.

However, Singapore have been looking forward to start work on the RTS. They are in no friendly mood towards Malaysia. Their propaganda against Malaysia is on overdrive. Cancellation of RTS will cost!

RTS agreement was put together in 2010 meant to solve the congested causeway daily traffic and worsen over weekend. It is inhibiting the flow of people between Malaysia and Singapore.

Recently, Mahathir side made an issue with the Sultan over Bukit Chagar land. The one raising it is Kadir. It is political but indicate bad handling of the RTS matter.

When it comes to matter involving Singapore, Mahathir would only consult Daim. He was assigned to deal with Singapore while Mahathir quarreled and hurled insult at Singapore in public. Most notable was the KTM land from Woodland to Tg Pagar.

Since PH tookover, Malaysian government sold off the joint development of the land with Khazanah having majority, which was the resoluton to the problem. 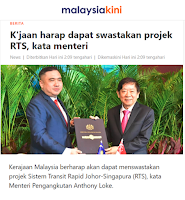 Among the ideas floating on RTS is to privatise RTS to a private company to built, operate and transfer or own the project, but fare will be expensive to commuters.

Privatisation is the worse approach to public transportation. Has Daim not learned from past experience, which saw Prasana tookover failed privatisation of Putra, STAR, and Monorail?

Is the current manner Malaysia is dealing with Singapore and RTS indicative of Daim losing his mantle?
at 5/29/2019 01:40:00 PM