TH's Q1 "profit" for the starry-eyed and gullible to believe 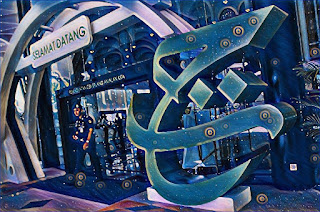 Three strikes and the batter is out in a baseball game.

Allah is great! Currently on the third consecutive strike, but have not let up on fasting. With the neb on and fingers still able to pound away on the keyboard, Bursa Malaysia this week comes to mind.

CI plunged 30 points first hour Monday morning only to recover back in the morning trade. Prior to the event, there was a barrage of negative reports on Malaysian economy, ringgit, stock market, and investors by-passing Malaysia.

It turns out Investment Bankers churning out the negative reports (and foreign media "viraling" as news) went on a "house buy" to go against their own bearish reports. The gullible locals were selling into a bear trap.

Nevertheless, the market did not turned bullish but bearish with one analyst giving a bottom target for CI at 1580 and one BFM mid-morning comment was talking about 1600 as resistance, intended as support perhaps.

The market would not have been this blur had some smartass accountant and their hair splitting standards not handcuffed local institutions from sticking themselves out for the nation's bourse.

With market condition as such, suddenly Lembaga Tabung Haji (TH) announced its first quarter profit of RM440 million on the back of RM623 million earning. One can't imagine how many out there will be gullible enough to believe.

For more than a full quarter, TH was under a barrage of criticisms over hibah announcement delay, fund restructuring, colossal loss from questionable impairment interpretation and the figure, and paltry hibah of 1.25%, then this surprise.

Too good to be true.

Millionaires must be depositing for TH's 1.25% hibah 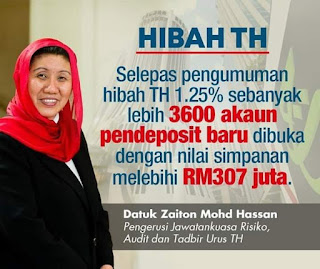 Prior to that, Mujahid claimed TH had received RM1 billion new deposit.

And before that at the time depositers were taking out money from TH upon the bad hibah announced, a poster of Dato Zaiton Hassan was viraling to claim TH received 3,600 new depositers with RM307 million deposits.

The quarterly announcement came with a claim TH received more than 91,000 new accounts and deposits of RM4.3 billion.

The maths were done and the average amount deposited per account does not make sense. On the latest deposit claim, celebrity turned political activist, Ellie Suriaty came up with RM42,000 per account.

Nevertheless, they did admitted there were RM4.6 billion withdrawals. The time Mujahid made the RM1 billion claim, TH dare not acknowledge then that the withdrawals were believed to be RM3.8 billion!

The new depositors figure really does not make sense to have a per account deposit of such amount. Talk in the market is TH depositers have been shifting their money out to other banks or into investment schemes.

The biggest beneficiary is Tan Sri Dr Zeti Akhtar Aziz's PNB. Coincidently, it is as if it is in appreciation for Zeti pushing the names of Dato Zuki and Zaiton for key roles in TH over more credible alternatives.

The alternatives were more familiar and conversant with TH and the governing act. They would not have cost the government a total RM17.8 billion bailout and bear for Haj subsidy! 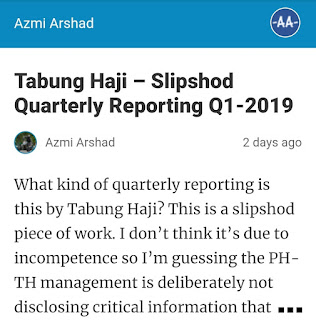 For TH to make such claims, one wonders whether it is sustainable or another accountant magic trick of conjuring up figures to satisfy their true political masters, DAP.

For a start, ICAEW trained Azmi Arshad, whose got a blog now, criticised the announcement as slipshod. How could one make a quarterly announcement on a standalone without any comparison?

Furthermore, the explanation is so un-"accountant" as it lacks proper and credible explanation.

One can talk of transparency, accountability, and integrity. But when one's back is against the wall and one's reputation is at stake by bloggers' and facebookers' writings that turned out true, its all down the longkang (drainpipe)!

Sukuk bond not issued yet! 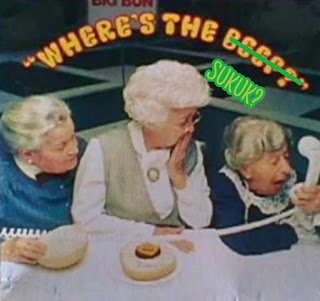 Notice this extract of the news report:


TH expects its revenue will continue to increase from the second quarter onward with the issuance of sukuk by Urusharta Jamaah Sdn Bhd which will provide a return of almost RM800 million a year and the implementation of a new investment adjustment process.

Sukuk would only be issued by UJSB in the second quarter?

Didn't Zaiton told Najib Shaari in the Hijrah Forum not to make negative aspersions but evaded from saying he was right that asset was transfered without the corresponding so-called RM19.9 billion valued sukuk bond exchanged?!

This was the forum she came to the studio ever so arrogantly without any interest for small talk with the young analyst before the LIVE program, and a PA chasing her around, and paid to carry her handbag.

Obviously, the source of this info came from within Hijrah TV.

This blog wrote in earlier postings that part of Zuki's repertoire of his so-called turnaround ability is the dishonest kitchen sinking to write off anything within sight to blame previous management.

Easy work to wash their hands than the trouble of steering the deal into profitability or balancing the losses with other profit making ventures to minimise the impact to the organisation.

Write off, blame past management, and come out good later. Who cares about the organisation? Get my fat pay and be damn after contract expire.

More so, Zukri is a banker and not a corporate businessman, thus void of any entrepreneurial skill and ability to smell a business opportunity. Financial turnaround and juggling numbers with big strategy talk is the only way he could do.

Over-provide to write back later? 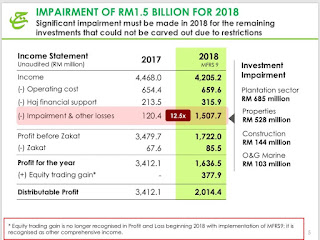 Zukri was suspected of doing overprovision in his impairment of TH investment, blame previous management, and then do a writeback.

It makes him look as the man with the Midas touch, but if so instructed, its nothing a bottle collector for recycling centre cannot do.

The above came from a Member of Parliment, who spotted the impaired figure for 2018 is unusually high vis-a-vis the profit generated. His concern was that had it not been provided as much there would have been more hibah for depositers instead of the paltry 1.25%.

The amount distributed for hibah was a only bit more than RM900 million. And, the YB expected the asset sales to UJSB would have churned some profit, in which TH now acknowleedge.

Why do they need to impair so much?

Is it not suspiciously the overprovision then write back trick? !

It was also the basis for the suspicion the whole exercise that inadvertently ended up costing billions of taxpayers money to bailout is intended to shoo away depositors, size down, and end the legacy of an institution envisioned by Zeti's father. 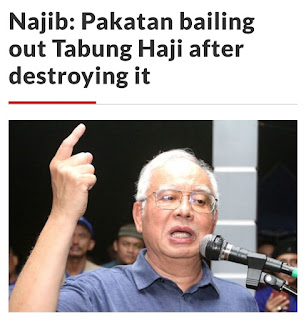 TH would definitely deny, but it looks for certain that the so-called first quarter profit is a conjuring trick and not likely to be real.

Both the economy, and stock market is not any better and likely to worsen further in 2019. The Malaysian bond market will no more be vibrant the moment Russell Index takes Malaysia out. Foreign portfolio and FDI investors are selling out and by-passing Malaysia.

There have been no positive news on the economy, and no credible forecast leading to any light at the end of the tunnel, except Tun Dr Mahathir assurance and request on media to write only good things on the Malaysian economy.

TH needs Allah to fulfill their doa on the miraculous night of Lailatul Qadr to hope for a turnaround to happen. Off course, one has to be dedicated to the ibadah to get attain that special night.

It means the profit they claimed to make for the year and reported as profitable first quarter likely came from the recent RM1.7 billion bailout from government.

Their confidence to forecast may have been due to the existence of RM17.8 billion bailout over the seven year duration of the sukuk bond that could be massaged as profit.

Accountant and bankers do not know how to do business, but they are good masseur of the numbers generated by the effort of true business managers!

And, the investing community were misled by TH and Mujahid communication that the sukuk bond is zero coupon and bullet repayment basis?