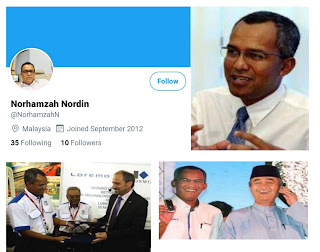 In the news today is about "Santa Claus" for Dato Mukhriz being convicted by Session's Court for offenses under the Securities Industry Act 1983 and Capital Market and Services Act 2007.

In a piece entitled, "SC chairman axed, will Ranjit be investigated?" dated October 1, 2018, the blog The New Malaysia Times highlighted that Norhamzah was acquitted for the same charge in 2016,

It is commendable of new SC Chairman, Syed Zaid Albar, brother to now PPBM member Tan Sri Syed Hamid Albar, for revisting the case in May 2018 after the departure of the jagah Tan Sri Ranjit Ajit Singh.

Norhamzah was PPBM's War Room Director at the last GE14. Apparently, he switched his political allegiance from UMNO to Parti Pribumi Bersatu.

His crossover from UMNO to PPBM may have been before GE14 to enable him to be entrusted the role as War Room Director.

And he may have gained the trust of Mukhriz as a "Santa Claus" to his cause but the source did not elaborate on the "toys" distributed and the recipient "needy children" for the 5 year once festivities .

NMT issue with Ranjit was due to Ranjit's alleged selective prosecution of BN and instilling fear to prosecute opposition supporters. Norhamzah was presumed to be protected by Ranjit for the 2016 acquital.

The trio was charged in June 2011 and acquited in September 2016 on the ground prosecution failed to prove any prima facie.

Subsequently, High Court Judge Datok Azman Abdullah made a judgement that prosecuton had proven prima facie and called the trio for defense in late May 2018.

Court today sentenced Norhamzah and Mohd Azham with severe penalty of each is to pay a fine of RM1.45 mil AND serve a two-year imprisonment term.

The judgement today indicate there was a playful happening at the court during the 2016 decision.


It is still two years too early to be distributing toys for "raya", so upon being acquited in 2016, Norhamzah's motivation to join PPBM and get involved with the 2018 campaign is worth pondering.

It is a lesson to all politicians, especially Mukhriz to check the background of people working with their political activities.

The latest revelation by a PPBM cybertrooper and Mahathir's fanatic shows PPBM politicians are making hay while the sun shine in fear of PPBM will only be a #KerajaanSepenggal.

Did Norhamzah made a business decision to support Mukhriz political effort? .

In an interiew with The Star in 2006, Norhamzah described his company, Kosmo as a research and engineering based company involved in the automotive business and mobile manufacturing. Business may have been hard in 2011 when the offense was done.

Despite being an UMNO member, Norhamzah and Azham's court case may have hindered Kosmo from access to new oppurtunities under the previous BN government. Norhamzah could have decided to put his money with PPBM.

Did Norhamzah supported and bankrolled Mukhriz for the sake of friendship as any ANSARA members extended?

No confirmation that he is an MRSM mate of Mukhriz.

Nevertheless, Norhamzah may have supported PPBM out of the need to see the end of selective prosecution of authorities to protective the former ruling party and pick on opposition. He certainly sacrificed himself.

But, NMT must dig further to understand why CEP selected Ranjit as member of the Board of Director of Khazanah Nasional?