Of late, everyone speaks about the oil marlet with much gusto and with authority. Market contrarian philosopher would see that as a typical situation of bullish at the top and bearish at the bottom. It's an alarm bell to do the reverse to what others' are doing.

To back up a contrarian views are these excellent analyses.

The first is Dato Idris Jala's fundamental observation as reported by The Star on June 5th entitled "Idris: There’s no global fuel shortage". Second one by blogger S. Dali of Malaysia Finance blog that got published in The Star entitled "Potential puncture in the oil bubble".

The greatest fool theory says that those alarmist will end buying at the top. By the look of it, Abdullah may have made himself as the greatest fool to decide at height of market exuberence. 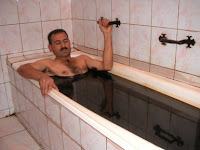 ISTANBUL: There is no shortage of oil in the world and its present price level was driven up by unreal speculation, said Malaysia Airlines managing director and chief executive Datuk Seri Idris Jala.

He said the present oil price at over US$135 was unrealistic and based on certain global events that might have caused a shortage of supply.

“These people (speculators and hedge funds) buy oil futures and say that this or that event may cause an oil shortage.

“Not very long after this, people react to this and by then the message would be ‘there is a shortage of supply’ even though there is none,” Idris told the international media here at the close of the 64th International Air Transport Association annual general meeting.

IATA, which is an association of legacy full service airlines with over 200 members, had issued a statement at the end of its meeting that the industry was now in a state of an emergency because of the fuel price crisis.

Idris was a former senior executive with Shell Plc based in London and the Hague for almost 20 years. While there, he had headed various departments, including business development.

Speaking as a former oilman, Idris said there were two ways to see whether there was an oil shortage.

“First, look at the oil tankers at sea. If they are not moving and just floating out at sea, that means they have no crude or processed oil to transport. That is not happening and that means there is no shortage.

“Second, go to the petrol stations. If there are long queues, that means there is a shortage. Again, this is not happening and this can only mean there is more than enough supply.

“As an ex-oilman, I tell you there is no shortage.”

Idris pointed out that certain analysts and financial companies that produced reports about the shortage were also oil futures traders.

Asked what he thought was the fair value of crude oil at present, Idris replied: “US$40.”

He also criticised speculators and hedge funds, saying that he did not trust anything that he could not touch.

“I always believe in the brick and mortar – something I can touch. These people are trading with nothing.

“Many years ago, we at Shell had wanted to buy Enron. I was leading the team then and we hired over 60 consultants to study how a company with no oil fields, refineries or gas stations could make so much money.

“One of the consultants tried to convince me to recommend to the Shell bosses to buy Enron but I said no because I could not touch what they were trading in,” Idris said in the one-hour briefing for the media about MAS’ performance and future.

He only expressed his opinion on the oil crisis after being asked by several journalists.

Idris was proven right on Enron because the so-called energy company collapsed four years ago under massive accounting fraud.

Potential puncture in the oil bubble

ACCORDING to Shell Oil president John Hofmeister, the “proper” range for oil should be somewhere between US$35 - US$90 a barrel.

Based on that statement and assuming it’s more or less accurate, what do you think we should make of the current oil price of US$130 - US$140 per barrel? How much of the spectacular rise in oil is due to speculation? That is important to determine as excessive speculation could basically drive prices much higher than its real demand-supply equilibrium.

Speculation stands out as the biggest culprit for the oil price boom.

Many reasons are being cited for the oil price boom – speculation, fundamentals, dollar weakness, fuel subsidies, inflation, low interest rates. All factors are playing a part at some time or another, with different factors dominating at various times.

But one factor stands out as the biggest culprit – SPECULATION.

According to Michael Masters, index speculators are the primary cause of the recent price spikes in commodities.

This is not selective information to back my view as he heads a highly respected fund management company – Masters Capital Management.

He recently (May 20, to be exact) delivered a testimony before the Permanent committee on “Investigations committee on homeland security and governmental affairs” to the US Senate. Hence his testimony carries a lot of weight.

Masters talked about the resurgence of several groups over the past five years who he deemed as newcomers to the “commodity speculation scene”. They are corporate and government pension funds, sovereign wealth funds, university endowment funds and other institutional investors. Collectively, they constitute the largest share of outstanding commodities futures contracts than any other group.

Masters refers to them as “index speculators” because they distribute their allocation of dollars across 25 key commodities futures according to popular indices, namely the S&P Goldman Sachs Commodity Index and Dow Jones AIG Commodity Index.

The rising interest in commodities was largely based on the assumption that historically, commodities have no correlation to fixed income and equities. It has to be noted however that while previously the futures market may have been relatively “not big enough” to provide this kind of diversification, this has not been the case over the last 10 years.

As at end 2003, assets allocated to commodity index trading stood at a whopping US$13bil. As of March 2008, that figure has ballooned to US$260bil!

Some political leaders have pointed their fingers at speculators as the primary culprits for driving oil price by more than 50% over the last 12 months alone. In my opinion, they are correct, partially.

The new index speculators are not your average in-and-out trading outfits. Collectively, these funds have stockpiled (long on inventory via the futures market) 1.1 billion barrels of petroleum. It’s not like they are actually going to take delivery of these oil barrels, but their stockpiling is tantamount to hoarding 1.1 billion barrels from the real market place. If real supply is constant, one can imagine what the 1.1 billion long positions will do to oil futures prices if they are rolled over.

Apart from index speculators, a huge number of long-only commodity funds and plethora of dedicated commodity ETFs have entered the scene in the past five years. A quick glance at Nasdaq will be able to give you an idea on the rising emergence of ETFs.

Essentially, they are long players, trying to cash in on investors interest on a prolonged commodity bull run.

But are they really interested to consume these commodities? NO.

The loophole allows pension funds (or any other aforementioned funds) to enter into a swap agreement with an investment bank, which can then trade unlimited numbers of the contracts in futures markets.

Even more interesting is that the WTI crude oil futures traded on ICE in Europe are exempt from regulatory action!

Amidst all these hoopla, it would appear that Opec, which is traditionally everyone’s punching bag, is probably an innocent party to this catastrophe, this time around.

According to market estimates, the actual costs incurred in producing the most expensive oil is only around US$70-US$80 a barrel; the rest of the current oil price represents the market’s risk premium plus speculation.

Note, that assumption is based on the high end of the cost spectrum and most are produced at a much lower cost.

Bearing in mind that commodity futures markets are much smaller than capital markets, these substantive funds will have a far greater impact on commodity prices.

In 2004, the total value of futures contract outstanding for all 25 index commodities was US$180bil. In 2004, index speculators poured in US$25bil into these markets – a significant 14%.

It would be safe to assume that the sums being ploughed into the commodity futures markets in the ensuing years to present is much higher.

Rising trend means index speculators are making a lot of money. The run attracts momentum players. Typically, rather than take their profits and run, index speculators tend to stay on because the allocation is a diversification bet not a straight out investing bet. They are more likely to reinvest their compounded gains and even more due to profit-motivated demand thinking.

The latter will trade, take their profits and run. The former prefers to keep the long position and generally, never sell. Instead of providing liquidity, index speculators are actually draining liquidity. Even if Opec promises to release more oil now, it would probably not dent the rally by much.

If index speculators weren’t a group but an individual, regulators would be on his back like a hawk and he’d be hauled up for attempting to corner a market.

Masters highlighted to the US Senate that it is most important to close the loophole in the Commodity Exchange Act 1936 which exempt investment banks from speculative position limits when these banks hedge OTC swaps transactions.

According to Masters, almost 90% of index speculators effectively enter into commodity index swaps and face no limits on their positions.

To puncture the oil price bubble, and yes, it is a bubble, Masters recommended that pension funds be forbidden from using commodity index replication strategies.

He added that the swaps loophole should be plugged immediately, thus causing all speculators to face position limits.

In all likelihood, if the recommendations put forth by Masters or moves similar to that are put into action, the oil price bubble may be punctured.

Judging from market developments in recent weeks, it may be wrong to assume that “nothing will be done” by the US lawmakers soon.

We will find out – very soon.

Paklah is too dumb to know about world oil politics. Let's hope Idris Jala is proved right, to confirm a fool for a PM.