Here we go again. This time it is Clintonesque in nature, i.e. internship problem.

Like revisiting 1999, a police report was made against Anwar Ibrahim by his personal assistant on Saturday at 5:45 pm at the Jalan Traver police station claiming sodomy. The report is available here at Rocky Bru's.

Expectedly, Anwar denied in a press release made through PKR's Vice President, Sivarasa on Sunday.

Wan Azizah claimed conspiracy and showed the picture of Saiful Bukhary (in blue in the picture on the right) with Khairul Anas of the DPM's office. Since then pictures of Saiful with Tok Pa and Shahrir Samad appears leading many to claim he is a Government stooge.

If Abdullah is in the habit of blaming Dr Mahathir whenever something unfavourable crops up, Anwar's natural tendency is to blame Najib. With too much conspiracy theories these days shrouding many events, nothing seemed rational and belieavable any more. Then there is the Malaysians tendency to be partisan and personality driven.

But the right position is to let the police do its investigation. Should there be sufficient evidence, then the judicial process takes its course with the finality lies with the judge/(s). From his own incompetence, Zaid Ibrahim has proven that it is the deception by ass-licking politicians and hypocritical judges and lawyers making unsubstantiated claims that smeared the judiciaryit. The judicial system is generally fine.

My comment on Rocky Bru's posting is edited and reproduced to dispell some of these inconclusive doubt creating conspiracy theories and let the the due process take its course.

Putting up the picture of Saiful next to someone from TPM's office at TPM's office is a great fodder for conspiracy theories and throwing doubts, but it is not conclusive to assume of linkage.

In the picture, Saiful don't look comfortable in those ties. Could the picture be taken in one of his visits to Ministers' office as student leader? 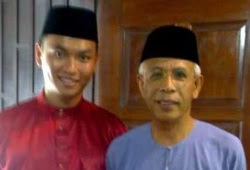 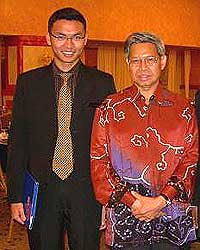 So he is an eager beaver who loves taking photos. Its not conclusive to claim he is Najib's or anyone's stooge in Anwar's office. In fact, what about the possibility Saiful is Anwar's stooge in thsoe Minister's office?

Wan Azizah claimed that they do not have sufficient information on the background of Saiful. She said he was a volunter from the recent GE12 and taken by Anwar as assistant to replace Nik Nazmi.

Its not easy to swallow Wan Azizah's excuse. Anwar can't be that reckless. Furthermore, Wan Azizah and Nurul Izah are no just fillial wife and daughter but they are also politicians. They now know how to twist and turn words.

For a fact, Anwar's former assitance, now ADUN Seri Setia and political Secretary to Selangor Menteri Besar, Nik Nazmi has friends in the Tingkat 4. Can it be assumed he is a stooge of Tingkat 4 in PKR?

Predictably in such a situation involving a politician and more so in the case of Anwar Ibrahim, there will be a psywar at work. They are blaming Barisan Nasional and UMNO conspiracy game. So it is not Tun this time.

Does Abdullah have the aptitude and guts to cook up such conspiracy?

Running to the Embassy of an American stooge what Anwar is doing running to the Turkish Embassy would easily have scare off Abdullah.

It won't look right for Anwar to go to the American, British, Singaporean or any quai lo embassies. It will raise more conspiracies on Anwar.

Other than that, there are six probable reasons to dispell the notion that Abdullah is behind it.

One, Abdullah set up the two MCOBA buddy judges to help Anwar free. In actual fact, there is no more legal recourse after Federal Court dismissed the case.Abdullah was reluctant to carry Dr Mahathir's baggage. WIll he want to create another?

Two, it is confirmed that Khairy was in communication with Ezam to help Anwar get his medical treatment. Remember the passport delivery?

Three, Abdullah and Anwar had a close cordial relationship. It is glaringly obvious that Anwar never attack Abdullah hard. His excuse was of family ties.

Four, it is stupid and unreal to use the same conspiracy trick again, if there had been one in the first place. It would be stupid to do a predictable conspiracy. Moreover, it is proven to have back fired in the past. Abdullah would not risk it with his shaky political situation. In fact, could be Anwar's conspiracy as the impetus to public sentiment support to get MPs to crossover.

Five, Anwar and Abdullah has mutual interest. Anwar has privately expressed interest to return to UMNO. No news reported any annoucement of his PKR membership. Anwar is a convenient ally for Abdullah to ward off challenges on his leadership. In fact, Anwar and Abdullah's Tingkat 4 has common agenda, both not liked by Malay Nationalist.

Six, there are those in the know of cooperation between Anwar and Abdullah on matter other than politics.

Believing only few of the above is sufficient to say that it can't be Abdullah.

Will it be possible Najib is trying to set up Anwar since he is viewed as a quite sleepy lion that could be lethal with a moment's jump?

But could he do so without resources at his disposal?

When Anwar was making wild allegations since Ijok's by election, Najib did nothing. He could have made police report for contempt of court or sue him. Indeed, he would have won, but he didn't sue.

So why must he take a riskier option to get someone to "tadah bontot"?! These days anyone can squell or the right price.

Stick to Something Conclusive

Be it Altantunya's murder or Anwar's sodomy police report, stick only to conclusive fact of evidences, motive, and undebatable arguments. Refute any allegatiosn of police abuse or judicial tampering, it is a preemptive excuse for face saving for eventuality.

In short, someone made a police report and it will be investigated. If there is sufficient evidence, it will be brought to the court. Let the court decide!

Zaid Ibrahim and RC has not proven conclusively that the judiciary system is wrong, even for teh case of Tun Salleh Abas. Only people is wrong - judges and lawyers. Nevertheless, the judiciary has sufficent mechanism for appeal as long as it is based on fact and not cooked-up doubt creating conspiracy.

The troubling thing now is why Anwar is no more in his "berani kerana benar" self but looking more "takut kerana salah"?

Doubt there are threat on his life to warrant him to hide in the Turkish Embassy. Fear from the from staunch Reformasi people perhaps?
at 6/30/2008 10:05:00 AM

Just would like to add that Anwar was not really 100% free of his sodomy conviction because the Federal Court did find evidence of the sodomy. The Court did not prefer to convict Anwar based merely on ONE man's evidence. That' all. The sodomy conviction was overturned by the Federal Cpourt based on technical consideration. Anwar should have asked the Court to expunge "the sodomy evidence". He didnt!! He cannot INSIST that he was MORALLY innocent from the sodomy charge!!

Rite on d spot,..heheh..wat can I say..(",) I believe if we take into account our logics den I wud say bro Saiful is planted to spy on BN's camp as it woz definitely b4 PRU12.. if he is a spy to BN planted in bro AnWar's camp wud he have exposed himself as he has been in d company of BN leaders such as Azalina, Shahrir n Tok Pa.. my take is he is planted by AnWar to gather info & of coz he returned to AnWar's camp wth info b4 pru12.. Bro AnWar noes he is in a big problem wth his lush for 'Wrong Entrance' & he is scared stiff as he did not expect bro Saiful to make a police report.. what push bro Saiful to make a police report, well i gess since he got engaged he dusn't want 2 b buggered anymore but bro Anwar insist n d rest is history.. even a women who is forced indirectly to hav sex wth d boss for promotion wud hav reported to d police dat she was rape if she is getting married & d boss insist on f.....g her.. sumtime our conscience had d better of us...wat can I say..anothr theory n like u said conspiracy theory.. I wud never trust bro AnWar, not now not ever...(,")

hopefully everything will b back to normal, heheh..

"The masses have never thirsted after truth. Whoever can supply them with illusions is easily their master; whoever attempts to destroy their illusions is always their victim".
Gustave Le Bon (1841-1931);"The Crowd"

"You're not to be so blind with patriotism that you can't face reality. Wrong is wrong, no matter who does it or says it."
~ Malcolm X

Letting the time pass me by said...

This new story will give me another puzzling questions... is there any truth in it? The last time we heard about the case, the judges believe that it can happen but the only thing is that the evidence is not concrete enough to put it beyond reasonable doubt...

Can't see why is it so surprising or scandalous about a former student leader/activist having taken some pictures at places where such a former student leader/activist would go. It is too apparently stupid that the government would cook up this one, why risk the court of public opinion again after Anwar emerged from the one 10 years ago somewhat a hero?

The way I look at it is that Najib is the main victim. Already all the fingers are pointing to him.

What worse could happen? After 2-3 days, upon police investigation, they claim that the allegation was a fabrication (though I doubt they will reveal the real motive of the fabrication). Then a public opinion would be created and you know who would indeed carry all the baggages.

The image of Anwar will be boosted and his political enemy will be casted to doom.