Some say it is too hasty. It's as though there was no consideration for the plight of the people. The disruptive impact on the economy seemed not even pondered.

The country can afford to give subsidy. If price increase need be done, it could have been done gradually. The rising oil price is not just after the GE but have been happening for two years.

Unlike the handling of the currency crisis in 1997/98, the Government did not exhaust all avenues to avoid the pain on the people. The Government seemed to not make an extra mile to creatively address the problem. Together with the oil hike, electricity tariff hike was also announced.

Don't try to downplay like what TV3 did to say oil increases happened during the last administration. The Finance Minister did not handle the situation and intentionally delayed marginal increases for sake of politics!

The long and short of it, everyone is unhappy. 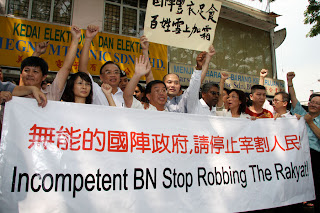 "Despite the small number of actual protestors, they managed to attract a large number of curious onlookers from among the business owners and passers-by thronging the vicinity, which clogged up the narrow but popular thoroughfare."

One on-looker reportedly commented, "We never said they (the government) shouldn't increase the price. We're a civilised society so don't tell us stories. You inform the people, they understand. Don't create a panic."

Remiser Kumar said "that what the Government had done by its last-minute announcement was create a panic buying situation last night as economic-minded Malaysians rushed out to buy the last of the "cheap" petrol".

Still no clear from pressure for a disciplinary enquiry on im, Mukhriz holds no barred. On Astro Awani, Mukhriz said below:

He complained how could the surprise hike be done in such quantum and without much consultation with many parties to reduce it's devastating impact.

This are the reactions that Dato Ahmad Talib gathered from the street:

In his blog that attracted comments more than 600 already to-date, Dr Mahathir said:

The cost of living must go up. Put another way, there will be inflation and the standard of living will go down.

When Tun mentioned the currency crisis, the action by Government, from the day Abdullah became Prime Minister till to-date, turn subservient to revert back to the International Monetary Fund (IMF) crisis prescription.

The thrust of Datin Dr Wan Azizah critcism of the Prime Minister was his inability to manage the economy.

Malaysia Insider reported her view that "the government could have lowered the pump price if it taxed profits made by oil companies". Furthermore, "the cost of exploration by oil companies was US$30 but the price of crude oil per barrel was US$130".

The Government should not have made comparison with Thailand and Singapore but with The Emirates where pump prices is at RM1.19 to Malaysia's RM2.30.

It seems political consideration was least in the Cabinet's discussion and much concern were on availability of fund to finance development.

The big story on Abdullah's development plan is no more RMK 9, the magic wand that was promoted with such pomp and pageanty that it could solve all economic woes, but the economic corridors.

With questionable issues shrouding the economic corridors, particularly WPI and NCER, how will Government answer allegation that the people are squeezed poor for the sake of some quick buck artistes? Isn't the road to instant richness lead to Khairy and his Tingkat 4 friends?

Will rebate solve the woes? Is it not till August? Why are foreigners now allowed back to buy our subsidized oil? Or we wait for another flip flop?

I extract a bit from this post for A Total Blog, thank you. Your blog link is preserved.

That is a really comprehensive "oil reaction" that I really enjoyed reading. But surely there must be some positive observations too? Or are you just concentrating on the negatives of it all instead.

On another note, to neutralize situations, what do you think of this person's point of view? Interesting eh. http://malaysiabebas.blogspot.com/2008/06/harga-minyak-memang-patut-naik.html

even if PR take over, there is no guarantee this issue will be solved. not sure that they can do what they promised. they should propose what they have in mind to counter this problem rather than just talk and ask for vote. if it is doable that it will be great. what about for those who already given out their vote? better present the solution than encouraging people to join demonstration. prove that u r really concern about malaysian..

I fail to see anything positive out of an oil, electricity and basic food hike. Care to tell me?

There is nothing unique about Anis Ahmad Abdul Rahman's view. It is just a pro-free market believer's view.

Free market without intervention will translate to a more efficient distribution of resources, achieve competitiveness, etc. Like any economic conclusion, we should watch out and scrutinise the assumptions made.

People like Anis believe that subsidies, social cost, welfare contributions, and other intervention of the free market mechanism are distortion and waste. Let him find his utopia.

As a former professional in the freeist of all market, that line of thought is hogwash. I've lived in the world's most "free market" economy and sitting neck to neck with prosperity are street dwellers. This is the world according to Milton Friedman and many of the Reagonomics supply sider proponent and they can all kiss my ass.

Nevertheless, in any discussion of economics, there is no right and wrong answer. It depends on what one's objective and what is the nearest that can fulfill.

My priority is to see an independent, and thriving Malaysia with narrowing disparity among Malaysians, be it according to race or state or social class or whatever.

I want to live in nation inhabited by humans and not human resources. I want to live on earth with the beauty of its human imperfection and inefficiency, but it has a heart beating.

Shouldn't I be considered a postive thinker?

hello voice, prolly (one) good reason for oil hike is to be a lesson for us malaysians that we have to really appreciate our petrol resources (which i read somewhere is going to run out by 2013?) The real issue right now perhaps is to explore other means of energy because we aint having the petrol forever. So by high prices, perhaps it would make malaysians rethink their oil usage before. Good for environment also what. The whole world is so dependent with oil, what happend when all the oil runs out??

That saying, no more jets for our ministers too of course.

I dunno about 2018 (not 2013 ... which is next PRU) coz Murphy Oil struck a major finding off the coast of Sabah and ever wonder why BN so eager takeover K'tan this time around.

Compared to the temperate and big industrial countries, Malaysian are not big consumer of energy. Correspondingly, we do not waste as much.

Environmental pollution in this country is not so much due to energy related pollution.

The problesm you've raised is more relevant and finger shd be pointed to big business.

Nevertheless the need for energy conservation is valid. MOSTi and our University are doing work on alternative energy. A Malaysian used to head such Asean body based in jalarta some 10 years ago.

Wyy we do not see such major effort? Maybe we are not directly involce in such work. Maybe political will for it is not there. I am sure or business and industrial community's selfish kiasu attitude is not excluded. It is not much the common people problem.

You may feel we need a shock treatment but should the change be one with a debilitating impact on the social, political, and economic senario of the nation and the people?

So do we need to penalise the common innocent people to deny them of subsidy?

Subsidy is a way for the country to share the benefit of it's prosperity. I thought we are much better off today then we are decades ago. Thats what our politicans ahve been saying.