A Trader's Hunch on the Recent Petrol Oil Hike 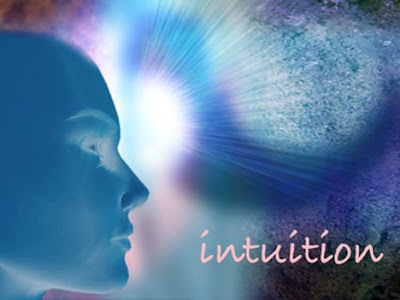 The manner the recent petrol hike led this ex-trader blogger to believe that it is NOT merely about Government’s budgetary constraint and uncertainty in the world oil market.

Dr Mahathir commented about the need to reduce subsidy after the 1999 oil rise to US$30 per barrel. Analyst report predicting oil at US$100 per barrel has reached this ex trader’s as early as 2005!

Petronas is supposed to make further revelation next week. These days it is acting in it’s manner as a full-fledged corporation to maximise shareholder’s value. The new mantra of Government companies.

Taken all the rationale, excuses and spins, this ex-trader’s hunch or intuition is that the recent decision is actually the incompetence and complacency of Abdullah’s economic management.

This adminsitration procrastinate and flip flop in their decisions. By the time, Abdullah actually decided to do anything, his decision is usually too late and not in control. Personal political plans supercede the people, party and national interest.

And, underlying the recent hike is an insidious intention to IMF the economy. 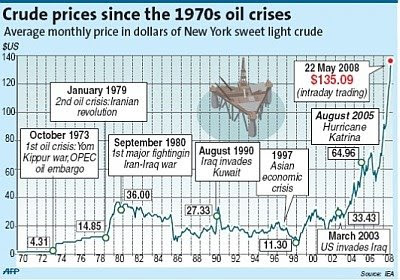 By looking one go at The Star Online chart above, one could observe that crude oil prices is determined by the supply and demand factor and also global politico-economic event.

In a recent talk by YBM Tengku Razaleigh at Taman Melawati over the weekend, he revealed that oil was at one time controlled by the six and later seven sisters oil companies, which are owned by politicians. Although state oil companies have exert their presence, the geo-global political dimension remains.

One major shareholder of Haliburton is Vice President, Dick Cheney. For the sake of Haliburton, America went to war in Iraq and killed one million Iraqi. And, the present oil run-up is viewed as a US power game against China for the control of the Pacific Ocean.

Looking at it from a market perspective, the present state of pandemonioum seemed obvious. It is somewhat an amplified version of the situation in the years of 1976-80. The event that spark the rally was the 1979 Iranian revolution and the present major event preceeding the current rally is the year 2000 US invasion of Iraq.

The paper presented a clear signal that the world was facing up a situation where World Excess Production Capacity (WEPC) was at a dangerous low level. By refering to the chart below, events that brought down WEPC in 1973, and 1979 led to sharp oil increases.

The oil rally that test the US$30 per barrel ceiling had it’s root in the lengthy occurance of a low WEPT from 1991-1998. The sharp rise in 1998-2000 brought about Dr Mahathir’s comment on petrol subsidy.

It was the declining capacity from 2000 to 2003 that sparked the present rally that busted through the US$30 and US$60 per barrel. At around 2005/06, this blogger received alarming prediction of oil to reach US$100 per barrel.

Will not such important literature be secured by Petronas? Is Petronas not aware of the situation and trend then? Aren’t our Govrnment policymaker not alerted of the situation?

Returning back to The Star Online chart, the early 1980 sharp rise is followed by a stable declining price all the way to 1996. Will it be after the oil rally that oil prices has touched the maximum and market will automatically come down?

Forget about the doomsday commentator saying oil price will reach US$250 per barrel. When the US$100 per barrel prediction came in, no one believed it. People are typically most bullish at the top and bearish at the bottom.

If a logarithm scale is used for the y-axis, it could reveal a toppish market. It is near the peak that one hear talk of excessive speculations. Could a rally drive prices more than 10 fold in one go from the US$20 to US$200 per barrel level?

Ponder what Idris Jala said regarding the absence of oil tankers at sea not moving and no long queue at petrol stations to show no shortages. He pointed out that analysts are ramping the market and presented the fair value of crude oil at US$40 per barrel.

Lets do a close up of the present rally. 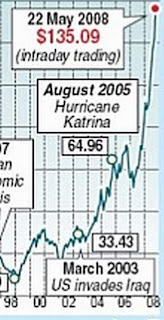 The chart (on the right) revealed that the extraordinary run-up in oil prices occurs during Abdullah’s administration.

However, the geo-global situation and implication in early 2000 at just around the US invasion of Iraq was quite within the grasp of Dr Mahathir. He made the comment on oil subsidy and the decision for Petronas venture abroad.

It is likely that some study had been conducted and some energy plan put in place. Back then, a Malaysian ITM lecturer headed the Asean energy research centre based in Jakarta. Isn’t it around mid to late 1990s that Petronas went on its overseas exploration?

What I am driving at is that Abdullah-led Government procrastinated! And, his actions to the oil rise is sheer pathetic. If he had been a trader, he would have been considered a novice and put on leash from conducting trade independently.

To be fair to Abdullah, he did adjust the price of petrol bit by bit. From this Abdullah’s era fuel hike history chart below, he acted in accordance with the market with the 30 sen hike coming about at the US$60 per barrel in 2006. But was he consistent?

From early 2006 to middle 2007 where he did nothing when oil prices was busting new highs. The decision to move away from gradual adjustment to refrain from rising petrol prices was purely political and personal!

He was obviously steadfast to his plan of positioning the UMNO party election in 2008 after purging his political competitors through the General Election. Despite the poor sentiment against him personally, he insist on holding a snap election at a time his popularity is in it’s low ebb. He delayed the oil hike to win the General Election.

By the time, he made the oil hike recently, it was a hefty rise that has a devastating impact on the economy. Even how Dato Shahrir tries to persuade, it is impossible to believe that prices will not be affected.

Inflation is expected to be high and this will have the immediate of substantially reducing the people’s purchasing power. It will have an impact on the economy’s productivity and also income. A reduce income affect standard of living and development of the nation.

Now it is revealed that Abdullah did not fulfilled his promised programs made to soften the blow from the 2006's 30 sen oil hike.

Besides political consideration taking precedence over sound management of the economy, Abdullah's adminsitration was not proactive to spot a given trend when price busted through a key US$60 per barrel ceiling level and with fundamental backing.

By the time he reacted with a policy, it is a case of too late. In fact, this former trader's intuition says that his decision is wrongly timed. A novice trader’s mistake of acting in panic to buy and cut loss at market top!

Abdullah had no short-term, medium term and long term solution. In fact, he was giving recycled standard statements! It is equally odd that he provide rebates, and all sort of new programs but remain steadfast with the sharp oil hike. One you ruin the economy, counter measures is laggard. It should hve been for a more manageable smaller increase.

What about the foreign and smuggling eating up our subsidies and big consumption by industries and IPPS? Can't consumers be saved from it?

He should have learned from the wisdom in Dr Mahathir’s handling of the 1997/98 financial crisis. One should never make a major decision at any extreme state of emotion – happy or anger, pessimistic or coinfident, and fear or greed - for it will overwhelm sound judgement and screws up ones rational decision making ability.

Blogger Kick de Fella displayed these charts below and there are pertinent issue here. 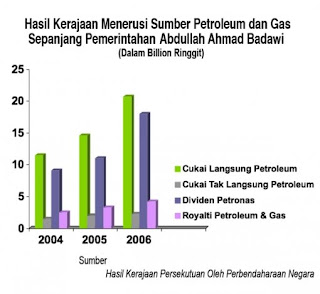 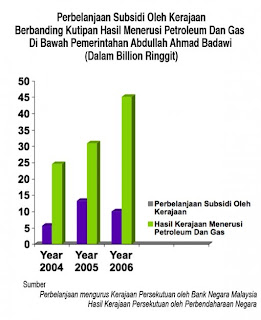 Government is enjoying a rise in income and the subsidies are comparatively peanuts. Whats the beef with Government? Or it is Hasan worrying about his job and he needs to be in sync with the current mindset of for purely financial return taking precedence over social programs?

One observation that escape many eyes in the midst of the furor of oil hike was the decision made initially by Shahrir was for the total removal of subsidy in August.

To a free market economist, subsidy create inefficiencies in the economy and blah blah about competitveness, wastage and market determined mechanism to hold supreme. But subsidy can be described as the country sharing its wealth with the people. Isn’t market mechanism that result in durian being cheap in Muar during season there?

Can’t subsidy be seen from the perspective of incentive?

One big plus being control on the economic drivers.

The removal of oil subsidy has the same impact had we subscribed to the IMF policies in 1997/98. The economy will shrink as is expected to happen from the announced cut in public sector spending, private sector investment and consumer spending. Interest rate could be forced to increase to curb inflation. Subsequently, unemployment will rise and the improving living standard negated.

The poor economic condition will not encourage investment by the private sector and some will end up investing abroad. FDI is on the decline for years under the Abdullah's adminstration. Don’t tell us Iskandar brought in FDI when 50% of the pledges are not fulfilled.

Developed country seriously defend inflation to the hilt because of its impact on the living standard of it’s people. George Bush Senior used to say, “The American lifestyle is non negotiable.”

The policy change that he instituted was poorly timed and too shocking to be absorbed by the system. Abdullah has taken an irreversible major structural decision which has a devastating impact. Does he know it?
at 6/19/2008 02:39:00 PM