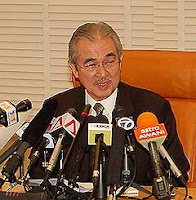 PUTRAJAYA, Malaysia, June 4 (Reuters) - Malaysia announced on Wednesday a broad overhaul of its energy price system, sharply raising fuel and gas prices but taxing palm oil and power producers in a move that would drive inflation to a 10-year high.

Petrol prices would rise 41% (78 sen higher) to 2.70 ringgit a litre and diesel 63 percent to 2.58 ringgit from Thursday, Abdullah said, in a reform that would eventually lift Asia's second-cheapest pump prices to market rates.

Power distributor Tenaga Nasional's tariffs would go up by as much 26 percent while the price of gas supplied by state oil firm Petronas to the power sector would be more than doubled, he said.

"We try our best," Abdullah told reporters in the country's administrative capital near Kuala Lumpur...

Abdullah doesn’t seem to understand many things, does he? It is not the best of effort. He lied, insensitive and his policy suspicious. 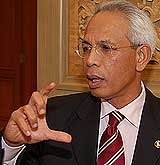 In the recent General Election, people can still remember the Prime Minister denied he is dissolving Parliament and actually dissolved it the next day.

Yesterday, the mainstream newspapers put up headlines that fuel prices would be up in August. Shahrir, in is usual twisted of talking, can the fine print in the report is consistent in saying it is fuel subsidy that would be totally withdrawn in August.

By midnight last night, oil prices were raised by a hefty 78 sen and when the words leaked in the evening, there was a mad rush for the petrol stations.

People Still Can’t Get It 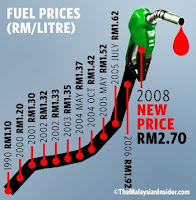 The fact that international oil prices have been on the rise has not gone unnoticed by the people. No one really believed Anwar’s General Election claim that he could reduce oil prices by 10 sen.

For the common people, it is illogical that we can’t continue to have cheap oil. Malaysia may have the one of the lowest in the region but comparing to the other oil producing nations, we have the highest! The comparative prices were circulating by SMS throughout the General Election campaign.

With subsidy about to be totally withdrawn, it is unthinkable for the common people for us to not benefit from cheaper oil and be paying international market price meant for oil importing nations!

The immediate issue that clings in the mind of many now is that Abdullah said and repeatedly said that we can’t afford a higher subsidy. It seems he claim, which reluctantly have to be taken in good faith, subsidy has taken up a third of expenditure.

Remember that he said the money is needed for development.

Malaysia is a net oil exporter and earns 250 million ringgit a year in revenue for every $1 rise in crude prices. Petronas is making extraordinary unexpected profits in the multibillions. Last year alone, was in the tune of RM70-80 billion, compared what it used to be RM10-20 billion.

Anwar’s argument that the Government can afford it makes sense to the common people.

How are we to dispute his simplistic logic that went well with the common people that the people are made to suffer for sake of development that only benefits the few?

Since oil revenue are extraordinary or out of the normal profit, Government can’t depend on it to be included in their development budget.

Pak Lah announced economic corridors in the billions, trillions and gazillions, knowing so well we do not have that kind of money.

With everything channeled to and through GLCs, which the normal businessmen aren’t accessible and only the Tingkat 4 linked project brokers are able to, how are the UMNO party people to defend against Anwar’s allegation?

A Matter of Accounting

Subsidy or no subsidy, it is a matter of accounting. We can retain cheap fuel for the consumers without having to resort to subsidy at all.

With the technology today, there is no more the striking oil by sheer luck any more. Exploration cost can be controlled and technology has enable to reduce the probability of missing

In one trip to Dungun, this blogger was told that in the oil business, payback period does not wait for years, even six months is unusually long. That is the reason, time is the essence and cost is immaterial in the oil & gas supply support business.

The cost of oil is actually next to nothing, after all it is god given for Malaysia. We can have cheap oil. Thus, why is it sinful for the people to directly benefit from cheap oil prices?

Think about this, while the people are to suffer from expensive oil, the export driven industries and IPPs have been making billions from preferential fuel prices. The beneficiaries are the foreign shareholders of these PLCs, foreign providers of good and services, fat cat billionaire-shareholders, and GLC power brokers.

Is that fair and just, Accountant Amir-shame?

Alas, the government already pretty much decided that it will use global market rates for fuel in August.

The manner the oil hike is handled is very careless.

The political economic structure of this country is dependent on these subsidies to share the benefit of the bounty with the people. Inflation is kept and controlled at minimal to ensure rising prices do not cancel out the growth achieved

It a foregone conclusion that the hike in energy - fuel and electricity, and basic food prices – cooking oil, rice, sugar and flour, will have a devastating impact and at its worst a possible runaway inflation.

Inflation this year could be between 4% and 5%, the highest rate since 5.3 percent in 1998. Inflation last year was 2 percent. By the end of the year, interest rates will raise.

Shahrir had earlier said the fuel subsidy would cost the government as much as 56 billion ringgit this year based on current crude oil prices, or about a third of government expenditure in 2008.

Let’s not talk of the devastation of this new reform policy based free market approach, but just ponder with everything about meeting up to global benchmark and market, will we still have control on the direction of our economy?

If you could appreciate that the answer is no, beyond the cancelled crooked bridge, fall of Pulau Batu Puteh, WPI, strategic military manouvre, etc, this is another hegemonic policy of neo-colonialism.

And, it is masked beautifully under such jargons like free market, market determined, global competitiveness, efficiency, risk to return, quantifiable return on social policies, etc.


Geez, such incompetence! Can we have a truly qualified Finance Ministers, not Economic Faculty reject and gambler of colossal losses? A Domestic Trade and Consumer Affair Minister that is merely a good talking burung tiung, but turn out to be a disaster when given responsibility.

This is just not about politics, the people need to have confidence in the ability of its leader to communicate, creatively handle problems and soften the blow to the people.
at 6/05/2008 09:27:00 AM

Well, it is not the best of effort as yet.. but do we have a choice? Or are we sensing a fearful, dark, bleak, and narrow path that stands in our way? Of course not. Mankind is known for its ability to solve problems that besets them. Or don't you realise that we are now on the verge of a new era..a new dawn in history. The focus now is not 'them' but we as 'an individual' that can make things happen.

Hi blog owner. This topic is everywhere eh? All I can say is, Pak Lah certainly not intending to be likeable in deciding this, moreover wanting to win over the public. But i'm waiting to see how exactly the subsidy resturucturing plan is going to be and decide then on whether it's bollocks or actually makes sense.

well what can I say. What I read in the news today the statement Abdullah made "I'M NOT DOING THIS TO BE POPULAR!". lol. Indeed, he *is* actually making himself popular, but maybe not for the most desirable reasons. such guts i'll say.

Petrol hike? Aiyoh, it was to be expected so I guess I already expected it so, what the hell still have to deal with it leh

Mukhriz made press statement saying this is not a smart move. It should have been done in stages and not done abruptly. Its killing businesses and commerce.

For all I know now is that my family, my pocket, my bank account and I are all doomed!