Don't cry for him ... Robert Phang 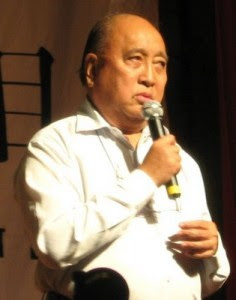 What song you wanna sing, Uncle Loh-Bird?
The Malay has saying, "Siapa makan cili, dia rasa pedas." We do not need to translate that do we?

George Bush used to say in a presidential debate, "If you can't stand the heat, you get out of the kitchen."

This is what exactly happened today.

Tan Sri Robert Phang announced his resignation from the MACC Committee on Prevention. He cited all sort of conspiracy theories and speculation which his spin masters will further elaborate and add colour.

This is to give him face. Do give him his last words.

i wanna hv some fun. please tell me more about this uncle. Those anwarista already support uncle. Im also want to support this uncle ma.

Tell us more about our uncle ya?

Strip the bastards naked bro. Show the link all the way from LoBert to Ramli to Raja Petra to Anwar Ibrahim. Mampus depa.

see how naughty malaysian chronicle is linking the "exposure" on Phang to his calls on MAS investigations.

didn't gani explain to the committee the allegations and his explanation was accepted.

i don't understand phang's role in MACC. he was advisor and he was attacking MACC. he was never protecting the integrity of MACC and now he has quit to protect HIS INTEGRITY and that of MACC????

What will Din Merican say now?

Now that Tricky-Bobby is out, its about the crusade to go after Ramli Yusuf & Rosli Dahlan.

You & other this band of 'elite bloggers' should finish them once & for all.

This is definitely an elite forces work!

They(PR) want a clean Malaysia and so do us the voters.

So why not strip it all the way regardless who they are.

it's not about fun but integrity - your integrity.

the cavalry make a sudden change of their target as the leader seems got confuse with himself, after rerun and rerun of his own conspiracy.

All the way to Tombstone boys.

If you bow at all, bow low.

and my words to dato' or datuk din

If you dig a hole for someone else, you might fall into it.

"Innocent until proven guilty" is the maxim that should always be carefully observed especially when it involves a hearsay case like this (at least at this stage).

But, I couldn't help to believe the allegation leveled against Robert as exposed by you. Please release more convincing facts or any further circumstantial evidence to corroborate your accusation A Voice. Better still, lodge a formal report to the police or the MACC.

Your intention to get rid off this kind of culprit is highly commendable, but what good would it brings if there's no action taken?

What happen to SC Zarinah now after your series of revelation against her, her hubby and Nor Yakcop? Nothing?

agree with almost all of the other commenters, why stop divulging info now. If you really have the juice, dont just stop for the sake of that person leaving the post. Whatever ewalth and influence he has accumulated over the year, if it came from unlawful or naughty means, then, make sure we'll strip that off of them also-lah. So, dont just stop here. Let's go all the way.

Haha another good one coming! One girl recently was taken to court for releasing accounts statements belonging to one customer and eventually came into the hands of robert and robert published them in the internet. We heard that it was robert who engaged a private inveatigator company to obtain financial background of this bank customer. Dirty old man la robert.

He has better principles than the rest of the guys at MACC. You could not tackle the issues he brought out so go and hit below the belt. Spread a RUMOR that he tried to bribe a senior govt servant. Where is the proof? None to be seen .While there has been so many documents posted to link the AG and ex IGP and TR in countless shenanigans the MACC chooses to close one eye and at times both eyes , ears and mouth .Maybe he saw the true nature of the guys at MACC and had enough of it.He got out to save himself.

Investigations take time. What is crucial here is the fact that bloggers like A Voice and others encourage a culture of whistleblowing.

That in itself is a GOOD start. Whether appropriate penalties will actually follow up, is another matter. It has NEVER been easy to catch crooks red-handed.

Motivated bloggers have SAVED IJN from privatisation. That is an achievement. Bloggers have also played a role in sleepyhead stepping down.

So here's KUDOS to patriotic bloggers. They have their hearts in the right place. Keep up the active citizenry.