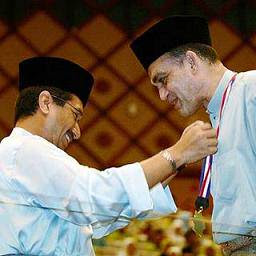 It was meant to dispel allegations made by Straits Times Singapore that Tan Sri Syed Mokhtar is facing with a debt problem of RM25 billion, in which RM21 billion of borrowing is by MMC.

Having been in the corporate world before, negative news or rumours usually emanate from Singapore, especially those to ridicule Bumiputera corporate businessmen.

It is like a coordinated effort within and without the country to stem any gains in Bumiputera economic empowerment.

In our recent posting here and here, we have partly question the accepted myth of Tan Sri Tajuddin Ramli losing RM8 billion at Malaysian Airlines System Berhad (MAS). Along the way, we learnt the need to stem rumours before it is assumed as undisputable truth.

This blog pursue to investigate the Malaysia Today's MAS story and found many untrue claims and dark sides of this concerted effort to ridicule the ACA, MACC, Attorney General and former Inspector General of Police.

Until such time, let us debunk this myth of Syed Mokhtar’s RM25 billion debt.

The market talk of Syed Mokhtar sitting on a mountain of debt has been making it’s round for quite a number of years. Part of the reason that Syed Mokhtar have been pursuing, taking on and taking over endless list of strategic assets.

This opens him to jealousy and negative speculations. More so that he is a Bumiputera businessman that is supposed to stereotypically fail and expected to be inferior to Chinese.

Not only he has to face up to Singapore newsmen and analysts, he has to deal with the Tingkat 4-linked Khazanah people who looks at him with much disdain. It is heard that the RM25 billion debt figure came from Khazanah people.

Their close association with Singapore is an open secret with Nor Yakcop's hand pretty much in Khazanah affair. Nor Yakcop is a long close associate of Tun Abdullah's cabal, Dato Kalimullah.

Syed Mokhtar is no close allies. The first act of Tun Abdullah when he assumed premiership was to cancel the strategic double tracking project meant to be awarded to Syed Mokhtar. There were many other project reviews, cancellations and postponements after that.

There is talk that when he submitted the proposed buyout of PLUS last year, Khazanah changed UEM's plans and decided to give it to EPF. The finality is yet in sight.

With Bumiputera like this, one do not need other races to sabotage Bumiputera businessmen.

Let’s look at MMC. Is there such size of debt?

MMC is one of Malaysia’s largest conglomerates with leading positions in transport & logistics, energy & utilities and engineering & construction. They own the Port of Tanjung Pelepas (PTP), Johor Port and Senai Airport.

MMC was recently awarded the role of Project Delivery Partner for the development of the RM36 billion urban mass rapid transit project for Kuala Lumpur.

Through Aliran Resources, MMC is expanding abroad to the Middle East into water treatment plant Saudi Arabia, Algeria, and Jordan. If our memory has not fail us, Syed Mokhtar’s group controls Air Johor Berhad.

Syed Mokhtar had strategic presence in basic food like rice, sugar and flour. An area the Chinese wish to strategically hold a monopoly. They claimed he was bidding for the RRI land in Sungai Buloh.

In early December 2010, his name turn up for the 32% stake in Pos Malaysia up for sale by Khazanah and it ties very well with his other logistic and supply chain businesses. Read Rocky Bru's here.

Many would have suspected and speculated that Syed Mokhtar and MMC have high gearing. Is it really so?

Since MMC is the largest of Syed Mokhtar’s vehicle, let us take a look at it.

The manner Syed Moktar structure his loans is that debt are contained at the operating subsidiary level. So does with MMC.

These subsidiaries have sufficient cashflow to comfortably cover their respective debt service requirements. Most debts have been secured on a non-recourse basis. 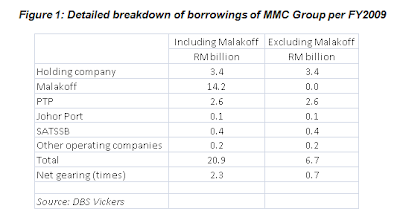 This is not to telling to ignore Malakoff. Again, like his other operating subsidiaries, Malakoff debt is standalone tied with the energy concession.

MMC have been receiving dividends from its subsidiaries and associates. The third quarter dividend for 2009 was RM189.3 million and 2010 was RM204.25 million which increase the ability to repay its loans.

MMC has options to pare down debt at the holding company level by RM3.57 billion.

Finally, the interest cover and gearing ratio is at fairly comfortable level. See figure 2 below:

All Syed Moktar need to do is to explain for his other smaller corporate vehicles like Tradewind, Bernas, DRB Hicom, and etc.

Is it a debt problem or racially or politically related corporate sabotage?

If there is no such jealousy or conspiracy, this is something observers need to understand. Most analysts and business reporters suffer from looking at the obvious and visible, thus for the pessimistically inclined view.

Most businessmen have a trick at their sleeve. The real key to their success is usually hidden and not openly known.

As a hint, all that is done by Syed Mokhtar is amal jariah and national service. Some speculate it as to realise Tun Mahathir's dream.

AB... thanks for the explanation.

Anonymous said...
This comment has been removed by a blog administrator.
10:13 AM

ACTUALLY, the ones who are jealous bout Syed Mokthar are the Malay businessman themselves and not the chinese. He normally JV's with them ect Gamuda Bhd.

I think you are not Malay to call Malay idiot. I will delete your hostile comment

Let me ask you then why do you not make noise about Ananda holding many strategic asset?

Why no chinese make a fuzz about when vincent tan, wiliam cheng and late loy are levergaed and diversed to the hilt?

It is all a hate Malay thing!!!

Selagi Syed Mokhtar bernyawa banyak zakat kepada fakir miskin terbayar dan nasib fakir miskin juga terbela. The bottom line is if he does his job well and he succeed, well I guess we the malays and the government should support Syed Mokhtar 120%,

It doesn't remove the elephant from the room: the massive debts. All is well so far as Syed gets government kontreks and the economy is good. But one downturn and we will see MMC go down like Renong in the 90s.

All this accusation of Singapore & Chinese conspiracy is just red herring to distract from the real issue.