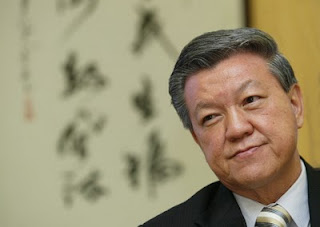 When UMNO Deputy President Tan Sri Muhyiddin Yassin expressed his wish to see such majority, when he announced the candidate for BN last week, there were more out of confidence for the solid Malay votes of about 47%.

To achieve a majority of 5,000, that is equivalent to one third majority for the nearly 15,000 voters, Malay votes will not be enough. Chinese make-up about 39% of voters and Indian about 12%.

There is hardly any issue of significance but the big hurdle lies with MCA.

The win is assured but BN needs to see a significant increase in majority from the 2008 tsunami of 2,492. Otherwise, there is no sufficient momentum to call for a General Election that is likely to coincide with the Sarawak State General Election.

Without the late Dato Sulaiman Taha as Division Head, the UMNO Division seemed to be struggling to get their act together.

The Johor Menteri Besar, Dato Gani Osman who is Election Director and acting Division head for a while is not grasping his role to direct the Division's election machinery.

Gani initially boasted that the machinery of the State UMNO involving the Divisions is strong enough but later realised he needs help from outside. The other state UMNO machinery is only beginning to trickle in.

Gani made a paranoid decision to sidelined all the local UMNO wings and that gave the impression that Wanita and Pemuda boycotted the by-election.

The problem has got little to do with so-called sabotage by the 15 in the candidate list rejected by UMNO leadership.

Being a traditional UMNO state, they will be able to ward off attack on Felda and hold on to the Malay block.

On the Indian side, only PPP seemed to be consistently involve with the Indian voters. The local MIC is as good as dysfunctional, but claim to represent Indian interest in the area.

The voters spoke of issues that is more to do with the employer and need to be addressed at national level. But the real problem is allocation and assistance tak turun. There is likelihood there is leakage and voters needs are sidelined to party members needs.

This is the source of dissatisfaction in the community and should have been addressed long ago, the least before the by-election.

The competition between the three Indian political parties of MIC, PPP and IPF is not making things simple. During this campaign, Makkal Sakti party is divided into two camps - supporting BN is the faction leading the party and supporting Pakatan is the faction of the past president.

Despite MIC's Murugiah triggered Interlok issue that had been manipulated by once unsupportive opposition in Tenang, the majority Indian support remain for BN. There are Indian anti MIC but volunteering for BN in the campaign effort.

The Chinese is the tricky bit here.

As a traditional MCA area, one would have thought Chinese support would remain to save face for MCA. The current MCA President Dato Dr Chua Soi Lek was the former Parliamentarian for Labis and his replacement is his own son.

Soi Lek had been doing pre-election visits to traditional local power brokers and Chinese schools. His son has been acknowledged as a hard working MP. Early commitment points to a more than 5,000 majority.

But little is known that Soi Lek has problems with local popular boy but send outside to Bekok as State Assemblyman, Tan Kok Hong.

Talk is he does not get along with Tan and had banned him from coming to campaign for the Tenang by-election. And he is a member of the Johor exco capable of addressing localised issues!

The MCA branch has problems facing up to their weakness.

In the local BN meeting, BN became sensitive when UMNO merely mentioned of the need to work together to regain three peti undi area.

By mentioning the losing balloting areas, Soi Lek took it that UMNO was blaming MCA for the losses in Chinese votes.

Few weeks before the nomination, one MCA blogger described the by-election as about "Chua Soi Lek versus Chua Soi Lek."

The Soi Lek of the present seem to rear an ugly head to criticism, honest feedback and indenial.

It is heard from an MCA source that Soi Lek became hypersensitive and blamed local UMNO as "bawak mulut" when PM advised him to work harder.

If only Soi Lek knew where and who have been giving the feedback, he would have give that advise a lot more respect. It is unfair to blame UMNO when work have been carved out clearly - UMNO handle the Malay voters and MCA handle Chinese.

In that arrangement, Soi Lek will sulk if he knew UMNO is lending a hand, not even wooing directly Chinese voters.

The ceramah held by DAP started with a couple of people as audience but last night had grown to few hundred. If Soi Lek continues with his egoistic attitude, it could lead to the repeat of Sibu where it culminate into a mega political gathering never seen before.

In the meanwhile, UMNO Youth made a mistake to disturb Lim Guan Eng ceramah in Felda Chemplak by spewing racist remark and slogan. These are fodder for opposition spin masters to broadcast nationwide.

This is what Soi Lek fear most. At the lower ranks, UMNO has not changed and they do not understand the changing perspective of political correctness.

UMNO must not take the issue raised by Mazlan Aliman for granted. Despite the weakness of his profile and fact and figure, he is expressing the perception of the Felda Second and Third Generation of the Felda management.

With Felda communication and propaganda weak under Tan Sri Yusof Nor, it is a matter of time Mazlan Aliman will gain more inroad with Felda. [A Voice is still holding on to issues on Felda.]

Back to Soi Lek, the biggest fear for Soi Lek should be that support and campaign for BN from within the Chinese community are coming from NGOs and they insist that MCA are not invited for their program.

MCA has only done one political program to date. The number Pakatan's assembly without police permit is already 17.

Unless Soi Lek buck up and stop sulking, this by-election could be similar to Waterloo is to Napolean. but it is not Soi Lek's Waterloo but MCA's Waterloo.

It only goes to show that BN is becoming irrelevant as more people get to know about the current leaders of BN components. Time for BN to change it's ways.
Pak Tua

MCA and Gerakan take orders from DAP.An open secret.Afterall there are no difference amongst them.Its a matter of time,soon they will become one.

The UMNO hired guns spewing racist remarks at DAP last night at FELDA will make the Chinese voters sympathize with DAP.
Soi Lek can only do so much when UMNO is still playing the Melayu vs Chinese game

Majority of 5,000? This is democracy. Even if you win by ONE vote, it is still a win. Morale be damned.

As for Soi Lek, it's our own fault. He is just doing his job, whatever that is.

MCA got blogger so sharp? Sure or not... try read even MCA troopers twits can vomit ady.

Very much a prompt reply :)