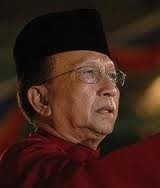 Rais denied the charges yesterday. It's all over today's newspaper and yesterdays blogs.

Suddenly all knives are up against Rocky and presumably Big Dog. Suddenly the onus to provide proof is sent back to Rocky.

How shallow can some reactions be? It is as shallow as when the news broke and every other person accused Rais when it was just one side of a report.

Yo man! Chill out!

When did Rocky and Bigdog revealed Rais as the Minister?

Those who assumed it to be Rais in the first place should be the one laid with the burden of proof. The same burden should be on those who displayed picture of a young woman and claiming her as the amah.

No it is not her. She's middle aged.

Rocky, who had to be in Singapore to attend the funeral of his cousin yesterday, immediately responded to these shallow minds. Read here.

Why did Rais took 13 days to respond since Rocky's first posting here and 8 days from Bigdog's expose of MigrantCARE Report here?

There is one rumour heard for the reason behind his long silence but the point is Rais expressed willingness to be investigated. That was what Rocky and Bigdog raised on December 28th 2010.

If he is willing, he doesn't have to be spiteful to say:

"The opposition and those unhappy with the success and people's acceptance of the policy are resorting to stifle it through libel and cheap lies. They hope they can achieve their evil intention by killing the messenger," (Rais) said. -- Malaysiakini

This got nothing to do with whatever success or policy he meant. Who cares?

What an attitude. Hope Najib leave him out of the next cabinet reshuffle. Just a rumour heard.

No need to lobby and drama, Khairy. Aren't you quiting?

It looks like Rais have not learnt any lesson in humility and adamantly remain arrogant. This is the same attitude that got him in trouble with bloggers in the first place.

He went out with much vengence after Rocky and Bigdog for basically firing a warning shot with a subtle message to ask his son stop getting involved in telco deals.

But instead, he decided to clamp on the messenger of that message. He made a police report, directed MCMC to commence investigation not in accordance with procedure, and subject two bloggers with inconveniences.

Did Rais ever wonder who was the sender of those message?

If some bloggers claimed Rocky was being personal and vengeful, ask back: Who started it in the first place? At least Rocky is objective and not as emotional as a sotong like Rais.

To those bloggers defending Rais, they have not been thinking and shallow in their reactions. Before any bloggers jump, be thankful I didn't call anyone stupid.

All made factual mistake for jumping into conclusion without looking at the chronology of event properly. They resorted to presumptions and cheap name calling arguments.

Aiyeahh ... howla you people wanna defend the Government and be psywar strategist when you all only know how to wayang but poor on fact?

Did anyone bother to ask and delve into who is Alex Ong, the Country Director of MigrantCARE?

Anyone bother to research the international links of MigrantCARE. Are you'll to tell me that no one was curious when Tenaganita had this story way back in 2007/2008?

Who is Alex Ong associated to? Does he have link with any opposition political group?

Don't expect me to lend a hand when the Minister did zalim on my innocent friends. But I did ask a blogger to give another side to the story.

Their paymaster may not be getting their money worth helping them financially.

But can't blame them because Rais have not been doing his job. His many Ketua Pengarah have not or more accurately could not do their job since their job is tail Rais like an honourable warlords.

Forget about the pro-Government bloggers, even the mainstream media are left unguided without a solid communication strategy and tactic. This story will have a life of it's own and I bet these Ketua Pengarahs have no idea how to stem the spread.

If they do not ekor Rais ke sana sini, they are deemed as not showing reverance to him. Rais is so hypersenstive that he will blast them for the mistake of not walking immediately behind him or surpassed him in the entourage or not being there to receive him out of his car.

Or that was how hypersensitive, vindictive and feudal he was in his younger days as Menteri Besar of Negeri Sembilan.

Don't worry Rais, your stories from that era is safe. It is as good as buried in the grave of Dato Taha and silently peaceful as the Felda plantations in Negeri Sembilan.

I guess its a lesson for everyone. Dont believe everything you read!

Couldn't have said it better. A million doggie licks in appreciation for standing up to the Penghulu and his loyal obese pet.

who dare to eat sambal belacan, he need to 'tahan pedasnyer'... no need to blame other people who not together with u...

It is obvious that this 'elite' group of bloggers who had 'broadened' this clearly defamatory campaign on Rais just wanted their efforts to be picked up by the minister and subsequently take a life of its own.

When he lets it be, they would unhesitatingly paint a picture of cowardice that points to admission of sorts, and if he had reacted from the outset, he would, invariably, be seen as admitting the same. And so, yesterday he finally came up with a statement - an act that not surprisingly would put the wheel into motion. The bloggers and their cohorts jumped in joy, for they had wanted the minister to do this.

They got the reaction they wanted.

Perhaps, Rais would know where rocky and his compatriots stand in the context of a defamatory statement being carried by a third party, deliberately or inadvertently.

As far as many are concerned inadvertence does not come into play here as the 'messenger' the bloggers as they would like to call themselves would have known the harm and damage it may cause the minister on the first instance.

To argue in court, one could go beneath the veneer or veil that cloaks the blogger's position. By amplying the issue with a mere question and eliciting comments that sometimes are blatant, is the blogger not doing something wrong?

Not as shallow as the way you blinking idiots try to do a person in.

I have something to say to those shallow minded bloggers,

Get your priority right!

If gonna do mind reading and claim what you think is rights must be right, let me do the same too.

It seemed clear to me that you intend to blow this issue to hide Rais's sins.

At the slightest hint of his wrongdoings Rais made police report and abuse his executive power to victimise bloggers.

It turn out this bloggers were not lying. Rais's son is in court and being sued. Where was Rocky wrong????

I reckon you are a lawyer. Proof your allegations and not just mind reading.

Please talk for yourself and don't claim you speak for all Melayus!

My God BigDog, you are enjoing this and want more. You are a true worrior my friend.