After 30 years, the Saga continues 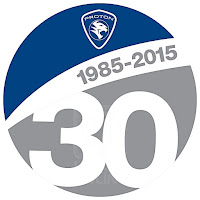 It was an effort by Tun Dr Mahathir to bring Malaysia towards being an industrialissed country. He practically copied the Japanese, Korean and German industrialisation development model.

There are 14 car producing countries in the world but Malaysia is the only developing country. Proton maybe struggling with its sales now but it is something to be proud off.

Off late, Proton became a target by TV3 to counter attack Tun Dr Mahathir's political attack on Dato Najib. Doubt it is the work of professional media people in TV3 or Media Prima or PMO but one ild school minded Back Op operator. It was an irresponsible, unscrupulous and hare-brained effort when a Black Op at work is publicly known.

Differences in opinion or power struggle is one thing but policies and legacies should not be made collateral damages. If not, the country and rakyat could be made sacrifice for any person's ambition too.

For Proton, being caught in the political crossfire is not the first barrier in it's development. On the hindsight, it seemed appropriate that the first Proton model was called Saga. After 30 years, the Proton's Saga model continues.

From the start, there was opposition to the idea of a national car.

That opposition even culminated into a challenge to topple the UMNO party president and Prime Minister in April 1987.

Proton was one of the issue used to justify the challenge. Till today, both Tengku Razaleigh and Tun Musa Hitam remained steadfast in their view of Proton. They insisted Proton has not achieved the economic objective it set itself for because it was not an achievable objective from the beginning.

They had then simplify Proton as merely an assembling plant for Mitsubishi but given favourable tax incentive.

One reason seldom mentioned openly but their boys would do so in private was that the Proton proposal came from one Taiwanese by the name of Rin Kin Mei that was rejected by many other countries. Naturally, they viewed Proton served to only enrich him.

There is some truth to the allegation but not the whole truth. Clearly, such view is pessimistic, lack the far sightedness and wisdom.

There is a Malay saying. "Kalau tak dipecahkan ruyung, manakan dapat sagunya." If one do not start somewhere, you will not get the benefit from such effort.

Great economic powerhouses of today became one they are because they dare to venture to make that bold step, work and perservere till it succeed. One has to do to be able to learn - be it methodically through good strategy and planning or via trial and error - to build and develop anything.

Through thick and thin, Proton built itself up from only the capability to provide body frame to the first Saga till the first truly National Car rolled out the plant in 2003. The model was Proton Waja and it was the model that used the first Malaysian made engine.

That is something the foreign car makers doing assembling do not contribute to the Malaysian economy and progress.

Today, Proton is not just about it's 11,000 workforce but to use Dato Najib's seldom used term, it is an eco-system that has 77,000 employees, vendors and distributors, within and without Malaysia.

With only 800 engineers, Proton have developed technologies and own IP on some 2,900 patents. Not bad compared to car companies like VW which have something like 15,000 engineers. 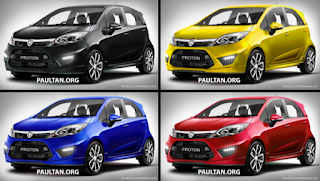 It is too bad that Proton's latest model is not selling like hot cake. By right, it should.

Unknown to many, the 2015 launched Iriz model was a car that combined European design, German technology and Japanese reliability but yet Malaysian price.

That brings us to the latest problem of Proton. In the past few months their accumulated internal problems have translated into major drop in sales. It plummeted from 10,000 the year before to 5,000. For the first time, Proton fell from their usual top selling car maker in Malaysia to third behind Perodua and Honda.

The current management team under Tan Sri Syed Mokhtar is working hard to address lots of legacy issues with the vendor system, distributorship, etc. The experience of DRB-Hicom as car assembler to few foreign brand of cars brought into Proton the exposure and experience to address past legacy problems in order to put the company in better footing.

Already in the pipeline are 3 new upgrade models for Saga, Perdana and Persona. Read about it in Bigdogdotcom's here as he gives a historical journey of Proton.

Part of the predicament of Proton today had it's roots in the insidious attempt by the past administration to "destroy" Proton. It happened under Khazanah ownership and their nominated CEO and Executive Chairman, Dato Azlan Hashim.

That was the time Proton sold of MV Agusta for cheaps. The buyer sold one third of the company for millions. The believe was someone had eyed the land of the Shah Alam plant. Progress was intentionally stunted. The company was not developing technologies and churning out "badging" models.

Unable to yet turnaround another company or operationally develop any investee company, Khazanah sold off Proton to Syed Mokhtar after unethically and by right, illegally orchestrate to jack the stock prices.

Early under Dato Najib's administration, he introduced R&D rebate in one of the annual budget presentation in Parliament to encourage companies to undertake R&D. Proton had done lots of R&D. Over 5 years, their claims for rebate had accumulated to about RM1.7 billion, not RM2 billion. MIDA sent auditors to verify their R&D spending.

Another issue used to bring down Proton was the grouses with the Teksi Malaysia program or TEKS1M. The allegation was Proton failed to deliver but the other side to the story was SPAD did not stood their ground and stick to their plans, but secede to the demand of taxi drivers.

SPAD planned to face out the current taxis and upgrade taxis into a better and improved quality vehicles. They gave the specs and Proton agreed. They spent time and money to ready themselves for  3,000 such vehicle.

When it was time to deliver, taxi protest for the higher price and SPAD did not hold their ground. They asked Proton to remove many of the installed specs and went about town and TV3 saying Proton did not deliver in time.

Taxi driver obviously are reluctant to pay more so they complained that some of the fittings are unnecessary. They wanted to be given other choices of vehicle. Latest heard Toyota will offer their Innova but at prices RM15,000 higher than Proton.

SPAD people may have their side of the story. Leave their comment and appreciate they abide by code of conducts set.

Part of the rejection by Taxis drivers is the negative view they have of Malaysian products. Generally, Malaysians still have remnants of colonised mind as they seemed over awe with orang putih and too overly critical of anything Malaysian.

Such negative attitude could be laden with racist stereotyping. Just because lots of Melayu are employed, products like Proton and MAS are look at cynically and seldom are unfairly cast aside as inferior.

For 30 years forward, Proton should prepare themselves to be more independent as in less dependent on government help. Government coffer is limited and should be directed more for the welfare of the rakyat.

Seldom is the case, assistance given to corporations only serve to line-up the pockets of tycoons than  the socio-economic role it is supposed to do. Their CSR are seldom mere white wash. Cases in point are the IPPs tycoon like YTL's Tan Sri Franscis Yeoh and Ananda Krishnan.

Rakyat have become weary of corporations including GLCs and SLCs and view them as merely opportunistic keparat. Part of the reason behind 1MDB's effort  to restructure the RM100 billion a year subsidy guzzler IPP industry was appealing.

Tun M is not wrong to say that Proton cannot compete and jobs will be lost if Proton is not given some form of preferential treatment or protection. With AFTA already within sight, it is not a reasonable expectation and the realistic way forward is to work and persevere.

However, MAI is not right in their believe that open market is the answer to develop local auto industry.

It could have been better and honest had they say Proton and other national cars should not be complacent. They need to be more serious in their business development to develop market competive products and venture abroad.

Tuan Madani of MAI's statement in The Edge sometime back lack the far sightedness. His insidious opportunistic intention was obvious when he said the national automotive industry's direction as planned under the NAP 2014 was to have more non-national car.

In that respect, Proton have made an important tie-up with Japanese 3rd largest auto manufacturer, Suzuki and the deal is very flexible than past venture with other technology partners.

In countries like South Korea, the government fund research and development. South Korean are so nationalistic that they will only buy Korean cars. That is how they made it instead of the ever sceptical and pessimistic Malaysians and government.

This is not making accusations on the government or Proton management or rakyat attitude or politicians' and their scorch earth game but the reality of today.

Things have changed, the world have changed and Proton cannot keep relying on Tun M's political back-up for survival. The 90 year old, whose birthday is tomorrow, will eventually move on. It is also time for a serious national reflection on where we should be heading as nation. The "other" side are embracing change but some of "us" are holding on to the past.

It is also time to realise that a nation is judged on how it takes care of the less fortunate over the well endowed. And, a nation economic program must have the benefit of the rakyat in mind and not just to serve the limited interest of capitalist and non-human corporations without faces and soul.

/// There are 14 car producing countries in the world but Malaysia is the only developing country. ///

Proud to have ours eventhough it is imperfect...only can find perfection at the other side of it

HEy VOICE mGF BUMmer,sorry to digress from your BLOg topic, you execute DESi K! IN My latest post, I have a special request: "
DESIDERATA: ALL THE highlights, in RED THUS ,ARE done by YL, aka DESI, knottyaSsusual.
Wit' reference to this line: ****He also is a friend of Mr. Najib’s stepson,
DESi adds that if not mistaken, this Stepson was involved in the production of a multi-million-dollar movie titled WOlves at WAll STreet. Maybe DR MAhathir had the privilege of viewing this said movie, describing its as "PORNOGRAPHIC". I WIll try to askk my UMNO-BUMMER, THE VOICE, knot MIDnight, to influence leading BLOGGER Chedet for a special screening for us Members of B.U.M!