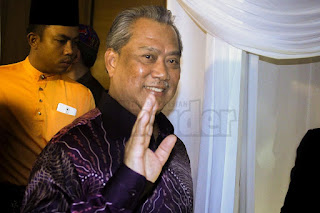 The big story will be the dropping of Tan Sri Muhyiddin. There is already voices equating it with past dropping of Tun Musa Hitam and Dato Seri Anwar Ibrahim. One such voice is Cilisos website here. One can read Muhyiddin's press conference yesterday in the Mole here.

By evening, there was a big hurrah in the social media over a viral video of Muhyiddin in conversation with Tan Sri Kadir Sheikh Fadzir and Dato Mukriz Mahathir. Frankly, what was said in the 53 second clipping was not anything new and consistent with myriad of sources but there is more than just that.

Those looking towards Muhyiddin as the end-game of to their struggle should have heeded our June posting, Muhyiddin is not an end-game. They have themselves to blame for setting him up.

Other than Muhyiddin's sacking, there were many interesting observations and chats on the new cabinet. Missing is the observation that the new cabinet is filled with Tun Abdullah's people. Was it to teach Tun Dr Mahathir a lesson? 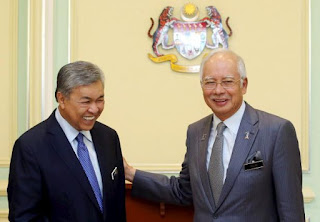 One immediate accusation by the critical observer is that cabinet reshuffle was a 1MDB cover-up. Four members of PAC was appointed Deputy Ministers and together with new appointments for positions of Attorney General, it was presumed as interfering and delaying the investigation on 1MDB.

As of yesterday morning, viral in the social media were new blogs exposing wrongdoing of Tan Sri Zeti's husband and call for her resignation. Also mentioned were Dato Shukri of MACC.

There is a blog posting reporting on investigation on few personalities for alleged leakages by Special Branch. Since when do SB do criminal investigation?

Quite sure there will be those speculating that yesterday's fire at Bukit Aman was attempt to destroy evidence.

So much for rumours.

Nothing serious also, we would like to make passing comment on the new cabinet. Nothing in depth and serious, just comments over Nasi Lemak and Kopi O:

Finance Minister portfolio remained with Dato Najib. Been hoping he relinquish the MOF position to someone. It's quite a burdensome position.

Was thinking it would have been better to bring in Dato Wahid Omar as MOF II and Dato Husni Hanazlah do something more suitable to him like taking charge of EPU take.

The talk of Dato Ahmad Zahid to be appointed Deputy PM over Dato Hishamuddin have been making it's round but the timing is a surprise.

It would have been a better choice to have lawyer like Dato Wan Junaidi as Zahid's Deputy in the Home Ministry. Maybe the purpose is different this time.

With many police and security personnel around, Home Minister could be the right place to freeze Nurjazlan's loud mouth shut.

Just kidding. It's just not about 1MDB, ok?

At the PM's Office, one see the return of Dato Azalina Md Said.

Sure she is tainted but by next election, one can see the return of Ronnie Liew. Hopefully she has repented from her past ways.

She is one of the former PAC member. Heard to have strong views. Can share her view with Dato Nazri. Learn something from him. Puteri lifeless.

Dato Hishamuddin should be moved on to other strategic positions to prepare him for the future.

Only change is transfer of Datuk Johari Baharum from PMO as new Deputy. One of two Kedah MB Dato Mukhriz's political nightmare moved up.

The role of trade must be bigger that a Minister II position created for Datuk Ong Ka Chuan. His brother Dato Ong Ka Ting had a role as Special Ambassador to China. Maybe it is related.

Enough said of Mat Maslan but he used to be Tok Pa's political secretary. It's him returning to old boss. Some speculated him to go to Multimedia and Communication or Rural Ministry.

With Muhyiddin leaving, Education is split back into two - Education and Higher Learning.

The former Cikgu and former Kedah MB's promotion will be the bigger political headache for Dato Mukhriz. Viral last night is picture of Dato Ahmad Lebai Sudin with Najib. Is he new MB?

P Kamalanathan becomes Deputy, up one notch from Deputy 2.

Agriculture see Dato Ahmad Shabery Cheek taken away from his second stinct as Multimedia and Communication to Agriculture. Let see kampong boy from Kemaman do something for the rakyat.

He will get guidance from Dato Tajuddin Rahman. Will he?

Should have replaced this old school old timer but there is political requirement.

Rural and Regional Development goes to Dato Ismail Sabri. Carries with him experience from KPDNKK and Agriculture. Hope he repair the mess by Shafie. Having spent billions, believed RM7 billion, why are rural folks infrastructure still in a mess?

Could he keep Bera seat for next GE?

MOSTI got a new Minister from Sabah. Dato Wilfred Madius Tangau rose to full Ministership from just a backbencher earlier. A member of the PAC.

Seriously need to beef up this Ministry. R&D funding needed to propel industries which create technology, improve competitiveness, and create jobs. Read back past posting on Proton here to know of promised R&D fund not disbursed.

It's for the better. Higher education has different priorities than secondary schools.

Same people at Youth and Sports. Buck up KJ. The results are not impressive or some say hardly there.

What happen to those raids on diesel smuggling? Are they being charged???!!!!

Good man. Sacrifice much for PBB. Land for PBB office in Kuching was donated by him. Great debater in Parliamant for the front bench side.

His Deputy is Datuk Hamim Samuri. Transfered from MITI.

Communication and Multimedia gets a surprise new Minister in newly sweared in Senator, Dato Seri Salleh Said Keruak. Salleh resigned from his position as Speaker in Sabah. Used to be Sabah CM for a bit too short a time during the rotation era.

Anyone wants to be Minister, open up a blog. Anyyway, word of caution: Careful of Sofia Jane [read here and here] and Mohid [read here] in MCMC.

Heard this is only phase 1 in beefing up Najib's administration team. Some will say it is Najib's saving his arse. Everyone is entitled to an opinion - be it an intelligent one or simplistic conspirational one.

There will be more phases to come and quite radical moves. There is no stopping.

Remember when everybody was complaining of Najib as having no balls. You want balls, now you got it. Lots of it.

Zahid has all the making of a new ghaffar baba. Eventual PM will be Hishamuddin.

najib is a coward, but coward can also do idiotic things when he is desperate. especially when he is so scared that he might no longer can smell fresh air.

how about looking at the numbers, look at the numbers of all the ministers and deputy ministers. can people see that najib is circling himself with apple -polishers and "taat-saya yg menurut perintah" kind of people without value added. You answered it yourself with MOF position plus I will add in Syed Keruak. Do we need so many ministers and deputy ministers? Why we need so many senators ministers, what value that they add on? Pak Lah time was bad, but najib keep making the numbers to be bigger and bigger.

Crap. I agree with a lot of other people believe, this cabinet is "PM cari nyawa cabinet".

these are lots of balls? what balls?
cant see any. replacing one with another requires only two things - few strokes of pen onto a paper, and a taxi ride to the Palace.

i thought you are concern about very bad management of a certain strategic fund with very bad cash flow? sorry cannot mention it now otherwise its dungeon for me. but i figure you get it very fast which fund i was referring to. so these changing of people do affect the on going investigation. so now u have to wait. a wait that is too long already.

dont u feel cheated? that your concern is not seriously taken?

Good to have balls but the cabinet need to be effective.....boleh ke?????

Justice DELAYED is justice denied. Are Najib and Rosmah planning for exit?

Make sure their assets are FROZEN immediately.