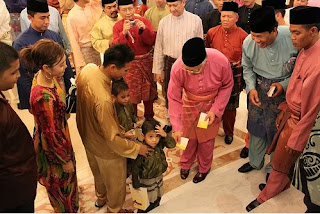 Returned early to our hometown on Tuesday to escape the traffic jam.

That enabled us to visit few elderly relatives. Mostly the old, the ill, the lost loved ones, or the less fortunate. Interestingly, the same questions that kept propping up in conversations was the Low Yat Plaza fracas.

There have been many highly seditious statements made by oppositions, left wing activists and super-liberals against the Malay and Islam's status, rights and practices, but yet it is the perceived racial fracas arising from the stolen handphone that got the Malays' attention.

The Raya festivities is a significant event in the Malaysian calender and it is an important occasion from the perspective of propaganda. If events in the last few days of Ramadhan could dominate the Raya conversation, then it is successful in creating the Hari Raya buzz. 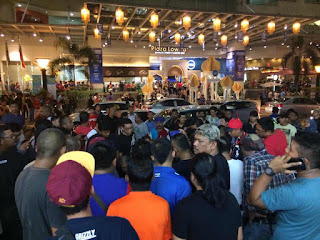 To the law enforcement official, the Low Yat incident was a clear cut case of theft. IGP Tan Sri Khalid blamed the accused of talking to the social media and spreading the version of cheating.

Khalid was trying to control the situation by not mentioning that groups of Malay got agitated when the kid was beaten up by a group of young Chinese salesmen. That resulted in Malay groups converging by the thousands at Low Yat.

There were fracas that resulted in several Chinese media journalist was reported injured. Situation was under control by the wee hours of the morning. To date, 24 were held for investigation and released.

Blogger Papagomo, an UMNO division chief and activist Ali Tinju were held by police and was reported to be charged under the Sedition Act.

This could lead to another discontent as Chinese politicians and media social players were equally guilty of the doing the same alleged seditious act but no police action or prosecution done. Khalid had since given assurance that Chinese and Tamil social media will be investigated.

The lawyer for the openly challenged Khalid's statement as judgemental. He raised issue on the date on the CCTV video and denied the accused spoke to any social media, etc. [read here]. Words are the alleged stolen Lenovo handphone is not available as proof.

Despite being an issue of theft and racial incitation, there are segments in the Malay community that saw it in a positive light.

They claimed it as a unifying factor for "oppressed" Malays. Many were impressed with the viraled claim that the accused to return to the scene of the crime and Malay gangs managed to drive out Chinese gangs in their own territory.

Already Low Yat's business are affected by the incidents and shops closed few days. Social media is calling for boycott till they are out of business. Police raided Low Yat to capture those beating up the accused.

The Chinese retribution could be the buzz for Hari Raya. 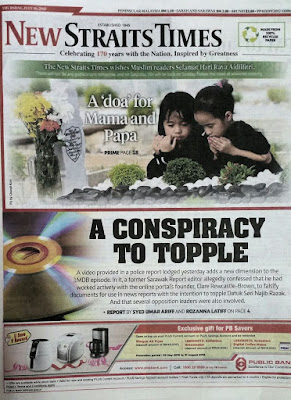 The opposition anticipate the Low Yat incident will be the buzz for Hari Raya and was quick to lay the blame on UMNO.

Bar Council activist, Eric Paulsen accused PM of using Low Yat to detract attention away from 1MDB [read MMO here]. In the joint press conference by the opposition and left wing NGOs, Rafizi warned 1MDB issue will not go away by this incident.

PAC is due to meet in early August. The past and present CEOs, Dato Shahrol, Arul Kanda and Dato Hazem are due to appear on the 4th, 5th and 6th. After the sessions with Auditors, PAC claimed to have found few issues to raise to the CEOs.

The Auditor General (AG) submitted their interim reports. Minister of Finance II, Dato Husni Hanazlah pointed out that the report concluded there were no missing RM42 billion and the transfer of USD700 million to a certain individual. [read Rocky Bru's here].

The said individual is presumably Jho Loh and allegedly done via Good Star Limited. 1MDB have clarified and it was repeated several times in the blogs with documents that Good Star is a subsidiary of Petrosaudi and not owned or controlled by Jho Loh.

Some bloggers like SatdD, Jebat Must Die and Freddie Kevin inferred the USD700 million is linked to the alleged campaign fund that was deposited into Dato Najib's three personal account with Ambank and is the diverted invested fund into Petrosaudi.

Their reaction generally arise from lost of trust with government for the late clarifications and several inconsistencies between the statements and claims by Ministers with certain claimed documents or other statements.

Thus far, Taskforce have frozen six accounts but said none belongs to Najib. There is no specific statement on the alleged Dato Najib's account except that it is closed. When was it closed? Does it tally with the dates of the transfers as alleged by WSJ?

As far as the documents revealed by WSJ, CEO of CIMB Islamic, Badlisyah Abdul Gani questioaned the discrepencies with the Swiftcode thus deemed the documents as questionable. Sarawak Report (SR) responded by diverting attention on Datin Seri Rosmah.

Badlisyah had announced his resignation [read here] in the midst of rumours that Dato Nazir Tun Razak had approached the G18 PAS-offshoot group [read here]. It re-affirm Nazir's long believed political aspirations, biasness and undemocratic tendency to personal opinion by others' than himself.

Question remain as to the existence of large sum of money allegedly transferred into Najib personal accounts.

One source with linked to a certain Minister claimed no such transfer and accounts existed. It will eventually be revealed. While one source linked to a government outfit claimed it's existence, but unthinkable for source to be trusting of SR, The Edge, and WSJ.

Only few days ago, the NGO, CAGM made a press statement of an unnamed SD by an ex-Ambank staff claimed of being force to effect the alleged transfer [read FMT here]. Yesterday, CAGM denied the SD and said it is only experiment on Malaysians gullibility [read here].

Will the experiment take the heat of Dato Najib? Lim Sian See see the walls are closing in on Najib's critics [read here].

The silent buzz in certain circles are forecasting the resumption of onslaught by Tun Dr Mahathir after Raya. The new target deadline to bring down Najib has shifted from end of June to August.

New allegation surfaced in Australia by The Age on allegation of counterfeit money. Najib made a statement to sue. At least, he is fast on this. 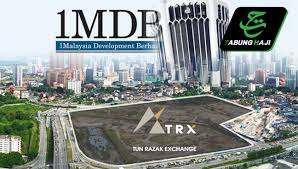 A certain blogger attempted to revive the Tabung Haji-1MDB issue through his blog and maybe other avenues too. [Read Apanama here and FMT here.]

Whether 1MDB was a case of swindling of a mega preportion, his attempt to create a viral of distrust among gullible depositers towards TH has bad intention written all over. It will create the undesired impact of destabilising and at the worst of situation, destroy an important Islamic institution through lies and deception.

The posting is devoid of any facts on the subject matter and shows a clear lack of understanding on any non-political issues. The fact as taken from Bigdog here is that the land purchase was made on a discounted valuation, far cheaper than a nearby last done transaction.

TH bought the KLFID land at RM188.5 million as compared to international valuers figure of RM194 million. The land is not sold yet despite receiving several offers. There have been suggestions by MPs to not sell the land.

The decision will be based on long-term benefit to depositors and not some myopic and anarchic political play. The choice is between a one-off RM5.5 million profit versus developing the land for potential profit estimated at RM177.5 million over 3 years.

On the issue of halal or haram, someone unschooled in Islamic jurisprudence has no legitimacy to judge. Buying and selling of the said KLIFD land or any land transaction are halal in Islam.

TH has got decades of experience in property investment and are far more conversant on halal or haram matter in protecting their 8.6 million depositors than politics-only blogger. In comparison to other institutions, TH have the most stringent halaalan toyyiba criteria.

Certainly, depositors' money cannot be simplistically assumed as bailing out 1MDB. The evaluation and negotiation of the KLIFD proposal was made since 2013 and undergone several level of committees' scrutiny. The leakage at the level of BOD and certain evaluation committee have been detected through the information trail.

Nevertheless, the attempt to create a Hari Raya buzz out of the TH issue is not likely to succeed. There is a bigger political happening in the now defunct Pakatan Rakyat. But, it could not outshine the attention given to issues championed by Tun M.

Looking forward for after Hari Raya.

In the meanwhile, to all readers:

To the non Malays (as they always projecting ) , Malays are the privilege race in this Malay country .

I had much doubt about it .

I would like to wish you Minal Aidil Wal Fa izin. God Blessed.

funny, you always talk about evidence and the need of proof on 1MDB. but melanyi's confession and accusation against Justo's tampered documents are not proven yet. anybody can come forward and say all the thing they want to say but are they credible, let alone the truth.

Melanyi's confession is paid for. and his credibility is in doubt.
Justo e-mail's are accused tampered non other by the same company that was hired by Petro Saudi. another accuser that is paid to do confession by an interested party.

why the need for najib to block SR if he can answer the critics factually. he can't.
even Husni has lied and jump the gun by saying that AG has conclude no wrong doing by 1MDB and no 700m USD money transfered to anybody. How can he said that when the AG put on record to say they have no power to investigate the transfer of money. in this modern time, this kind of lies just make you stupid.

Perception wise: najib got a lot to hide.

Another Brick in the Wall - Nice info

Najib is using his own money or the government's money for raya??

Honestly nothing funny or any need to be cynical. Off course, none has any evidence out. This is all reporting of event from the perpective of propaganda.

There is no substance in political propaganda. It is material to influence common people that are too lazy to get hold of and analyse fact.

Dunno about Husni ... he can talk but his communication skill and understanding of the audience and their expected response is poor.

Unless he is forced to lie, we should give the benefit of the doubt especially since we do not know for certain. Would believe he was merely quoting the conclusion of the Audit General interim report.

Tony Pua disputed by saying there are troubling issue. Hmmm ... Anyone familiar with Auditor should know that no Auditor report goes by without any fault not mention. Should they not be able to find any major fault, they would raise issue of pencils wrongly placed in pen holders.

SO the trouble issue that Tony is raising better be substantive enough and many. He is likely to raise only questionable issues, but not raise issue on matters in support of the conclusion.

Doubt he is honest and fair enough to mention it. Unless he is like a son of police, Cina from the former stronghold of Bintang Tiga, Batu Pahat cannot be trusted.