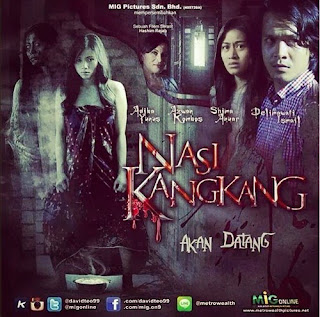 Our June posting on the "nasi kangkang" woman referred to as Sofia Jane became the talk of the agency under the Ministry of Communication and Multimedia (MCM). In conversations and online chat, she is being referred by the code, "#sj".

It has become known to us that Sofia Jane missed the opportunity to serve her marked prey, the Minister Dato Shabery Chik with the prepared incancated "nasi kangkang".

According to Malay folklore, a woman who feeds her husband or male friend or in this case, her prey with "nasi kangkang" can have absolute control over him.

To prepare a "nasi kangkang", all the female need to do is to squat (kang kang), without panties, over a pot of steaming hot rice (nasi) until the steam condenses at her muff and thighs.

The condensed sweat and virginal fluids are then allowed to drip into the pot of rice. The fluids are then mixed thoroughly with the rice and served to the clueless man together with his favorite dishes.

Whether "nasi kangkang" was prepared and served in that manner or it is merely a metaphor, Sofia Jane intend to do anything necessary to get the coveted CEO position that will be created upon the decoupling of the Executive Chairman position.

It makes no different to Sofia Jane that she is not qualified and incapable of fulfilling the role that comes with the position.

It has come to our attention that Sofia Jane was already close for the final kill on her marked prey at a typically wasteful PR event organised by herself guised as something useful for the agency.

She insisted that her accomodation was to be in the same hotel and at the same floor as the Minister.

This instruction placed the Secratariat in a fix as protocol does not allow for anyone in the organisation to be in the same floor as the Minister. To refuse, they will incur the wrath of the man-eater.

Shabery's star must have not co-incided with Sofia Jane's moon at the intended opportunity. Lucky for him but not for her, the Minister's wife decided to come along for the event and share his room.

Reluctantly Sofia Jane had to revert back to the original arrangement to be in the same floor as other staff should.

Otherwise, something as steamy as a "nasi kangkang" during preparation could happen.

Shabery escaped the overture of Sofia Jane this time. Maybe he will not be so lucky the next time.

And Shabery should be be careful. He and Sofia Jane are getting too close for comfort.

They were snapping each other's picture on the smart-phones and playing around with novelty app to create fun cover of 'Playboy' magazine with their picture.

The earlier posting is not exagerating to portray her as a highly ambitious woman who seemed diligent in getting the Chairman and even the Minister to eat out of her paws.

In many people's imagination, they were served "nasi kangkang" that was left to be 'steamed over', presumably together with a cast of spell.

Sofia Jane has limited regulatory, strategic, planning and industry development hands on experience to move further up. For the past 15 years, she was merely globe-trotting and looking prim and pretty being ambassadress to international conferences such as the one in Barcelona every February.

Right from the unceremonious departure of the previous Chairman, she began crafting and charming her way for position upward.

Her "apple-polishing-on-silver-tray", which many in the agency could see, gained her the untimely and quick elevation to the Cluster Chief cohort, with specific new roles, functions and also authority. So they started to coin "#sj" to bitch or refer about her, which is becoming more rampant.

Soon after Sofia Jane charmed and elevated herself into the thought process of the Chairman. She started to wiggle herself smack into the loop of all Chairman's "divide and rule" interpretation of policies and execution of programs.

It is unthinkable of her to do all that when she has he own deliverables.

But then, someone only capable of being a charming host and Guess Relation Officer for the past 15 years wouldn't know head or tail on what to do and how to roll out important work for the regulatory body.

One can expect her to not able to deliver and will naturally be quick to deflect or blame others.

If the role and function at the agency to be de-coupled between the Chairman of the Commission and a Chief Operating Officer, then there might be a serious problem should unqualified personalities are alleviated on the merits of charms, showmanship and superb apple polishing.

The industry is growing very fast. The consumer growth is exponential. The development of technology and availability of content is going towards Infiniti. Under a COO whose limited ability is only to be able to charm everyone with her sweet-talkibility, nothing will ever get accomplished.

Having only a GRO referred as "#sj" to lead his charge will not be of any help to Shabery. Not even if the Minister can show that novelty photo of "#sj" as the 'cover of Playboy magazine'.

As it is, the 'GST-on-top-ups' blunder already indicative of the incoherent between the Minister, Chairman and the "nasi kangkang" woman.

Najib maybe under political pressure. Some say his days can be counted by days and weeks but he intend to soldier on. He is tinkering with the possibility of a new cabinet line-up.

I left the Minstry one year ago. But I know the women who are you referring too.

This write up is like something from africa. Black magic and all that non sense. Raise your game bro. I guess malaysia is really becoming a banana republic

I think I know too.

#sj isn't actually for Sofea Jane, is it?

Better not comment when you dunno what is going on. Should have hold back your fingers.

A dum dum trying to be judgemental and preacher. Story maybe bit sensationalise but have element of truth.

Should have shut your ducking mouth, listen and figure out..Blogger have something to share and you are trying to tell him not to do so.

That's why some felt msia turning to be banana republic. Too many talking yet not knowing much.

People from that organization will definitely know who is SJ after reading the article.


Maybe it is because people know what is happening that make them write their comments here. And I also believed they are SJ colleagues.

After reading the article, I am quite sure that the writer (blogger) was approached by either

Those people that are not happy that SJ try very hard to polish the minister to be the chairman. In the process she created enemies for herself. Her bosses and her colleague that are more qualified than her. Not to mention those she backstab to be on top.

The minister inner circle (Shabbery Cheek own officers). Because they are trying to save their boss from scandal.
Sebab orang dah mula bercakap dan mula buat andaian yang tidak baik terhadap mereka berdua. After all she is a married woman.

Or the two groups join forces.

You must be some of those who believe in magics and stuff. So we cant see eye to eye as you missed my point. Can take the malay out of the kampung but not the kampung from the malay

It's obvious the black magic is just a metaphor and mere embelishment.

It is the issue of incompetence creeping in the organisation and top managememt of mcm and the agency are losing perspective and easily manipulatable.

Somebody should inform or warn Salleh Kruak and his aides about Sofea Jane. It is better the new minister stay away from her

Actually, I'm a western educated white expat and i have seen first hand the effects of black magic, particularly Nasi Kangkang.
It is not ignorance to believe that forces exist beyond scientific provability. It is indeed a shame that 99% of so-called bomohs and mystics are fakes... but that doesn't mean the whole thing is nonsense.
If you believe in any religion at all you could not dismiss black magic as nonsense without being hypocritical.