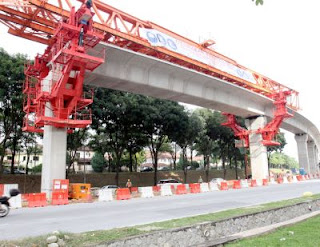 
The LRT Line Extension Project which will involve the extension of RapidKL’s two LRT Lines, namely the Ampang Line and Kelana Jaya Line, is one of the government's nation-building initiatives to enhance and integrate the urban public transportation services –one of the National Key Result Areas, which is a priority under the Government Transformation Program.

Owned and managed by Prasarana Malaysia Berhad, the project’s objective is ultimately to encourage a greater number of public transport commuters raising the modal share from the current 21 percent to 40 percent by year 2030 in line with the target that has been set under the National Land Public Transport Master Plan.

Both lines will pass through some of the most developed and highly populated areas in Klang Valley, connecting at Putra Heights, where an integrated station is developed for the two lines to meet, providing a seamless journey to all commuters.

The portal would want the public to believe the project will look like this picture below: 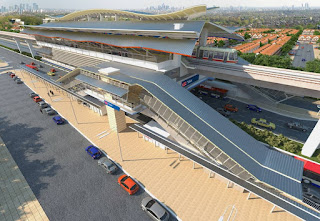 The current situation at the sites tend to be as follows: 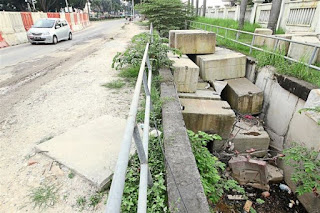 The above picture was taken at Puchong and published in The Star dated January 16, 2015 here.

Civil and systems work awarded in 2011 to contractors are delayed and facing cost over run. Several packages are not completed by the contracted date of 2013 and 2014. Delays have been ranging by 15-28 months. There are reports of bad performance.

One contractor had never done rail work. Coaches to be supplied by the awarded supplier was heard to have problems with one previous client.

For a construction costing RM9 billion, each of the consortiums' combined market capitalisation is not compatible.

One industry source told this blog that Malaysians usually rely on foreign expertise to do systems engineering works and leave the civil and structural, architectural, mechanical and electrical for locals to do.

The setback to hiring a foreigner to assume position as Project Director lies in his inability to handle issues with the local authorities and the public as well as their understanding in the localised history and culture of a particular area.

They are paid very high salaries which is not compatible with locals who could do a better job.

There have been cases of projects managed by foreign parties that failed. The Putra LRT job managed by Bechtel was one example where foreigner fared badly and end up in termination of their services.

One concerned senior engineer confided that the target prices given by construction consortiums to project developer varied widely and it was already indicative of lack of knowledge on rail design. Let alone to optimise the design and manage the work.

He felt the none of the contractors has successfully completed a single inch of system, track and equipment, in particular depot works.

If not done yet, it urgently needs a Project Delivery Partner to oversee the cost, time and quality accountability matters. The project is beseiged with too many issues on safety, health, environmental, and traffic management.

The LRT2 project can currently be described as "the blind leading the blind" with the contractors doing work on "trial and error". This has to stop and problems immediately address before this important NKEA project for greater Kuala Lumpur and Klang Valley turn into a major national disaster.

A PDP with the experience in technical, contractual, commercial and legal could manage work with several contractors and consultants simultaneously. [Read in Wikipedia here]

The senior engineer reiterated that someone with the experience of handling similar project from inception to completion must head the tender evaluation.
at 7/07/2015 10:25:00 AM

So far LRT works done in and around Subang Jaya / USJ are doing fine. There used to be bad roads and potholes but after MPSJ issued stop work orders until the roads were repaired, roads have been repaired accordingly.

The main issue was during the monsoon season in December 2014 when heavy rains led to flash floods around the stations due to inadequate drainage.

Keep it up & can't wait to take the LRT from Subang Jaya to KL for work once its ready!