As Najib camp go #KekalNajib, DAP move in on Putrajaya 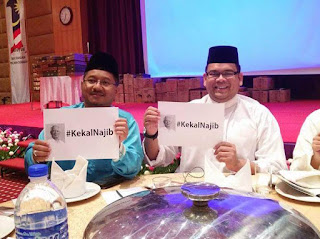 There are doubts and questions raised on the various expose by Wall Street Journal or Sarawak Report or The Edge. CIMB Islamic CEO points to possibilities of fake documents revealed by WSJ.

It still needs Task Force investigators to put the pieces together into a credible case.

In the meanwhile, Tun Dr Mahathir seemed to have laid back in Ramadhan. Tony Pua and Rafizi has tone down.

It is left it to foreign media to do the attack on Dato Najib, wife and political establishment.

Even pro-establishment The Star already showing their pro-opposition fangs in their reporting [read Rocky Bru here].

From the FB postings of Dato Najib's buka puasa with social media last night, the message that will be carried soon will be to #Kekal Najib.

He is fighting back as one source said last night. There will be a counter attack to come.

The issues of 1MDB took a breather subsequent to the arrest of Xavier Justo in Bangkok. The Edge pull up the handbrake when they admitted by saying will stop using any fake e-mail

It was WSJ that managed to resurrect the attack with the allegations of funds transfer into Najib's personal account at Ambank.

WSJ then took the issue to a different direction to reveal what looks like to be compilation of deposit transaction into Datin Seri Rosmah's bank account at Affin Bank.

Her response through her lawyer was to call for investigation into the breach of BAFIA.

Subsequently, Raja Petra leaked names of Bank Negara Malaysia officials allegedly to have leaked the information. RPK could have got the lead on this or he may be just spinning. [Read Rocky Bru here]

Latest from WSJ, they had also resurrect the allegation that money was channeled to Jho Loh's company Good Star Ltd. [Read Unspinners here]

The Edge and SR had been playing this script before Xavier Justo's capture. 1MDB had explained that Good Star is a subsidiary of Petrosaudi.

Can only expect something explosive to happen next week before the long Hari Raya holiday break.

1MDB and WSJ revelations will definitely be the flavour of conversation during the Raya visitions. They may come up with more sensational story to the already spicy flavour.

So the Najib side must come up with more explosive diversion to direct attention to the latest and hottest revelation.

The pro-Tun side could be thinking of something too. Maybe they do not need to do anything.

Tun M may have got Najib where he wanted. He was seen exceptionally happy and jovial at his birthday buka puasa do at Yayasan Kepimpinan Perdana two nights ago.

One blogger attempted as he repeated his favourite theme on Tabung Haji and personal attack against TH Chairman Dato Azeez Raheem without providing anything new.

His obsession is strange and suspicious. Does he has the evil intention to see a public breakdown in confidence with TH and a bank run to erupt? How irresponsible!

But then again, it looks like this episode of exposing and counter exposing is not doing anything good to neither UMNO nor Malay politics.

It has put UMNO and the nation in a serious crisis of confidence which time may not be sufficient to resolve. Tun M could end up being accused of burying his party.

The other Malay political parties are not doing any better. PAS has just undergone a major internal party upheaval.

DAP and submissive PKR have chucked PAS out of Pakatan Rakyat.

What's left is merely formality though Lim Kit Siang had recently mentioned of a possible U turn to still cooperate to face a general election. At the grassroot PAS is still sore with DAP.

The losing faction in PAS have regrouped themselves as G18.

They were supposed to join PASMA and turned the NGO into a political party. There have been a change of heart since interim President Dato Fakhrolrazi wish to remain and be the party President.

Heard G18 have purchsed KITA and is in the process of turning it into Parti Demokratik Islam. Sounds similar to German's Christian Democrat.

PKR is just waiting for the internal fight between Azmin and Datin Seri Dr Wan Azizah to break out. Talk is Azmin is extending hands with both sides of the UMNO divide.

Current thinking among political pundits is UMNO and BN is not expected to win the next general election.

Investigation and due process will take forever. It only entrenched public perception to assume UMNO as guilty without the need to be charged.

Even if investigation turns up empty, it does not make it any easier. Having Najib removed and replaced by Tan Sri Muhyiddin is no assurance either.

With all Malay political parties in turmoil, DAP is tightening their grip on Putrajaya and closing in for the power kill ...

KUALA LUMPUR, July 10 — As allegations over 1Malaysia Development Bhd (1MDB) weigh hard on the ruling Barisan Nasional (BN), a strategist for the federal opposition is already laying out the roadmap for a victory in the next general election.

DAP’s Liew Chin Tong said today that the opposition can ride a “Malay economic tsunami” to take over the federal government with just 38 marginal seats in Peninsular Malaysia if a mere 6 per cent of voters swing away from BN.

“In the Malay economic tsunami that is to come, Umno will be buried in these mixed, semi-urban constituencies,” the DAP national political education director said in his analysis titled “The Peninsula dominoes”.

“Focusing on the middle ground with strong leadership, clarity in policy and a convincing message to unite all ethnic groups while riding on the wave of a brewing Malay revolt could just tilt the balance,” the Kluang MP said, attributing the antipathy among Malay voters to “economic hardships” imposed by the ruling government.

Liew said the battle for the 14th general election due in three years’ time would be in peninsular Malaysia, where 73 of BN’s Election 2013 haul of 88 seats are located.

“Indeed a 6 per cent uniform swing would wipe out 27 marginal seats and send Barisan Nasional to the opposition bench,” the DAP Johor chief said.

He noted that Umno had kept its “safe seat” Rompin in a by-election this May but with a vote share falling by 6 per cent, saying that Umno would lose the 27 seats if the by-election result is used to measure the potential swing in Malay voter support to the opposition.

“If one looks at the states of which the marginal seats are from, apart from the three Parti Keadilan Rakyat seats in Kelantan, which were allegedly lost due to sabotage by local PAS branches, and the seven seats from Kedah, there rest are essentially West Coast Peninsula, semi-urban, multiethnic seats, most of them with a small Malay majority in ethnic composition,” he said.

In Election 2013, BN failed to regain a two-third majority as it won only 133 of the 222 federal seats, while Pakatan Rakyat took 89 seats. A win of 112 seats is needed for a simple majority.

Liew is the mastermind behind a Pakatan Rakyat gamble in Umno stronghold state Johor in Election 2013 that successfully ousted several BN stalwarts, with a haul of five out of 26 federal seats there.

Umno is also facing a crisis due to Tun Dr Mahathir Mohamad’s bid to remove Najib as prime minister over 1MDB and other scandals.

But the federal opposition also has its own troubles after Pakatan Rakyat was declared dead recently while leader Datuk Seri Anwar Ibrahim was sentenced to five years’ jail.

DAP has in the past few years sought to overcome its image as a Chinese-centric party with the influx of new Malay members such as national laureate Datuk A. Samad Said.

DAP ally PAS has yet to come out with a final decision on splitting with it, while PAS progressives have set up a new movement that could well be part of the new opposition line-up.

If Agong is insistent on a Malay PM, an opposition win will still put DAP in the driver seat and holds control over the opposition turned ruling party cabinet.

They could either put a puppet Malay as done in Penang to be PM or even offer one Malay of their own.

Apanama is a patriot who was willing to risk all manner of insult and attacks in order to uncover the lies an deception . Very rare these days in the age when everybody has sold out to RM for RM.

Tabung Haji Chairman said that he will sell the 1mdb land in the shortest time. Now still no go, why is that? His decision to bail out 1 MDB at the worst possible time was what caused the problem, not Apanama. But nowadays we investigate the accuser but let the accused go away.

And where did the edge acknowledge that the emails are fake? If i didnt know better, i'd say you are a liar. Are you?

First thing first, ajib must go ie #kekalNajib@jail, then we strategize pru14. Lest u forget, this present mess was started by the first moron couple no less.

You made him sound so selfless and sincere.

Read in social media he was envious of paul stradlen. Vengeful for being removed from a payroll n enquiry for job not entertained.

you get you facts wrong twice:

1. WSJ didn't reveal about Rosmah account in Affin, SR did.
2. The edge never claim that they acknowledge they used the tampered e-mails.

For pro-najib, please think about this #kekal najib, it is so defensive. just shows that they are not confidence, their morale is already low with the punch from the anti-najib faction.

wonder what LKW is doing. seems he is clueless.