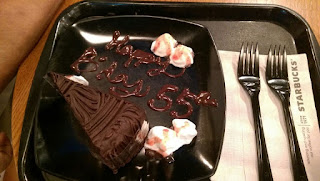 Was too tired with two meetings in the afternoon today in KL and Putrajaya that we fell asleep at mother-in-law's home after breaking fast.

By 11 PM, woke up to return home and end up meeting someone for coffee to confer. And, that was where we got this surprise cake at 12:10 AM July 5th Malaysian time. Co-incidently, it is still July 4th Independence Day USA.

So it's "official". We have now joined our earlier retired peers to be an OAP.

In actual fact, it is not quite official yet because there was a screw-up by the police when late old man registered our birth at the police station. It gives an additional leeway of 4 extra "working" days before entering the official category of an Old Age Pensioner (OAP).

Great, no different than 25, except less vigour physically but no less mentally and intellectually. Thus far, life have been relatively quite fulfilling and exciting. Good family, friends and comrades.

Syukur to Allah that we could reach such mature age. Many close family and friends never reached 55.

These days our wants has not been for much. At one time, the big want was to get a doctoral degree but have long been shelved. Can sustain long hours of reading, and studying.

If there is anything we wish, it would be the modest wish for continued good health, sanity of mind, and great company of family and friends.

Our first order of business as an OAP will be to sort out our EPF. Sorry that there will be less money for PFI financing and development of RRIM land but somebody else's saving could be used for that.

Like the last part , "So,expect a cautious market Monday on expectation of a major stock liquidation by EPF. Mind you, a lot of shares need to get sold to pay our contribution .... a lot, you know ... a lot ... a lot as in ONE LOT! "

Hope , I have the opportunity to withdraw mine in the next 2 years.Just feel worried looking at today circumstances.

Finally the dawn has broken on you. Well like they say better LATE than never.