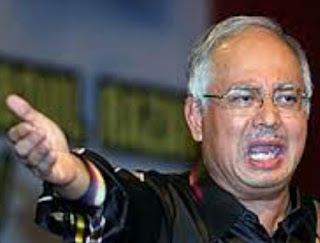 PM's latest statement received around 10.30 PM has a different tone than an earlier statement Friday.

Words hardly heard off to come from Dato Najib like "outrageous", and "gutter politics" used. This morning's statement was still appealing for good sense from the media to take appropriate action.

Has his patience with the endless stream of unsubstantiated allegations against him met his limit?

"In recent months, various allegations – all unsubstantiated, and many simply outrageous – have been directed against me and my family.‎

These attacks began when I refused to implement Tun Mahathir’s personal demands. I refused, because I do not believe it is right for Malaysia to be ruled by proxy.

Tun then created a crisis when he recklessly claimed that RM42 billion was missing from 1MDB, when in fact these are audited debts backed by RM51 billion audited assets.

The latest allegation is that I have taken state-linked funds for personal gain. I believe Tun, working hand in glove with foreign nationals, including the now discredited political attack blog Sarawak Report, is behind this latest lie.

Let me be very clear: I have never taken funds for personal gain as alleged by my political opponents – whether from 1MDB, SRC International or other entities, as these companies have confirmed.

It is now clear that false allegations such as these are part of a concerted campaign of political sabotage to topple a democratically elected Prime Minister.

At no point have those making these allegations offered any evidence. All we have heard is that these allegations are based on leaked documents and unnamed investigators. Not once has the source of these documents ever been shown, neither have the documents themselves been provided for verification by lawful authorities.

As we now know, a number of the documents on which recent allegations have been based were reportedly doctored. The person who was leaking these documents is under investigation by authorities overseas for attempting to extort and blackmail his former employer. This says a lot about the reliability of the documents, and those who are using them to damage our government and our country.

Those who continue to mount these attacks should be prepared to face the consequences of their actions. These gutter tactics - in some cases criminal tactics - to overthrow the government will fail. Where appropriate, they will be met with the full force of the law.

It’s a shame that these false attacks motivated by self interest come at a time of unique opportunity for Malaysia – with our Chairmanship of ASEAN this year, and the prize of developed nation status around the corner.

I will stay focused on the work of nation building for the people."

Compare that with this morning's statement. Read below:

"Despite the Prime Minister's successful stewardship of Malaysia's economy against global headwinds - as recognised this week by Fitch's upgrade - there have been concerted efforts by certain individuals to undermine confidence in our economy, tarnish the government, and remove a democratically elected Prime Minister.  ‎

"These latest claims, attributed to unnamed investigators as a basis to attack the Prime Minister, are a continuation of this political sabotage. ‎

"It has been reported that criminal leaking of documents, doctoring and extortion has taken place to mislead the media and public.

So it is incumbent on responsible members of the media not to accept documents as genuine unless verified by the appropriate authorities.

Regarding the allegations themselves, it must be noted that 1MDB has already stated that the company never provided funds to the Prime Minister."‎ ‎

In the meantime, why don't get the bank to deny that there was no such transaction between the said bank. And knowing DSN before has performed "bersumpah" on Altantuya case. So just get DSN does the same. This will clear some air on this recent news.

I wanted to read all what he penned but when i passed paragraph two and three i lost interest. This 42billion-debt-backed-by-51-billion-or-whatever nonsense is a very tiring and BS answer. And it is a hallmark of a business model that is bound to fail. Although it maybe one model to do business but it is a very bad one. Everytime the deadline to pay the interest or loan or whatever does it means they had to sell something to pay for it and make money?

It sounds to me this company is just eat above wind only. So whats so super good about it? And eat above wind with government sell the land so cheap then re evaluate it to higher value then sell? It was suppose to be a strategic company whatsoever

And to link Mahathir to those claim? And with that paragraph three link those with the now 'allegedly' fake emails whatever. I read about the arrest and i am willing to forgo the accusation about it being staged, but like Salleh Kruak said - he often got something to say about anything and everything these days and all he said were ridicolous - where is the proof? I thought with vast police force and allllll the intel we have of course we cannot rely on words of the foreign police guys. And 'personal demand' ... Really? This guy hasnt got a clue how to run a management let alone a country. You can kill a few birds with a stone throw but apparently he got no idea about it. Last time when ringgit was this low NEAC meeting very frequent on daily basis to monitor progress and stuffs, but now that ringgit was worse than it was i never hear about something NEAC is being utilise at all. Dont tell me if we dont hear it doesnt mean it does not exist this guy takes credit for all he does, just like they pin the stable rating on 'debt moderation' ?

I think despite his failings and bad management styles, he made the wrong moves when it comes about dealing with Mahathir. Un wise moves should i say. Mahathir questions were never been answered well and carefully and let Arul talks. Arul is gone believe me he isnt the material to speak to Mahathir.

And ah, if i were a 64 years old wife with bad knee and had to take double night medicine i would limit my movements and activities and certainly i dont want to be seen walking around so much even to functions where none of the others wife were there. Doesnt it look absurd if i were to be there and no other wife was there? How a simple matter ( with huge implication ) like this they cannot figure?

Again, giving credit to SR. it was WSJ. come on najib, address WSJ. it is not going to work this time. Hell, the WSJ writers even left their email. Why not you get in touch?

Only ONE WORD can Describe this Fellow..

This moron is saying that these allegations are without proof. But he is claiming that it is a conspiracy to topple him. Does he have the proof? Or only UNITS,JUST UNITS?

talking about najib patience ? how about rakyat patience ? we also have our limit... time to go najib before its too late to save umno

Where's BNM enforcement about this private fund flows? What about bank own internal compliance about fund flows in large amount to an Invidual? And where's BAFIA ? So PM can over ride BAFIA! Does not make sense!