Humpty Dumpty fell from a wall 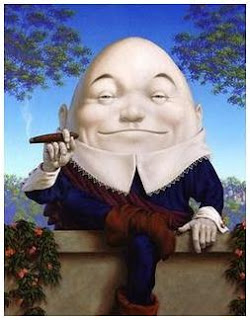 
Had always wondered all these years to know who the big headed fella nic-named for humping and dumping something on the wall.

Why is he sitting on a wall that led to his fall due to the precarious lop-sized weight up his head?

Since he has an unstable posture, why was he humping and dumping on a wall?

The nursery rhymes seemed meaningless. Is it merely describing this human or perhaps a metaphor of someone with a big head falling?

Is this humping and dumping big-headed man so important that the King's horses and men tried to put him up again?

And, is it important for him to hump and dump on the wall?

Guess he is not only big-headed but a very important man of distinction and pedigree. Could be a feudel lord or as depicted in the picture above, a banker or wealthy man.

In this blog posting here, where we obtained the picture, it turned out that Humpty Dumpty is a huge (say it in the manner of Donald Trump) cannon.

So ... the big headed man doing all the humping and dumping of something up on the wall turned out to be not only prominent, but a loud mouth.

Nursery rhymes can be interesting.

Perhaps it is a warning to all kids that any loud mouth with a big lop-sided head could fall from a wall for humping and dumping.

When was it that humpty was "humping and dumping" on a wall? You cant even understand a kiddie rhyme ROFL

Allow me a shot to interpret.

Humpty dumpty must be someone high up there who fell off. The fall must be so bad that he could not return to the original position.

The clue given by you is humpty dumpty is big headed and has a loud mouth.

If the nursery rhyme is recited in past tense, then one person seem to still have desire to hump but not necessary can still hump. The person cannot stop dumping people.

Should it be recited in past tense for the future, someone is due for a big fall.

The person can still hump but dumping he just acquired that habit. So how will he fall?