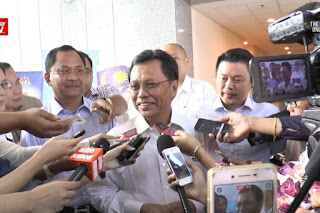 Must say that our sources is not too far off in their information on Dato Shafie Apdal's new political party except perhaps the party name.

In the previous posting, the political party claimed to be the new platform for Shafie will be Pakar. The only comment received was to suggest changing the alphabet "P" for "Z".

It was directly picking on Shafie's second marriage to Zahida Rafique. He still did not own up to an already open secret. Never trust someone who do not take responsibility for his own action.

Pakar or "Zakar" may not be the party. Another source claimed, it could be Perpaduan or Unity. That would tie together with Bersatu or the rejected acronym for PPBM.

Dato Rahman Dahlan commented in his Twitter and it was reported by Malaysiakini here, "I said this before. TSMY (Muhyiddin), TunM (Mahathir) & DSSA (Shafie) will only cannibalise support from current opposition. The defection of PKR's MP Penampang proved it!"

One of the subject discussed was written in the previous posting. It is the possibility of PKR closing shop and a new political slogan to remove Malaya party out of Sabah.

Darrell said, "It was more of a political decision after taking into consideration the current political expectations and sentiments – but I stress that it has nothing to do with any personal matter.

"You, being from Sabah, would probably understand when I say it is a Sabah thing and what more the political conditioning on home ground – vis-à-vis local party and national (or as commonly used back home “Malaya”-based) party."

Malaysiakini here reported his claimed that Malaya political party failed and their politics is destroying the country with the racial and religious polarisation.

Both BN, PH, PPBM and PAS should heed his twitter quote: “Whereas, Sabah and Sarawak are harmonious. Malaysia is being bankrupted by Malaya parties.” The Malayan public and younger voters may agree.

In the previous postong, a source claimed Shafie has RM200 million to help Darrell's political cause but the much talked about is Darrell received or paid RM5 million to leave PKR to join Shafie. Mkini reported Darrell denied and demanded proof.

The problem with Malaysian public is they prefer to believe conspiracy theory and accept or reject information to fit their pre-emptive conclusion than conclude based on comprehensive consideration of available and verifiable information.

Darrell is hoping his second jump to frog into his third political party will be a success. Maybe he forgot to consider the perception of the KDM community of him accepting a Suluk as his leader.

And, he forgot what Malaysian Ambassador to the Vatican City, Tan Sri Bernard Dompok capable of doing at Penampang's 90% majority Christian constituency.

Perpaduan could turn out to be Hampedal or chicken gizzard to Darrell.

UMNO, specifically UMNO Sabah do not see Shafie as a serious threat. His reputation will precede his new slogan and political makeover.

The theme of Darrell's move to join Shafie could spread to Sarawak.

Talk is Sarawak PKR Chairman, Baru Bian is considering to leave PKR and out of the chaotic and inharmonious Malaya party of PKR.

Sarawakiana here reported Baru having trouble convincing his voters and supporters of Anwar-Mahathir cooperation. PKR was established to attack Mahathir for injustice towards Anwar but now both are cooperating to bring Najib down.

It was recently revealed in court by a former Anwar operative but now actively with UMNO, Dato Lokman Nor Adam that Anwar was to be removed by Mahathir for launching an attack to topple Mahathir.

Anwar privately told him Mahathir is an untrustworthy mamak and gave "bullets" to criticise Mahathir in the last of the three months as DPM and UMNO Deputy President.

It is political revelation like this that made East Malaysians puke at the chaotic federal politics colored by Semenanjong's negative, irrational and immature politics.

Be it Anwar or Mahathir, do not trust Geng Loceng.

Nothing racial as it is not intended towards Indians but about Keling and they are usually of the Indian Muslim stock.  Even Indians do not accept Keling as representive of their race.
at 9/24/2016 12:16:00 PM

i think whatever you want to say about shafie apdal, with shallow political knowledge and limited informer, you should not deny that shafie's action will definitely be more damaging to UMNO than what Mohidin can do in Johor. in the Brexit and Trump era, people are inward looking, especially in a hard times like now. shafie got the Sabah opposition to be behind him, things that rahman Dahlan and said keruak can't never achieve in their lifetime. he can always play the Sabah for Sabahan motto and accused that musa, anifah, said keruak and rahman are all stooges of peninsular power. and being a nephew of sakaran dandai, the most respected figure in sabah politics will surely help. even if shafie can't win all in sabah, shifting another 5 or 6 parliment seats from BN will do a lot of harm to the overall results.

you think season leader like Mahadey didn't figure this out?

and another important indication of BN down fall is Ku Li. he always bet on the wrong side. after became a strong critic of the present govt, suddenly he make a u turn. he again make a u turn on his earlier decision to retire from politics. Ku Li is one example of Haji Hadi's "politician lepas tarikh lupus". Ku Li should just retire, his reputation is already damaged. being a loser, his hope of becoming PM is just a big comedy.

Shafie is not a sure thing even for semporna. Let alone for sabah.

The war is not done yet, the battle is still on-going. Both Husham & Mathias were merely retreating in order to 'match' with latest development & DOJ's course of action. A fresh summon in due course will be forwarded on par with DOJ's latest prosecution.

Meanwhile Anina has to withdraw her summon as she is no longer an UMNO member. Of course in doing so, she has to bear the cost incurred. Those earlier summon was made when she was an UMNO member. The joint Mahathir-Khairuddin-Anina's summon is still in force.

Those damn monkeys & nuts on the other side of the fence do not have the capacity to grasp what is actually going on but merely jumping in frenzy ecstacy. Their low mentality & education is easily manipulated by that skunk RPK's deceptive spinning. Like I said before, believing RPK meaning believing Rosmah & Najib's involvement in Altatunya's murder