Psyop in play but how will UMNO response? 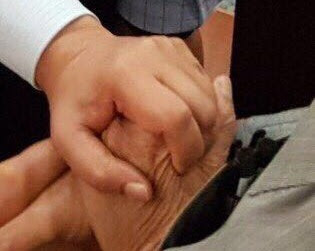 To divert the exchanges involving Tan Sri Muhyiddin with few UMNO leaders to the point of name calling with regard to his remark on Dato Najib's acccount, Muhyiddin made another statement claiming UMNO could lose 45 seats.

UMNO leaders are all too familiar with Muhyiddin and the personalities in Pribumi Bersatu (PB) to gauge their political strength. That statement would not be convincing enough for UMNO members to migrate en masse to PB.

However, he may have known that Tun Dr Mahathir is appearing in court on Monday.

Perhaps, it is the height of hypocrasy, but the image of Tun Dr Mahathir in a handshake with Dato Seri Anwar Ibrahim, after 18 years since Anwar was removed and subsequently jailed, leaves an imprint on public perception.

On close-up, it looks akin to Anwar grabbing hard on Mahathir's hand as though to avenge his past deeds. But the wider image sent a message of Bersatu and instantly gives the immediate impression that PB can unite the opposition to shake BN's strength.

Maybe the ground game advantage of either PB or PKR or Amanah is far from the strength of UMNO or PAS in the Malay areas. BN should not take it for granted. Having the like of Idris Haron still hotdogging should be a matter of concern.

This is god-sent as Bersih 2.0 Chairperson, Maria Chin. She seem to indicate it could help her upcoming Bersih 5.0 after the poor showing at Tangkap MO1. Will it be in November? 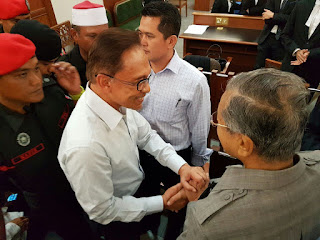 Knowing the public and whatever remain of public still having interest in politics, they are generally gullible or in more politically correct term, cognitive miser to psyop. This is where the Machivellian master is at his best.

As said in many past postings, when it comes to Mahathir, it is all about politics. So do not get emotional and personal. If we live long enough, who knows? We could one day be having coffee at The Loaf at Telaga Harbour, Langkawi and laughing all these off.

Time to put aside initial reaction for a longer posting to analyse all this rationally.

Give the pentaksub to both Mahathir and Anwar time to realise they were sold off all these years. Leave no-speak Tan Sri Zam and believe-everthing-Mahathir-say Dato' Ibrahim Ali in their elements. It would only anger them to be told Najib contributed to the unity of ummah. Just a joke, OK?


Big Dog posted: You thought you have seen it all. Rocky wondered here as to what will be his limit:


"... first, he was hoping to lobby the Rulers to meet him; second, blaming Megat Junid for the ISA arrests during this premiership; and latest,  to apologise to the Rulers for the amendment on royal assent. God knows what's next!"

Mahathir the tactician do not do things at one go. He may have few steps ahead in mind. This is merely a psychological warfare tactic, as Wikipedia described:


The term is used "to denote any action which is practiced mainly by psychological methods with the aim of evoking a planned psychological reaction in other people."[2] Various techniques are used, and are aimed at influencing a target audience's value system, belief system, emotions, motives, reasoning, or behavior. It is used to induce confessions or reinforce attitudes and behaviors favorable to the originator's objectives, and are sometimes combined with black operations or false flag tactics.

Mahathir is capable of making all look to the obvious left but actually looking right. It seemed he is actually made peace with Anwar and would next make peace with PAS. He may have other intention four or five steps ahead.

In the meanwhile, Mukhriz's boys still want the public to believe Mahathir was there merely to support Anwar's challenge of the MKN Act and Anwar pretend it not be so. Sure Anwar ...


Coming back to psywar.

Based on the psywar methodology of Mahathir's leutenent in the past, he would be looking to change the public attitude, behaviour, mindset and perception to the point BN advantage in their campaign machinery and ground game could not hold back the tsunami.

All the weird remarks lately from Mahathir could be to deceive the historically ignorant Gen Y and new millenials. He could serve to pass over to push aside early any issues with regard to his past sins. Be prepared for Mahathir to blame someone for Projek IC in Sabah.

More important, Mahathir is re-moulding the public to be anarchic for anything goes and no limit. If BN still win, he will likely lead a people revolution. He could be picking up where Anwar left.

For politics and tactical objective, Mahathir is willing to put aside any past slander he made of Anwar. Public is in a state of shock and perplex with his action but it serves his psywar need to gain attention.

Mahathir does not give a wink to critics on his compromised principles, U-turn on his past words, and even, admitting and cleaning his past sins. He has the narrative to convince and re-tune the public to the new Mahathir.

In 2012, Mahathir said it is better to vote the devil you know than the angel you don't know. The devil could then be BN but now it is Anwar and his new friends. Saiful Bukhari Azlan is of no significant to him now. Could be cast aside like any of his past supporters that is of no use now.

Dato' Salled Said Keruak see Mahathir as in a state of desperation and need to shore up support for PB. It may indicate him losing faith with Pribumi.

Dato Seri Zahid Hamidi see all this as more than meets the eye. He agree with Salleh that it has desperation written all over.

As RPK analysed it and repeatedly harp on the same point, Mahathir cannot rely on Muhyiddin. Neither could his own son, Mukhriz who couldn't give a response to the challenge to swear on the Quran.

While, Dato' Nurjazlan see Mahathir's move could backfire on PKR. He believed it will not strengthen opposition.

The backbone of Anwar, which is the supporters of reformasi, could dissipate: 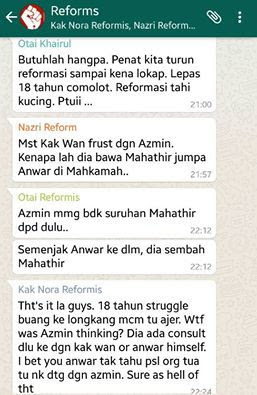 The enmity towards Mahathir maybe forgotten by some but not to them. They could be seeing Mahathir as using Anwar for various purposes. This is seen as the work of Dato' Azmin Ali in his quest to oust Datin Seri Wan Azizah.

Azizah may have sounded appreciated but Rafizi still has an MACC report on sexual favour for projects leveled at Azmin.

The sacking of Chegubard could be a ploy by Rafizi. Chegubad was sacked for making an MACC report on alleged scandal in the sale of Paya Indah Wetland to developers. He is expected to continue his assault on Azmin. Both Rafizi and Chegubard are po-Azizah.

The October 14 court date will be interesting.


Former reformasi activist and now with the government side, Dato Lokman Nor Adam said, Anwar is no more as formidable now that he is prison. It will take him 7 more years before he can return to politics. He is implying Anwar being used.

However, the meet could only be a test bed for Mahathir. Immediately after the meeting, he was not allowing the meet to sink in but quickly moved on to comment on Dato Jamal Yunos and lamenting on the declining state of the rule of law.

Staying focus on the MKN Act. Sure ... tell that in the face of Tun Salleh Abas and the other former Supreme Court judges, deceased and living.

There are also extreme reaction heard such as willing to support Najib despite the embezzlement allegations because both Mahathir and Anwar are liars and destructive to society and country. Both are bigger corrupt themselves!

The more cultured quoted Shakespeare: ‘The serpent that did sting… Now wears the crown.’

In Salleh's latest remark, he accused Mahathir for his ultimate betrayal. He argued that Mahathir open the door for "foreign interference in our internal affairs".

The social media is filled with allegation of an attempt to repeat Soros-style currency attack using propaganda allegedly by a fake Tun Daim but suspected to be Dato Abdul Kadir Jasin. The factual errors indicate someone with no academic like the slander on Tabung Haji by two anonymous blog but believed to be operated by one journo blogger.

At least, not all of UMNO are asleep in their comfort zone. Pemuda UMNO's Dato Armand reminded: "UMNO jangan sombong dan berlagak."

All Mahathir and Anwar need is to convince PAS to oust UMNO. Armand's former boss in Perkasa could be working on it. Ibrahim Ali started a rumour he will be running on PAS ticket for Pasir Mas in the next election. Nik Abduh was told to not perform and will be switching for other seat.

It could mean Ibrahim Ali has an open channel with PAS. Nik Abduh could be pretending to be positive on the cooperation with UMNO but made conclusion UMNO is a sinking ship. Look left but move right?


Najib seemed resolve to fight Mahathir to the death.  He said last weekend that he is not afraid of Mahathir. In the past few weeks of UMNO Division meeting, he is no more discreet in his attack of Mahathir.

Mahathir has only one and only issue on Najib. Far less than his attack on Pak Lah. That is 1MDB. The one issue attack have been working so far.

In Sabak Bernam recently, there is indication public are getting tired with the issue. They want to hear positive suggestion more relevant to their life and welfare than endless blame.

Najib has many issues to play against Mahathir but all the psyops and ground game depends on how he clear up the 1MDB issue. The outcome from the court will take forever.

In the meanwhile, the pounding will continue. ANC or anti Najib Campaign will intensify to enlarge every other minute points to sensationalise. The latest here is somewhat explosive to the less conversant but still recycle though.

Does Najib have any trump card to release at the last minute to kill off all attack against him? Will the same game work against the master tactician?

After more than 2 years, the damage is done.

Come to think of it, the blame on Najib and Datin Seri Rosmah for the death of Altantunya and linked to allegation of bribe in the purchase of submarines took longer. Anwar introduced the issue in 2007 with Tengku Razaleigh covertly behind. It lasted till last 2013 election.

By the look of it, Mahathir may not have enough time. He looks to be in a hurry as he jump from one issue to another, one effort to another, before any could sink in. If it does not explode as big as he hope, he move to another ammo.

let us see what wil happen after that. it can b a non starter or it can b UMNO worst nightmare.

I 4 one wld contribute 2wards its success. Insya'allah.

I HAVE ALREADY ENVISION A LONG TIME AGO THAT
UNITED MAMAK NO WILL TAKE OVER UNITED MALAY NO.

I have already envisioned a long time ago that
PAKATUNs will be dead and buried soon.

Yes Bro Umno is definitely a sinking ship... the tell tale signs are too obvious too ignore.