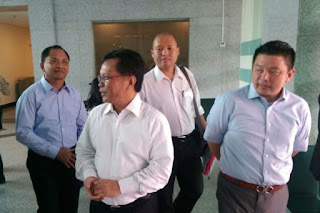 In an anticipated move, The Star Online reported Dato Seri Shafie Apdal will be taking over a dormant Sabah party as his political platform to take on BN in Sabah.

He was spotted at the ROS office this morning with Dato Jaujan Sambakong, state assemblymen for Sulabayan who quit UMNO together with Shafie.

In a related event, MP for Penampang, Darrell Leiking announced resignation from PKR yesterday. Only last week the PKR VP demanded Tun Dr Mahathir to admit Anwar was a victim of political persecution.

The former UMNO Penampang leader was also seen with Shafie at ROS this morning.

Sabah political analyst with a government agency saw this as an interesting development. Darell is a Murut and Bajau is not known to have close links with KDM.

Talk is Shafie enticed Darell with a RM100 million funding to help service his constituency and make in-roads into seats at Kota Merudu and Tauran.

Darrell will enable Shafie with little influence outside Semporna to reach out to the KDM voters as he pursue his Bajau Laut or more accurately, Suluk clan in Semporna, Lahad Datu and Tawau.

Another PKR politician to join is assemblyman for Moyog, Terence Siambun. It was rumored last year that Moyog will have a by-election arising from a pending bankruptcy issue.

FMT reported Tian Chua giving a positive response to Darell's resignation to claim PKR will be working together with Shafie's party.

Whether it is for face saving or in-denail, this development is likely to have wide ranging implication for PKR in Sabah.

Shafie's close association with PKR is an open secret.

It traces back to the episode where he had slandered CM Dato Musa Aman for political fund in Hong Kong controversy . However, Musa was exonerated by both Hong Kong's CAAC and MACC.

Shafie is expected to reach out to the 18 PKR Cabang members that quit PKR after the last General Election.

This blog raised of that eventuality earlier at the time Anwar was singing, "Najib sudah  goyang". Can Shafie do it or another way of asking, can Shafie's money buy them?

His overture to UMNO was ignored and no offering at all was on the table.

Shafie tried to return to UMNO but the intermediaries he reached out refused to assist. His politics of keeping his constituents impoverished and dependent is too revolting for Sabahans in the know.

For quite sometime, Shafie had been excluded from the UMNO Sabah circle.

It leaves the possibility of PKR closing shop in Sabah, thus for Tian Chua's cooperation statement. However, Lajim is not the holder of the key with access to the 18 Cabang.

The new party will have multiracial membership.

DAP assemblyman for Likas, Junz Wong have been standing out as a sore thumb with his odd political stunts.  He will be the first Chinese face to join Shafie.

Shafie declined to disclose the party's proposed new name but words are he will announce it as Pakar on the 29th.

Mahathir's people have been working for more than a year to make in-road into Sabah.

Several months ago, a successful entrepreneur-politician with ties to Shafie was heard to make effort to reach out to professionals and intellectuals groups.

Leading to Malaysia Day, Darrell was noticeably vocal to demand the Malaysia Agreement 1963 (MA63) be debated in Parliament. It was argued that as a document already agreed upon, it does not need further debate.

An expert on MA63 and formation of Malaysia, Dr Zainal Ajamain will be leaving his employment with Sarawak government and adviser to Tan Sri Adenan Satem to join Pakar.

Though not divulging any details, Darrell praised Shafie has the vision for Sabah to explain for his involvement.

These are clues to the agenda for Shafie's new party and the way to cover-up his own and Mahathir's shortcomings in Sabah. Shafie will likely emulate Mahathir's M.O. to accuse others with one's own past wrongdoing.

The past beat of Sabah for Sabahans will be drummed up again.

This time Shafie will turn around to use MA63 to accuse his arch enemy, Musa Aman for compromising Sabah interest and using the recent exchanges with Adenan as his opening.

At the same time, this strategy serve to steal the effort made by Dato Anifah Aman to claim as his own.

Shafie comment on the "Projek IC" RCI proceedings few years ago should be relevant soon. There was more information held back than the ones "spinned" for Mahathir's face saving.

In 2013, Najib allowed the RCI requested by KDM leaders.

The person lobbying within the cabinet was the Minister Darrell beat in the last General Election and now Ambassador to Vatican City, Tan Sri Bernard Dompok.

With PKR out of Sabah politics and PPBM cannot enter Sabah, Shafie could use a campaign line used by BN in the recent Sarawak state election to call for rejection of Semenanjong political parties.

It is obviously targeted at UMNO but collateral damages will include MCA, Gerakan and possibly DAP.

It will be in contrary to Shafie's statement at the time of his resignation from UMNO. Shafie claimed he contributed to UMNO's growth in Sabah. He was part of the effort to close USNO and bring UMNO in.

In the meanwhile, Shafie have been working with few of the eight UMNO Division heads that revolted against Musa last year to move to unreached areas.

With Shafie expansively reaching out and linking up to any outfit to expand and establish his political network, is he linked to a certain development at SLDB?
at 9/22/2016 11:27:00 PM

Better change the p in pakar with z. Describe shafie's daring feat to marry botox queen and still trying to hide his marriage