Why accuse Mahathir of messing up public transportion? 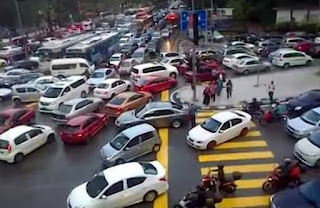 Whenever they accused anybody of anything, it is highly likely they are the bigger culprit and the accused did not do it but being blamed to cover their wrongdoing.

But the blame of legacy issues inherited from the past administrations are placed on Najib's lap. If Pak Lah's problems is said by an insider require 15 years to address, Mahathir's will be forever.

The public transporation is a fine example KLites have to bear due to the mess that Mahathir made.

In the posting here, it was mentioned:


Public transport model in developed cities of the world kept fare low by giving rail owners oppurtunity to own development along the rail line.


Mahathir's public transportation was for self-interest thus the model is intentionally poorly conceived. It became a problem for rakyat and financial burden on public coffer till today.

His heart was never in it. He never cared for the common folks.

That is why his son, Mukhriz refused to address the low rubber prices of smallholders in Kedah. He only gave them beras, gula, garam and kopi.

To Mahathir, Melayu malas and genetically inferior thus needed tongkat. But he took advantage of the tongkat meant for the poor and those needing social uplifting.

So far, Najib has the political will to address the accumulated problems from the past on the rakyat. But Mahathir collaborate with opposition to stop and intend to bury him.

Mahathir calls effort to lessen and alleviate the daily hardship of rakyat as "makan dedak" and ridicule Najis as cash is king.

Give projects to his children, cronies and proxies, he will keep quiet or if you are lucky, he will praise to high heaven.

Lim Sian See wrote in his FB today that will send the factually and academically deficient "pemakan det-dak" screaming, "Dedak!":

1. KL Monorail line - The privatized monorail project was approved in a cabinet meeting June 1989. Its cost was then estimated at RM 143 million. When eventually completed and opened, it cost RM1.18 billion in 2003.
- went bankrupt.
- Bailed-out and taken over by the govt-owned Prasarana in 2007 for RM882 million.

--- 4. Intrakota Bus Services.
- The privatized bus services started operations in 1998.
- went bankrupt.
- Bailed-out and taken over by the govt-owned Prasarana in 2003 for RM177 million.

Penang Govt still want to spend RM46 billion (about RM19 billion of that will be borrowed) to build LRT and monorails for their 700,000 people on Penang Island (1.7 million overall for the state)?

Building it is one thing but the operations and yearly cost will be big - especially when your population size is small to begin with.

Those who end up paying will not be the DAP folks as they would be kicked out long before. It would be successive generations of Penang people straddled with the debt you put on to build it and the possible yearly operating losses which can be substantial.


Before the forever in-denial Kelab Che Det, who are now hypocritically supporting DAP and the sodomist party of PKR, scream "dedak", try improve their lack of intellect and factual deficiency in their argument by looking up in the history section of Wikipedia on Prasarana here.

It was dumb to use bank and institutional investors money to fund public transportation. This is not an after thoughts but the laughing stock of officers at Aseambankers decades ago.

Most likely the chicken brained "det-dak" eater will refuse to see the light. They are over-awed with Mahathir's pyramids as milestones of progress. And, are sold hook line and sinker to Mahathir's conspiracies and hate mongering of Datin Seri Rosmah.

Mahathir is their prophet thus "maksum" from any weakness and sin. It is unlike Najib who admit he is human, made mistake and apologise, even for the sins of Mahathir.

Najib who admit he is human, made mistake and apologise, .... still wonder who is MO1. Billions bro in his personal account... some is to keep his dedak eaters.

Najib's infrastructure play is very dangerous for the country.

As at now, the MRT Co and Prasarana had already borrowed RM70billion by using DanaInfra to finance MRT1 and LRT extension. There are more borrowing to complete MRTLine 2, MRTLine 3, LRT line 3 and the stupid Pan Borneo projects. And of course the HSR.

Nobody seems interested to do a cost benefit study on those projects. EPU under JPM has been sidelined by Gamuda (for MRT) and Sunway/George Kent for LRT. Somebody told me, the scandal in infrastructure play by Najib/Rosmah will make 1MDB scandal small. How huge the kickback and overpriced this projects are something that need to be investigated. This country can no longer burdened by the huge infrastructure projects that trickle little effect to the economy as a whole. How are this country able to repay back the huge borrowings incurred by DanaInfra. This country is trap by Najib's inability to boost the economy without spending big. his economic formula of big spending to cater for GDP growth is killing the whole economy. everybody can feel it now an

If you say Mahathir and Pak Lah make a mess, Najib is making Malaysia into a third world country with high debt and low opportunities. we are doom. we no longer considered a developing country like in the 90's.