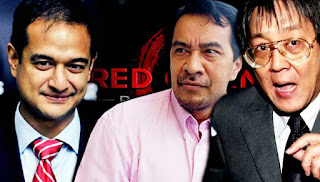 Matthias Chang and Dato Husam Musa sued a Hollywood wayang company. It was long suspected that the lawsuit was a wayang. Their wayang to cover-up the withdrawal exposed their wayang.

In Rocky Bru's posting here, Matthias Chang said he will come out with the last laugh and Dato Salleh Said Keruak's last statement is counting the chicken before it is hatch.

Salleh made a statement to respond to the withdrawal of lawsuit by Matthias Chang and Dato Husam Musa as mere a media stunt.

From his blog here, an extract from his statement explained:


3. The reality is that it was baseless from the start, a pure publicity stunt to manipulate public perceptions. Part of Tun Mahathir's plan to sabotage 1MDB and damage Malaysia's economy to unseat the democratically-elected government. And all this for selfish political reasons, just to benefit his son Datuk Seri Mukhriz Mahathir.

Do not know what the dramatic Matthias and drama actor-politician Husam has scripted and kept in their sleeve, but the public statement and report on the withdrawal supports Salleh's claim.

The international media intentionally played up the lawsuit by Matthias and Husam and also the withdrawal of the award to Datin Seri Rosmah Mansor by one claim to be UNESCO and another report claimed as some other outfit.

When the lawsuit was withdrawn and UNESCO kind of "apologise" to Rosmah for their boo boo of prematurely announcing the award, no coverage was due given.

That media spinning technique is as old as the oldest profession in the world. It is not refering to farming.

When spinning needed to deliver a message, the so-called lawsuit is suspect.

Lawyers love to caution their naive clients to not play lawyer. That way they could do their job without clients interfering and basically allow them to charge their clients to the hilt.

Leaving the legal part to lawyers, something was out of sync and it looked Matthias seemed to have taken his lawyer's bip off to put on a dramatic mask.

When news first broke out on Saturday [read FMT here] that the duo had withdrawn their class action against Red Granite, not much detail was reported except Red Granite was reported by Hollywood Reporter commenting that "it should not have been filed in the first place".

It is fair for Salleh to assume the duo lawsuit was dismissed.

Off late, the other side have not been doing well with their court drama. Khairuddin lawsuit on use of Sosma rejected. Anina's lawsuits against Tengku Adnan and Najib withdrawn.

To save face, Husam issued a statement to rebut Salleh. Taken from a then pro-UMNO but now pro-PPBM blog, Husam denied their lawsuit was dimissed by the court:

Husam claimed it is a voluntary dismissal or in other words, withdrew their lawsuit to await further development to refile a new lawsuit.

Such practise is allowed under US law. But it is an abuse of the law.

The new development mentioned is Red Granite application to limit the freeze to proceed of income derived from two mentioned movies which allegedly as claimed in DOJ filing was funded by money diverted from 1MDB bond issue meant for Arabs.

FMT reported that "according to a Variety report, US prosecutors filed a stipulation with Red Granite that sets up a procedure to segregate proceeds from two Red Granite films' on August 1st, 2016.

This development happened before the duo filed their class action lawsuit!

Did the "dramatic and drama actor-politician" duo intentionally filed a lawsuit to withdraw later using the excuse there had been a new development when all along the new development happened 10 days before their lawsuit?

If it is intentionally done and Matthias claimed, "We know what we are doing", they are up to something.

Lets hope it is not the same play as potshots taken against Rosmah, spinning Najib's not attendance of UN General Assembly, Mahathir audience with Agong, hypocritical call for PM not to be MoF, and "cakap tidak serupa bikin" to limit PM term to two.

The latest is Mahathir's "pathetic" talk in London.  The remark was made by Mariam Mokhtar. She expected a lot from the talk.

Having been talking for a long time. Do not believe every sensational going-ons. It could be a trick so get both and the many sides of the story.

When still not sure, do not pass remark just cause you have many unanswered questions.

It is OK to raise doubt but it is not enough to conclude and judge wrongdoings happened, especially when there exist doubts. What more to call on a democratically elected leader to step down.

Matthias is a dramatic person but he is not a liar. He is what the Malay described as full of tipu helah by virtue of being a lawyer.

And, he is former political secretary to the most deceiving politician and astute in the art of psychological warfare.

Though Dr Wan Hasni felt the complainant to the DOJ filing was the Abu Dhabi, there are those that suspected it was Matthias.

Giving him the benefit of the doubt, maybe he knows something.

If the benefit of the doubt is withdrawn, he is hoping the re-filing by DOJ will open him to leads to re-open the lawsuit.

It means he is grasping at straws and merely wayang.

It seems, trying to defend the indefensible is getting harder, by the days.

Care to explain why 1MDB's Financial Report for 2015 is still not forth-coming?
Cannot find a replacement for Deloitte?

I understand why Pro-Jibs seem to neglect or forget... about news that both, the Board of Directors and Deloitte have, sort-of, disowned their own 2013 & 2014 Financial Statement.

Below is excerpt from 1MDB's Directors statement:

And below is from Deloitte:

'On July 20 2016, the Office of the Attorney General of the United States of America announced that the Department of Justice filed a civil forfeiture complaint against certain entities and individuals and contemporaneously filed related actions seeking the civil forfeiture of numerous assets held in the names of these parties (complaint). According to the complaint filed, this is a civil action to forfeit assets involved in and traceable to an international conspiracy to launder money misappropriated from 1MDB.
The complaint contains information, which, if known at the time of the 2013 and 2014 audits of 1MDB, would have impacted the financial statements and affected the audit reports and, accordingly, those audit reports issued by Deloitte Malaysia dated March 28, 2014 and Nov 5, 2014 respectively in connection with the 2013 and 2014 financial statements of 1MDB should no longer be relied upon.'

I presumed, ‘sebagai langkah berjaga-jaga…./ tidak lagi boleh digunakan & should no longer be relied upon’… as disowned. Sorry if 'disowned' seems insensitive.

I wonder about current 1MDB’s obligation on transaction...e.g. Sale of Edra to China... in perspective of 2013 & 2014 Financial Report and the implication, after it was… ‘no longer be relied upon’.

Don't you think... it would bring about bad taste to 1MDB’s reputation?

Not sure where you are going with this.

I believe that the lawsuit was withdrawn "without prejudice". And the US judge didn't impose any restrictions or prohibitions against the lawsuit being refiled.

So Matthias and Husam still have the option of refiling their lawsuit. Maybe with amended or new grounds.

I am pretty sure that the "dime a dozen" legal experts in Malaysia can opine on this.

So it's still early days yet.

In the US courts, with the DOJ lawsuit etc.

74:12 And to whom I granted extensive wealth

74:16 No! Indeed, he has been toward Our verses obstinate.

74:17 I will cover him with arduous torment.

74:18 Indeed, he thought and deliberated.

74:23 Then he turned back and was arrogant

And Najib did not say anything against all of this. Dont think too much of your side protuns. Nanti terkejut, malu2 babi pulak :p