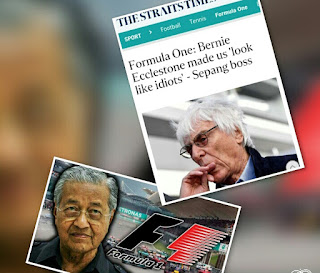 This headline will infuriate a pentaksub.

If it has to be too frank to awake him from his illusion, so be it.

The message need be sent.

The man is no god and perfect as pentaksub wants all to be believe that he refuse to accept and shut others from expressing a viewpoint.

Extract of the report below:


Speaking to Autosport magazine during the Bahrain Grand Prix at the Sakhir circuit, one of several new venues for Formula One since the turn of the century, he said: "When I convinced people to build this place and all the other places, I feel a little bit responsible. I charged them too much for what we provide.

"On my watch, we didn't deliver the show that we charged people for."

He added: "Sooner or later I'm frightened that the governments behind them (the track promoters) will say enough is enough, and bye-bye."

ST's intention was to swing public opinion in their negotiation with current and new F1 owner.

Had an encounter in which his ability to engage rationally is wanting. He basically blew up to any differences or critical opinion against Mahathir.

F1 used to be one of the many physical pyramid building he loved to use to glorify
Mahathir.

It will anger him but "it does not matter".


More from Lim Sian See below:


At first, I was perhaps 70% supportive of Malaysia dropping Formula One but after hearing what the moronic 86 years old former owner of F1 Bernie Ecclestone said,  I am now 150% supportive.

After Najib saw we were losing huge amount of money hosting F1 every year for 17 years, Malaysia decided to drop it from next year on.

Ecclestone then shockingly admitted that F1 had been deliberately over-charging the venues including Malaysia for the rights to host F1 - hence causing them to make losses.

In reply, our Sepang circuit boss Razlan Razali said that Ecclestone lacked respect and made promoters “look like idiots” when Ecclestone said they were deliberately overcharging.

Ecclestone then replied that no one will miss Malaysia's F1 as they still have Singapore. He then said:

“Nobody made him look stupid, and it’s difficult to make people look stupid. If they are, they are,” and that it is not their fault that the Sepang race cannot make money.

We do not need to be deliberately over-charged by old white men like you and treated with disrespect.

We already have our old ex-PM who keep doing this.

No wonder so many famous tracks of the past such as Zolder and Zandvoort, Nürburgring and Brands Hatch had stopped hosting F1.

Even the famous Marseilles Grand Prix was axed for 10 years and will only resume next year.

Therefore, I am now 150% supportive of not getting screwed by white-men, lose a lot of money each year and to add insult to injury, get insulted further.

Our Prime Minister had made the right decision to drop F1.


No one should be denied and stifled from expressing an opinion to please an intellectually and academically inadequate.

Reactions of emotion, temper, and threat to differences in opinion is a clear indication of immaturity and inferiority complex.

Always love bernie. Straight like an arrow. Perhaps too much for a blogger who always want to say a thing or two in everything. Although much of them the blogger is not subject expert

A decent calculation highlight how much an F1 racing gives to the nation. In Japan, cost for 15 second, 1 time airing of advert is 750,000 yen which equals 29k RM. a minute give us over 100k RM. So for an hour of racing, with Malaysian flags and Sepang names this and that blah blah blah, we have got commercial
value of..6 million RM? And with two practice sessions of an hour each and qualifying for also an hour, how much again we got in advertising value? Sorry my math sukcs so much that i wonder how much that spinoffs effect by holding an F1 race in here

Of course you may argue it isnt tangible whatever. Again this is where you lack the finesse as a leader, let alone a statesman. The space and time are there so why not you yourself prepare something very good advert to show off?

Race seat sales dont bring monies in that much to cover the cost of having race, lets be honest on this. So do Hockenheim, Korean, and many others. The tricks are 1) get the surrounding economy running, and 2) be creative to generate spin off racing events.

As for (1) it needs government interventions. How much have been done by government of the day to excite Sepang / Putrajaya area? If you ask me again how to excite then might as well I be the chief! Have a look again at air inbounds, hotels, and the taxes collected on this event? And as for (2) how much the managements of F1 have done? Dont tell me you had done enough because if you manages to say that, it means you dont.

Just go and have a look at how Singapore and the US grandprix events. How they do it that the race becomes a profitable one.

But many believe that the decision has nothing to do with justifications, potential economics, human capital development, or anywhatsoever. Its the money thing. And now you take away what has been a catalyst for a greater Malaysia, and what do you expect the aspirants to be? Alex Yoong was the first and it generated so much interests to watch one of our own to race on our own track. Another malaysian racing in f1 could trigger much more interest but it seems nobody is interested anymore.

The only reason of not having it, is money. Its the lack of money. The cost of having an F1 race is about 20-35 mil USD annually give and take, which equals 80-140 mil MYR. So by not having it then it saves the coffer of about 80-140mil MYR

Lets hope the money saved is used for developing aspirant F1 champions of the future. Not to do some stupid sovereign fund

Are you so insecure with your argument that you have to start with "Perhaps too much for a blogger who always want to say a thing or two in everything. Although much of them the blogger is not subject expert"

I'll leave you without a reply. Trust readers will be sensible to weight between your views and mine.

This non expert blogger does not need to latch on to another person name for credibility and is quite secured with it's own cyber identity.