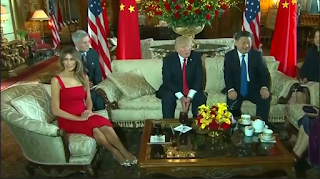 It is unlikely war would be break out in this region this Ramadhan. But a development yesterday could make those aware of the situation nervous.

The Manchester incident was followed up by an Indonesian threat and suspected to be  a reaction to the US-Arab-Islamic Summit in Riyadh which signal a show of force to fight against ISIS. However, that may not be the critical issue to result in a war.

ISIS is a war against an invisible threat. It is just difficult.

In The Mole on Monday, columnist Salahuddin bin Hisham wrote of attempt to "slow the boat to China". He viewed the fear on sovereignty as excessive and dumbfounded.

For one, it cannot be after US President Donald Trump received China President Xi Jian Peng at his Mar-a-Largo resort in Florida in late April and announced to the world of the lucrative deal done with China (including for his own daughter) from China. [Read Vice.com blog here]


In Malaysia, the fear mongers intensified (attack) to the possibility of compromised sovereignty, and South China Sea territorial dispute to neutralise good news from the BRF.

China’s nine, and then ten dash line policy has no legitimacy under any international law. And, Malaysia has not been taking it lying down. It made preparations and alliances but it is just not talking about it loudly.

If a superpower decides to wage war on our soil and sea, Malaysia is not in the position to militarily hold it back from as far back as the days the Portuguese conquered Melaka. It will be mutual interest that could allay such prospect.

There was a positive development at Guiyang, China over the weekend.

Read on here in The Mole, because there was an overnight development: 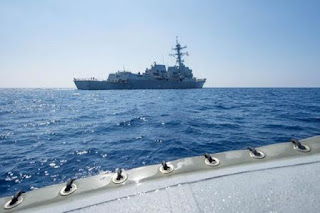 A US warship has sailed close to an artificial island built by China in the South China Sea, the first challenge to Beijing's claim to the waters since President Donald Trump took office.

According to unnamed sources cited by US media, the USS Dewey passed within 12 nautical miles of Mischief Reef.

China said the US vessel had entered its waters "without permission" and its navy had warned it to leave.

The US insists it can conduct operations in any international waters.

It says it does not take sides in territorial disputes, but has sent military ships and planes near disputed islands in the past, calling them "freedom of navigation" operations to ensure access to key shipping and air routes.

It has also repeatedly criticised what it sees as Beijing's efforts to limit freedom of navigation in the strategic waters. 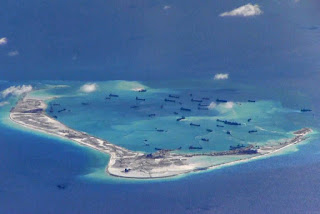 The operation may tamp down concerns among allies of the United States that the Trump administration has been unwilling to confront China’s territorial claims in the South China Sea as it seeks Beijing’s cooperation on issues like halting North Korea’s nuclear program.

Until the operation on Wednesday, the Pentagon had turned down requests from the United States Pacific Command in Hawaii, under the command of Adm. Harry B. Harris Jr., for such maneuvers. It was the first freedom of navigation operation since President Trump took office.

The United States does not recognize China’s claims of sovereignty over the 12 nautical miles surrounding the artificial islands, the conventional limit for territorial waters.

A Pentagon official involved in the operation said the American warship did a “man overboard” rescue drill while passing by the island. The particular exercise was intended to show China that the United States would operate anywhere on the high seas in accordance with international law, the official said.

China on Thursday expressed strong opposition to recent US military maneuvers near the Nansha Islands in the South China Sea and urged the country to desist from taking actions that undermine China's sovereignty and security interests.

Defense ministry spokesperson Ren Guoqiang said at a press conference on Thursday that the USS Dewey guided missile destroyer entered waters near reefs that form part of China's Nansha Islands, and the People's Liberation Army Navy’s Luzhou and Liuzhou missile frigates identified the US vessel, sent a warning to the destroyer and drove it from the area.

"China has indisputable sovereignty over the Nansha Islands and the neighboring sea area, and the Chinese military firmly opposes the US military's behavior which will militarize the region and increase the possibility of accidents in both sea and air. China has made solemn representations to the US," Ren said.

"Due to the joint efforts made by China and ASEAN countries, the situation in the South China Sea is stabilizing but the US' mistaken behavior will worsen the situation. We demand the US correct its mistakes," and "The US' mistaken behavior will make the Chinese military further strengthen its ability to guard China's national security and sovereignty," Ren stressed.

Foreign ministry spokesperson Lu Kang said at a daily press conference on Thursday that China has expressed strong dissatisfaction and resolute opposition to the US' latest move.


swissinfo.ch analysed the incident as:


Greg Poling of Washington's Center for Strategic and International Studies think tank said that under international law, Mischief Reef was not entitled to a territorial sea as it was underwater at high tide before it was built up by China.

"This was a statement to the Chinese," he said.

"The previous two freedom-of-navigation operations only challenged China's demand for prior notification for innocent passage through the territorial sea; this one asserted that there is no territorial sea at all."

Even so, this was the first freedom-of-navigation operation since October and since Trump took office in January.

It comes ahead of a visit to Singapore next week by U.S. Defense Secretary Jim Mattis to discuss security with regional counterparts.

Ah! Singapore .... slow(ing) the boat to China. Or the demise of it's control on port and trade in the region ?

Should we nervous if China or the US or both? Can we do anything?

Did the US Navy ship leave the area after it was told to?

Dud the US Navy ship leave after itwas told to?