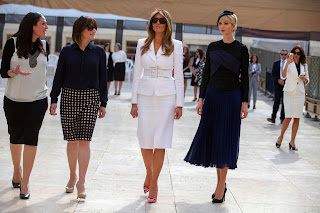 The big story on the "von" Trump family visit to the Middle East yesterday was the visit by surrogate first lady, "Ivana Bint" Trump, as the local Arab News refer her, to the Jewish holy site of the western wailing wall [read CNN here].

The Jews claimed the wall is the remnant of King David (Nabi Daud to Muslims) temple was taken down to build over the Masjidil Aqsa.

Slate magazine was shocked with the sight of Ivana in tears coming out of an important site to her Judaism faith.

They expected her to be the forefront of avant garde feminism. Religion may not run  concurrent to liberal leaning thought according to the orang putih thinking.

The issue that will likely be raised is the US$100 million donation pledge received from Saudi Arabia and Ivana's intiative, Women's Empowerment Fund [read CNN here].

In her show, Oprah Winfrey was not comfortable with Ivana's praise women's right effort by the Saudi.

The Independent headlined it as "Ivanka Trump praises Saudi Arabia on women's rights after country donates $100 million to her cause."

The public may have forgotten by now that the money that was speculated to be given for other role than UMNO's election fund and was returned back.

They could only remember that the RM2.6 billiion tagline the Mahathirite propagandist promoted.

Till today, it is not proven yet as to whether the money was from the Petrosaudi JV with 1MDB but detoured to a Jho Loh-owned offshore company account, Good Star Ltd.

Mahathir's dedak-deprived cybertrooper could only quote DOJ and WSJ but most likely not read the court application in full and understood the legal relevance.

This blog did say it is still a long way from home.

If some detractor are questioning why MACC charge corruption suspects under AMLA and not MACC Act or Penal Code, then the same goes as to why under Kleptocrasy and not a criminal charge.

Same goes with no criminal charges made out in Singapore.

The 1MDB issue is losing steam now, thus one can see Rafizi trying hard without getting much attention on SRC.

Still, it was said Najib took all the money for shopping, buy paintings, New York uptown penthouse and other luxuries, but now he claimed it is for donations to social and politcal operations


He can't make up his mind of what to accuse Najib for.Few names he accused have denied. Ball is in his court side ti answer.

The donation received by Ivana will be played out as an issue because the Donald campaigned to attack Hillary for receiving donation for the Clinton Foundation from foreign state and accused her of being swayed in her role as Secretary of State.

Already, Trump is in a deephole for firing FBI Director, James Comey.

In the US, there is no specific law enforcement agencyto eradicate corruption. It falls under the FBI.

It replicates transfering Tan Sri Abu Kassim out of MACC to UiTM and maybe part-time at Akhbar Satar's HELP?

There is no "other women" in the US version. That is unless Loretta was a hunk.

There is already Comey.

The earlier DG for Special Branch, Dato Akhil was due for retirement but the controversy involves the transfer of Deputy DG, Dato Hamid Bador.

Hamid is known among law enforcement officials and his underlings in the police force as a man of integrity, responsibility and pleasant personality.

It does not jive that he could lose control to reveal intelligence information without approval of his boss. And, it is unthinkable and unjustifiable for intelligence officer to let their guard down.

He should have stayed at the new outfit at the Prime Minister's Department - Thames House of Putrajaya and build the outfit from scratch, even if it means from only a table and chair.

Anyway, he is heard to be enjoying a "healthy" retirement.

The US replica for SB will naturally be the CIA. And, the new CIA boss appointed by Donald was Mike Pompeo to replace outgoing John Bennan.

The controversy is not with John but Mike. He was asked by Donald to help it out on Comey's FBI probe.

So if Najib's mess was 1MDB and Arabs, then Donald's in the making is Russian-gate. Not even Ivana's donation.

He rest of the characters; Muhyidin, Mukhriz, Shafie Apdal, Xavier Justo, Matthias Chang, Khairuddin, Anina, and Hanif Khatri, is left to readers' imagination to identify the US clone. Quite sure there are many to choose from.

The difficult one to pick will be the fatboy Jho Loh.

Not many Chinese with similar background as him in the US, and more so, partying with a bevy of Hollywood young starlets.

As for Clare Brown, please not associate her with Barbara Walter or Diane Sawyers or Connie Chung. And, she remotely have the look or brain or spunk of Megyn Kelly.

The US have many living former Presidents to choose from. Off course none reached beyond the age of 90, but Bill Clinton would have been the best replica.

He fit in the description of a man with similar checkered past with a personal interest at stake, you know what we mean, but now eschewing virtues of good governance, democrasy and opposition against corruption.

By the way, Clare, here is a good spin you, you sloppy-conniving-lying Brit.

Najib and Donald were together at the US-Islamic Summit in Riyadh hosted by King Salman. Bet you didn't think about spinning Najib met Donald to sort out together the DOJ case and FBI probe.

Suggest you spin Donald's favourite PM changed the SB top personnel to help Donald win the US election with intelligence sharing but Russian get the blame.

Who knows you might be able to drive a wedge between Malaysia vis-a-vis US and Russia.

You are already looking awfully stupid as your cover and lies are blown bit by bit, but this time, it will be for real!

Wasn't Ms Clare supposed to get sued big time by PAS dll? Still waiting for the curtains to lift on that one.

Meanwhile the investigations in Singapore are still continuing? No one has called a halt to what's ongoing?

So I'd hold on the celebratory back slaps and highfives for the time being.

We are all still waiting. They should not be holding out on evidences. let it all out.

Another guy pleads guilty in Singapore in a 1MDB-related case (http://www.straitstimes.com).

Interesting how it's unfolding slowly south of the Causeway.