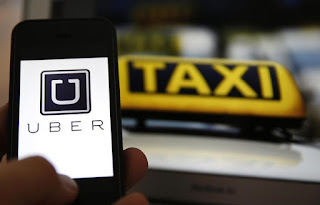 It happened before with one mode of public transportation when undercutting existing regulated services and low price is a priority over other considerations.

It is a matter of time something happen to Uber or Grab or any of this new ride-sharing innovation and convention-challenging mode of public transportation.

In January, the complain was Uber, Grab drivers becoming ulat at KLIA and KLIA2 to encroach into designated areas meant for taxis.

In the latest incident, a pregnant lady riding an Uber last week was robbed and suffered a miscarriage. That will put any women into a long depression and into a state of fear. She claimed the driver had an accomplice seating in the front seat

Malaysians being Malaysians, their automatic reaction is to blame the government.

They conveniently forgot it was public pressure that contributed to the incident. Public insisted and supported Uber and Grab despite the unclear legality. The public refused to accept the concern on safety and possibility criminals infiltrating as part-time UBER driver.

And, public pressure and less-than-adequate existing services partly made it necessary to allow such services.

So it is unfair to blame on SPAD now. Do not claim SPAD is only now looking at safety concern. SPAD wanted to vet drivers before but Uber, Grab etc used every possible legal loophole to bypass laws and regulations.

Lawyers are of the view that the Uber victim will not win any lawsuit with Uber. Exclusion clauses and clauses and contractual obligation with drivers exclude liabilities to Uber. Their so-called air tight hiring policy is now questionable.

For the like of Dato Nazri Aziz that supported Uber because it is good for tourist and could not await for a reform of the taxi services, Singapore is already taking opportunity to badmouth Malaysia.

In Sabah, LPKP made the right decision last October to not be hasty and insist Uber drivers be licensed just like taxi drivers.

It is unfair for job needed-Sabah to have part-timers encroached into the livelihood taxi drivers.

The latest incident is followed closely in Sabah because Uber driver have been getting the attention for various incidents in Sabah - sad and embarassing ones.

Tourism is an important source of income for the local economy. Sabah cannot afford such incidents.

When Uber entered Sabah, it was a hot issue. The populist opposition leader and consumer groups urged LPKP to allow Uber. Darrell Leiking is campaigning on Sabah rights and interest, but have no care for Sabah taxi drivers?

In reaction, taxi drivers took the legal course of action to stop Uber. In turn, Uber fought back through a lawsuit by a passenger.

In Europe, EU court made a decision that it is falls under transportation services thus can be regulated. So regulate them!

The commercially driven Uber have not give-up. They have gone into partnership with Mahathir-aligned Ananda's Maxis for promotion.

Sabah LPKP have been socially supportive of taxi. Heard over the grapevine that they have appointed an IT company to design a similar system, or if not, a better one than Uber, to assist and level the playing field.

It would be something SPAD could emulate in Semananjong after the various measures taken to level the playing field including allowing private permit for taxis. Frankly, the Blue Taxi effort is not trusted. The Dato owner is a conman. 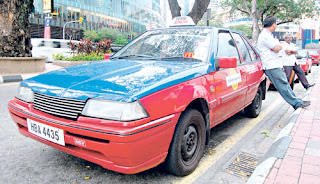 Be it in Semenanjong or in Sabah, taxi drivers must up-grade and improve their services with the times to take on Uber. As one letter that reached us (trying to locate source) complained:


Stubborn taxi drivers suffer from their own choosing

The number of protests by taxi drivers staged in the Klang Valley probably exceeded that of all self-employed groups in the country combined.

The reasons for their protests were always the same but have yet to offer valid arguments to further their cause.

In the past, they have targeted taxi companies for charging high rentals and no EPF and Socso benefits, forgetting that they are customers and not employees of taxi companies.

They chose to forget that no one forced them to pay several thousand ringgit and signed the rental-purchase agreement to rent the permit and purchase the vehicle, which they get to own upon full settlement of the loan.

Instead, they accused taxi companies for charging high rental when they should be grateful for being given the opportunity to drive taxi for a living.

Many of these taxi drivers do not qualify for taxi permit or bank loan. Many taxi drivers with own permits obtained their loans from taxi companies and do not complain of interests higher than banks.

After EPF has allowed the self-employed to participate in the retirement fund several years ago, their grouses turned to lack of safety net.

From June 1, all e-hailing and taxi drivers must be registered with Socso and covered under the Employment Injury Scheme, and will be required to pay between RM157.20 and RM592.80 a year for it.

It is certain there would be another round of protest, as what they have wished for will turn into their worst nightmare.

This time, the protest outside Parliament was against Grab and Uber for flouting the law and carrying out “illegal activities.”

But last August, the Cabinet had already decided to regulate e-hailing services and amendments to various laws are scheduled to be tabled in Parliament this month, making the protest superfluous.

Moreover, large number of taxi drivers had already switched to driving under Grab and Uber, and they are busy with many trips and earned more, even though rates are lower.

However, stubborn taxi drivers who wish to maintain the old ways when they monopolised services and passengers were at their mercy are unhappy with their change of fortunes.

They could easily switch to driving e-hailing services or buses earning higher income instead of taxis, but chose not to for various reasons.

They are aware that they will be bumped off by Grab or Uber should they continue with their antics. Their numbers are small but highly vocal, with 50 of them carrying placards and chanting slogans near Parliament House.

Members of Parliament pandering to them would be making a fool of themselves. It is time for politicians from both side of the political divide tell off recalcitrant taxi drivers.

Such an action would help to exonerate the majority of taxi drivers that have been treated with scorn by the general public because of the action of rotten apples in their midst.

They can often be seen ganging up to exchange heroics with one another on their success in ripping off passengers or to stage another protest.

Nearly all taxi drivers do not belong to any association and have no time for such activities. They work like ‘lone rangers’ and have no idea or interest on what others are doing.

After e-hailing apps are regulated, drivers will be required to obtain a “Public Driver Licence” or “Public Service Driver” licence similar to the current Public Service Vehicle licence and Driver Card, there would be less part time drivers.

This will benefit many metered taxi drivers in the Klang Valley, as many are elderly and do not use taxi apps. But they use the meter and deserve our support. 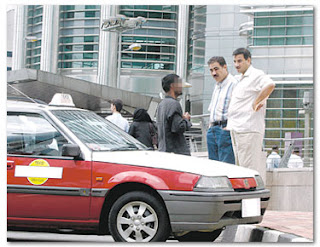 One can complain on these 'bad apple' among taxi drivers. However, the enforcement authorities need to buck-up and be brave enough to implement the regulations.

Apparently, observers claimed hooligan taxis preying on innocent tourists in front of KLCC are still at large. Enforcement officials are too afraid to take action and could only watch the cheating and harassment on other law abiding taxi drivers. This is unfair!

The call to quicken the amendment to regulate Uber and Grab was made by the Minister of Transport back in November. Hope it will happen soon.